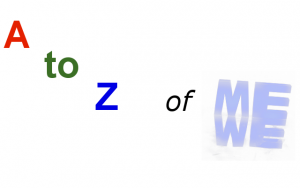 You’ll see ‘A to Z of Me’ posts on many blogs lately. Thanks to Naomi over on Dr How’s Science Wows for the tag to take this alphabetical challenge, all about ME.

A is for Alphabet and Author – My first ever published book was an Alphabet book for my son.  I am slowly getting around to hitting ‘publish’ on some new ones.

B is for Beach – I love beaches as you might be able to tell by all the beachscapes I’ve taken photos of.  It’s the quiet and isolated coasts that I love – on a nice mild sunny day, a brisk wintry day, or even a ‘soft’ Irish day.  There’s something calming about all that space.

C is for Cuidiú – Cuidiú is an Irish group that provides education and support to parents.  Breastfeeding support groups, baby & toddler coffee mornings, information evenings and any excuse to meet and chat with other parents.  We’ve made so many good friends because of Cuidiú.

D is for Dublin and DCU – Dublin is where I live, and DCU is where I went to college.  I’ve never lived anywhere else (so far) despite my best efforts!

E is for Elope – We didn’t technically elope because we informed our families of what we were going to do… but we did run off to a tropical island to get married on a beach.  Just the two of us (and the legal officiaries).

F is for First Five Individual Award – The one and only real award I ever got/won.  Every year the work of five members in DCU’s many Clubs and Societies is recognised with this award.  The competition is tough!

G is for Gadget – Despite best attempts to declutter, we still have an insane amount of gadgets in our house.  The latest include a chromecast, apple tv and bluetooth media player for the car.

H is for Home – We own a house and have been renting a house elsewhere.  We’ve started the long battle to sell our house and buy one on the right side of the city (for jobs and family).

I is for Introvert – I’m often happiest in my own company.  Which is bad news when you’ve a toddler following you around 24/7.  I find it hard to make close friends and often my shyness is mistaken for being aloof.  Being a mother has forced me to put myself out there more.

J is for Jumping – I have a very excitable toddler who loves to jump.  I love a good rebounding exercise class myself.  Last time we encountered a trampoline, we were still jumping on it together an hour and a half later.

K is for Kindle – I’ve been an avid reader since I was a child.  Known to take 12 books from the library for a weekend in Wexford and still run out of reading material.  When we decided to go travelling around the world for three months, an ebook was actually essential for me to bring.

L is for Laser Eye Surgery – I got my eyes done just after finishing college, and it’s one of the best things I ever did.  Despite my squeamishness, it wasn’t all that bad and I have 20/20 vision since then.

M is for Mama – Being a mother has inevitably become a significant part of my life since my son was born.  I hear Mama, Mammy or some other version constantly all day long (and in the middle of the night).

N is for Novel – Don’t we all want to write one?  It’s said that everyone has one novel in them.  That might be true, but it’s debatable whether they’re all novels that anyone else wants to read.  Eventually I hope to get around to self-publishing a novel that never gets read by anyone else.

O is for Openness – I try to be open to new things.  I often fail.

P is for Private – I’m quite a private person.  So it’s probably a terrible idea to have started writing an online blog…

Q is for Quiet – I like peace and quiet.  Something else that’s in short supply these days.  Lately I’ve tried some mindfulness/meditation and find it good for clearing my head.

R is for Rain – will it ever stop?  I really should emigrate somewhere drier…

S is for Software – The closest I’ve got to writing for a living is writing software.  There’s a kind of art to crafting good code.  We even have colour-coded editors these days to make it all prettier!

T is for Travel – The original reason I started this blog.  I love seeing new places (though not so fond of the actual getting there part).  My son is an extremely well-travelled toddler already due to our inability to stay in Ireland for long without getting itchy feet.

U is for Unfit – my usual state of fitness these days.

V is for Volleyball – I discovered volleyball in college.  It’s a minority sport here. So few players that I found myself playing recreationally with members of the Irish squad every summer.  I was a member of, and ran the Volleyball Association of Ireland’s Competitions Commission for a few years – quite the education in politics and organisation.

W is for Writing – I love to write.  It was soul-crushing to be told in English class to stop writing the creative pieces I enjoyed and got good grades for, and start doing discussion essays.  This directive was because “It’s too hard to get full marks for creative writing in the Leaving Certificate, you’ll easily get them for a discursive piece”.  That about sums up one of the biggest problems with the education system for me.

X is for XML – or eXtensible Mark Language.  I’ve dealt with a lot of this stuff in my career.  It’s a necessary evil.

Y is for Yoga – I’ve been doing Yoga on and off for years.  I think it’s one of the best forms of excercise you can do.  I loved Pregnancy Yoga and Mum & Baby Yoga.  As a friend said “I’ve known some of these babies since they were bumps!”.  The most convenient class for me at the moment happens to be Hot Yoga which I like a lot more than I expected.

Z is for Zest – I hope my son continues to have as much zest for life as he does now.