A visit to Lisbon Oceanarium

So what is there to do in Lisbon?  Well, the top destination if you’ve got kids has to be the Lisbon Oceanarium.  It was on the other side of Lisbon, but the metro stations made it very easy for us to get there.  We went through the Vasco da Gama shopping centre and into the Parque das Nações, which was developed for the 1988 World Exposition. It’s a short walk along the marina to get to the big industrial-looking structure that houses the oceanarium.  The tickets for for a visit are pricey, but it was definitely worth it for us.  The Rascal had a great time at it. 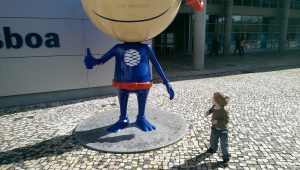 The oceanarium is the largest indoor aquarium in Europe. It has a large main tank in the centre, and 4 smaller ‘habitats’ surround it.  North Atlantic, Antartic, Temperate Pacific and Tropical Indian.  There are two levels circling the main tank and taking you through the four habitats with different views at each stage.  One of the aquarium’s claims to fame is that they have a notoriously difficult to care for sunfish inhabiting the main tank.  And that main tank is definitely the star of the show.  It’s massive.  There are big viewing windows on each side where visitors congregate to watch the big array of fish constantly in motion.  There are also small cubby-hole spots with smaller viewports where you can pause for a more peaceful break and watch the inhabitants passing by.  It’s not quite the same as being out in the open ocean floating over a reef bursting with wildlife in the Whitsundays, but it’s definitely a lot drier and child-friendly!  It’s a great sight to see schools of fishes swimming about in the formation of a large fish, while sharks and manta rays circle below, and the monstrous sunfish lazily passes by. 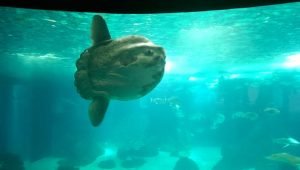 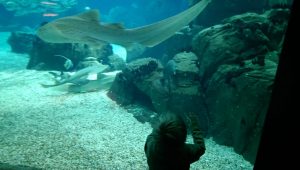 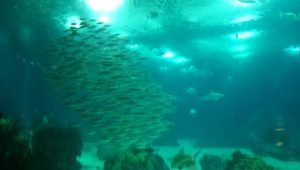 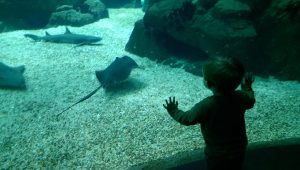 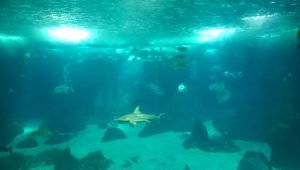 We’ve been a couple of times to the zoo in Dublin, but the Rascal has been distinctly underwhelmed by the experience.  He does love animals, but it can be hard for a young child to easily see everything in the zoo – especially when the animals have wandered to the far side of an enclosure, or are trying to shelter from the weather.  The big advantage of the oceanarium is that your child can walk right up to the tank and see fish swim right past them!   Everywhere we went there were children with their noses pressed against the glass looking awestruck.  The Rascal flitted from one viewport to the next, bouncing in excitement as he saw yet another fish. 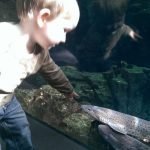 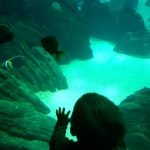 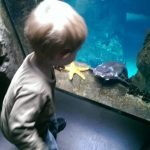 There were also birds and penguins to be goggled at.  A quick adventure up a wooden bridge through the ‘jungle’ was popular too.  He thought the ghostly white jellyfish in their dark tank were ‘scary’, but was fascinated to see their luminescent cousins across the way.  There were frogs and lizards, crabs and starfish, seahorses and fish of every shape, size and colour. 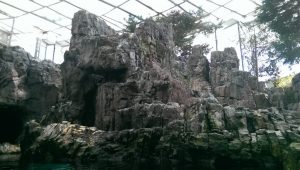 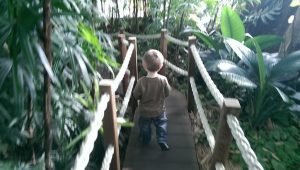 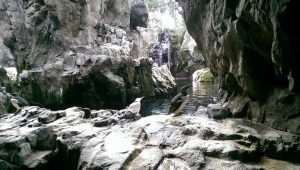 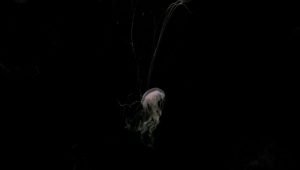 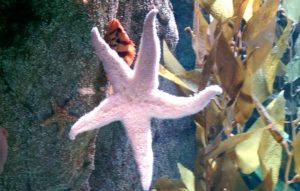 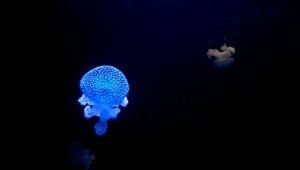 With all the excitement, the Rascal was fading fast as we left the Oceanarium.  After a quick food break we were ready to head back to the hotel.  But first, we treated ourselves to the exorbitantly priced cable car trip up over the park and back.  It offered a good view of the park, shopping centre and Vasco da Gama Tower (tallest building in Lisbon) on one side.  The Bridge Vasco da Gama stretched across the water on the other side.  We all enjoyed the novelty factor.  Though in hindsight, we could have just done it one-way, saved a little money, and the walk back to the train station would have been about the same.

This is a great trip to do with kids in Lisbon.  The adult tickets were expensive at 14 euros each, but children are 9 euros, or under fours are free. If you have a higher ratio of kids to adults it will work out better, and there are family tickets aswell. It’s best to book online in advance to avoid queues, though it was actually very quiet at the time we went so wouldn’t have made much difference.