The moment we set foot outside the airport in Auckland, it felt like we’d returned home. From the temperate climate of Hawaii, we were now in the chilly New Zealand springtime. And boy was there a lot of rain. Auckland is a large, sprawling city at the top of New Zealand’s North Island that seems to expand forever. Originally composed of four cities, there’s a minimum of high rise buildings. Instead, the suburbs spread out across the hills. While Auckland seems like an impressive city, we had limited interest in doing too much exploration in the rain. At this point in the trip we’re becoming more immune to each new city we reach, and more interested in taking it easy. We were booked into the BK Hostel on Karangahape road which is in the heart of the city. We discovered a few nice restaurants to eat in along Queen St which has a wealth of dining options. Mostly though, we focused our couple of days on seeing more of outer Auckland. Heading away from the city, it doesn’t take long to get out into the great open spaces that attract so many to New Zealand. 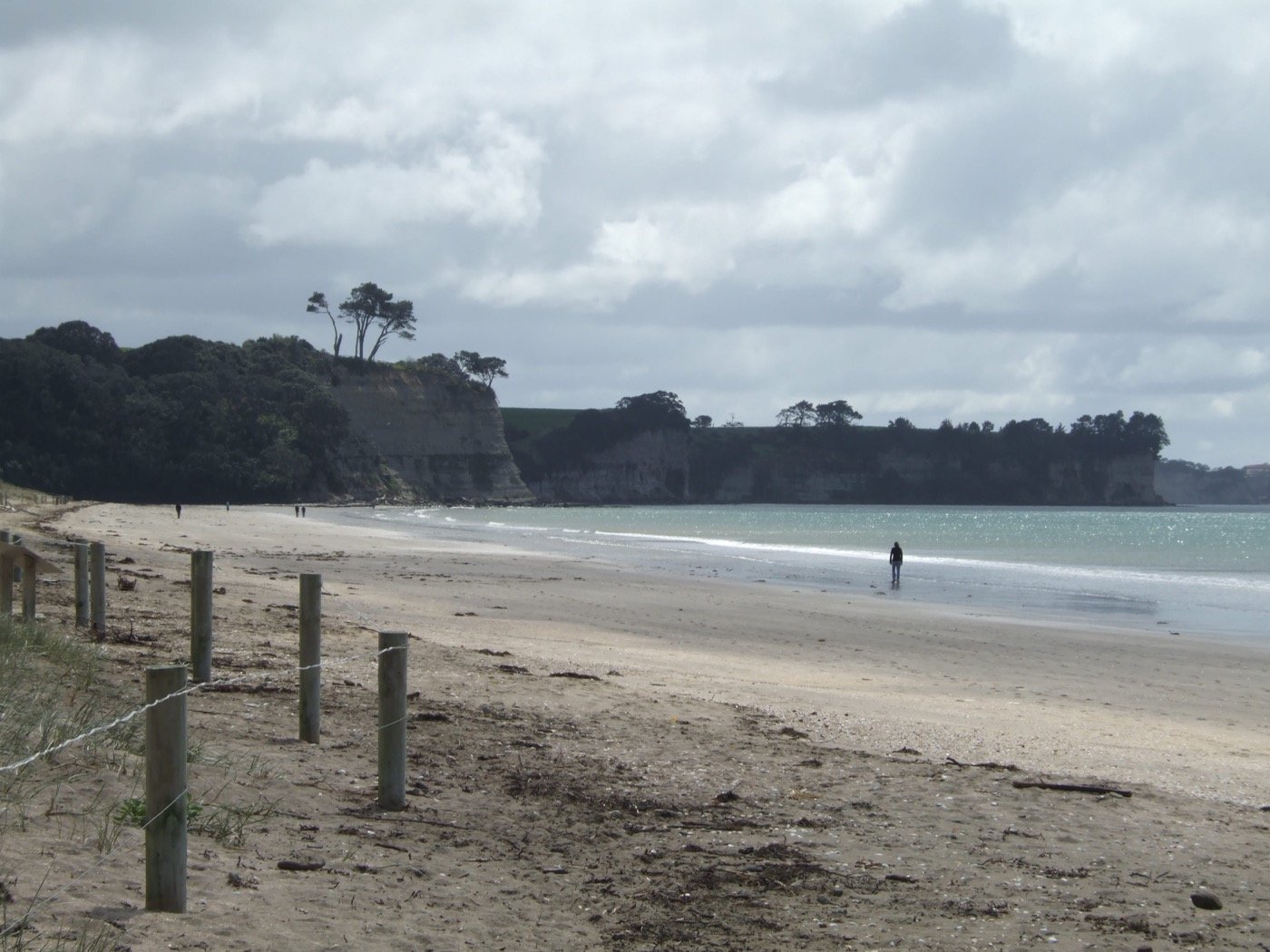 Our first choice of destination was Long Bay Park, just North of Auckland’s suburbs. We were able to catch a local city bus, Northstar 839, at a return fare of about $8 each. This wound through suburb after suburb, following the hilly terrain going up and down, back and forth, until you lost all sense of direction. It did give us a good look at some typical Auckland suburban living, taking about an hour to reach the park at the final stop.

Long Bay Park overlooks the Hauraki Gulf. It’s a mixture of well-tended parkland and sandy beach. We hit it lucky with the weather which was dry, though a little chilly as the sun moved between clouds. Being the off-season, it was quiet and peaceful. We commandeered a picnic bench in the park with a good view of the sea for the afternoon. A nice location for catching up on emails offline, reading books, taking a stroll along the beach to see the beautiful scenery and generally relaxing. We had a tasty lunch in the Long Bay restaurant – including my first slice of Key Lime Pie, before strolling along the beach encountering mostly dog walkers. There’s a real sense of space along this stretch of coast just outside of Auckland’s suburbs.  This time of the year it’s time to beat a hasty retreat as soon as the sun starts to go down, so we caught the bus back to the city as darkness fell, bringing back the rain with it.

We got dinner back on Karangahape Street in the ‘Legendary Thai Restaurant’. Shortly after we arrived, the only other customers disappeared off and it became the Amazingly Empty Thai restaurant. In the absence of anything better to do while waiting for our food, we had a lengthy debate as to the gender of the person serving us. This was never actually resolved one way or the other. The food proved to be tasty if a little too spicy, but after sitting in an empty room staring at the waving cat on the counter for 30 minutes after we finished eating, we really wanted to pay our bill and get out. I’m not sure how much time passed before we finally enticed someone back out to the front of the restaurant. When my credit card got rejected we flung some cash at them and backed out of the door as politely as was possible.