We’ve spent a few days now in Spain, and urban life just isn’t agreeing with the Rascal. He’s starting to lose his tenuous grasp on sanity at being so confined. He sees every room we stay in as an invitation to find innovative ways to break furniture, or parts of his own body. He craves large open spaces. When we take him out and he sees a clear stretch of path ahead that’s it – he’s gone. Takes off like a bat out of hell. Due to disrupted sleep, his sprints are more like a dangerous drunken driver out of control in a race car, lurching around hard objects and barely missing disastrous collisions. Occasionally he changes tack, hangs back and berates us for walking ahead of him. “Whoa whoa whoa”, he yells. “Come back here!” Take a guess where he got those lines from… evidently he can hear us pleading that he slow down before he hits the pavement, he just doesn’t care. What seem like reasonable demands from us sound like a total mockery coming from the mouth of a toddler. The next location on our travels is Bilbao, home to the Guggenheim. We have a two night stop-off here on our way back to Santander to facilitate a visit. Bilbao is a far cry from San Sebastian. It’s a big bustling city on the banks of the river, away from the coast. The winding narrow streets circle ornate churches before emerging onto the riverside. It has an old quarter just like San Sebastian which has a few burger bars in addition to the rampant tapas restaurants. We end up having burgers both nights. All of us are delighted with the dinosaur toys the Rascal is given to play with by the waiter in Hatani. That buys us extra time to wait for the food in relative peace. The burgers are massive, though very very rare. The Rascal steadily demolishes a plate of crispy fried chicken. I find myself coveting my son’s fully-cooked food. He’s not inclined to share. The dinosaurs look friendlier when I hopefully enquire whether he really wants all that chicken. We’re staying in an apartment close to the old town. It’s got a pull-out double bed and a sofa so we all get a bit more sleep at night. There’s a welcome washing machine. There’s a hob, toaster and crockery. The total lack of any cutlery is rather perplexing though. And downright irritating when it comes to trying to actually have a meal. We may have had to do some pilfering from other places to enable a breakfast of tea and toast in the mornings. And the noise. It’s like a ghetto street party outside every night. As we walk through the neighbourhood in the evenings the doorsteps and any low walls are thronged with youths sitting around and calling to each other. Not the kind of area you fancy wandering about in the day or night. Exploring into other parts of the city reveals that there are playgrounds here, but they’re a grimy version compared to the squeaky clean San Sebastian ones we’ve been spoiled with. 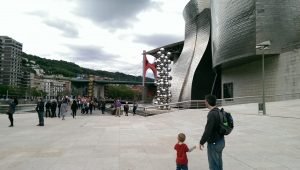 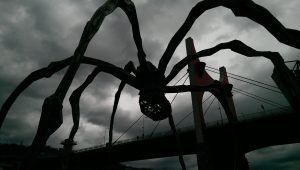 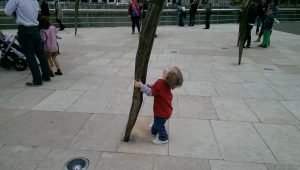 Further down the river is the shiny Guggenheim, easily reached on a tram. We join the hordes of tourists swarming about. There’s plenty to see outside the building. Water fountains, strange sculptures, gigantic metallic spiders, and to top it all off… a creepy mist that periodically billows up from the lake to envelop everything. It’s worth a visit to walk around the outside . We rub shoulders with the semi-famous as we spot a Downton Abbey actress picking up a bit of culture too. Gaining entrance to the museum involves a lot of queueing before we’re parted with our bags and a chunk of money. In exchange, we’re gifted white audio tour sticks to guide us about inside. The Rascal enjoys running through the massive curved steel walls. We fiddle with the audio tours before deciding that we don’t really need the 30 minute long walkthroughs for each section. The Rascal is happy to take possession and wave them about threateningly at slow-moving tourists. 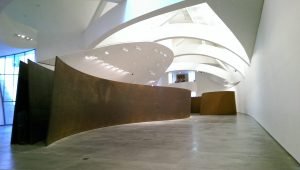 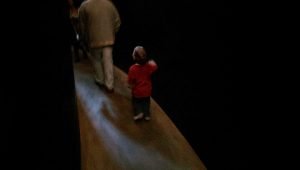 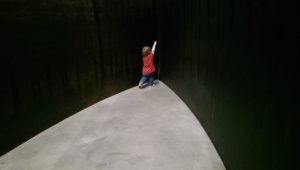 The initial halls are spacious and fun to explore, but the Rascal looks perplexed as we continue on to the permanent displays. It’s getting harder to answer the inevitable “What’s that?” questions. “Um… somebody ripped their leather couch up and decided to hang it on the wall?”. He nods, accepting this as possibly being normal behaviour, and moves on to gaze at a collection of metal cooking ware hooked up to lights with jump leads. He stares for a few minutes pondering the meaning of art. Then the inevitable, “What’s that?”. After a few more exhibits I give up – “No idea. Don’t know. Ask your Dad?”. Unfortunately the Guggenheim isn’t the best place for a curious toddler. There are some parts that he can run free in, but in most rooms small wire fences cordon off the exhibits ineffectually. Convincing a toddler he can’t touch things just because there’s a flimsy tripwire in front of them isn’t easy. He loses interest fast as the exhibitions become more even more abstract. He signals in an unmistakeable way that he’s seen enough culture for one day. It’s all getting a bit ‘out there’ for my tastes too. We depart in search of another burger bar. Tick the Guggenheim off the bucket list. It’s safe to say that we leave Bilbao after two days without any very strong inclination to return. Definitely just a pit stop for the Guggenheim, there are much nicer places to stay. But the city phase of our holiday is now over, as is our time on public transport in Spain. It’s one last bus back to Santander where we pick up our rental car. This would be the car from the infamous rental fiasco, so we’re damn lucky to get the keys. We’ve had enough of cities now and are looking forward to hitting the road to explore the coast and mountains to the east of Santander.