How bizarre – Cats in Prague

Every so often in life you come across a situation that leaves you completely speechless, and not quite sure how to react. A recent discussion reminded me of one of the most bizarre things I’ve ever experienced. 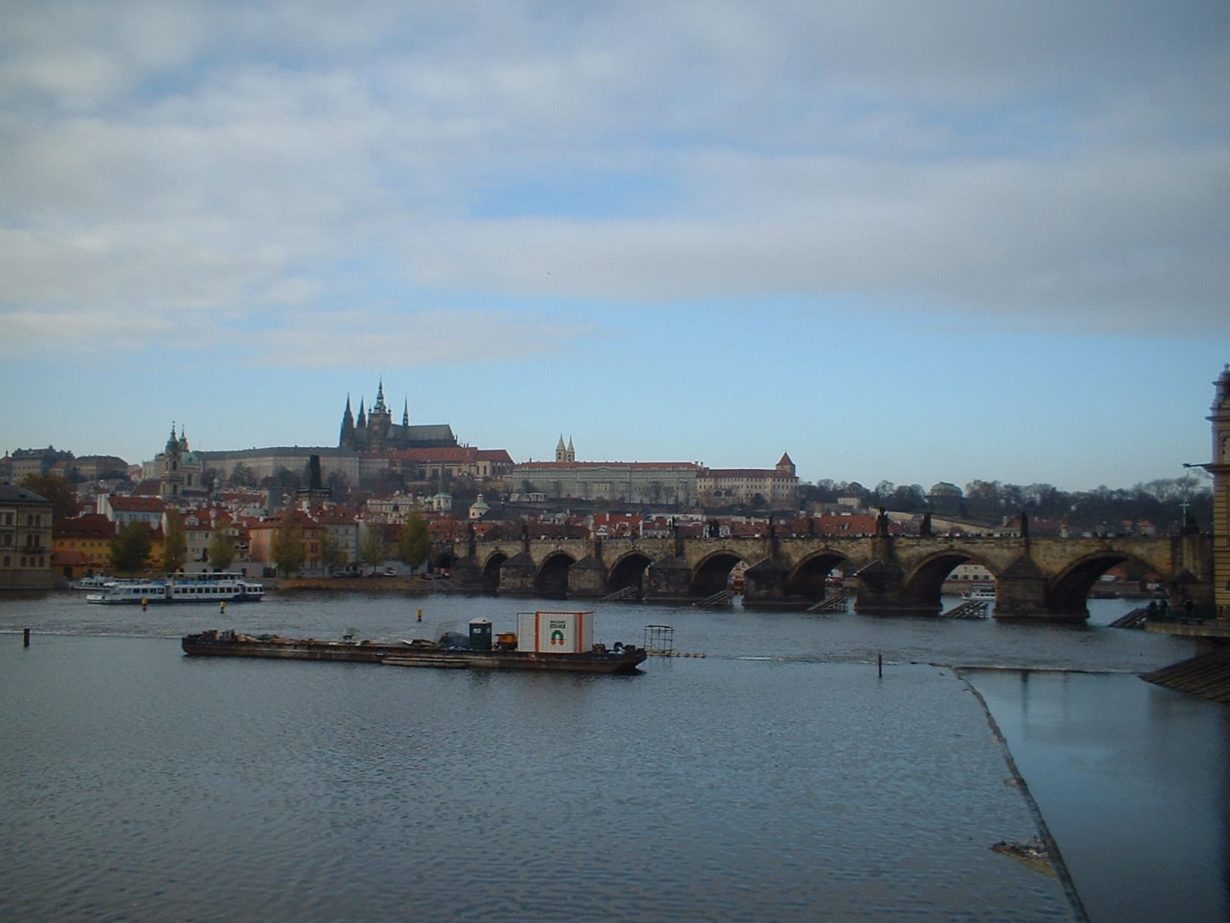 Many years ago back in 2004, when the husband was the boyfriend, we decided to take a city break to visit Prague. The trip itself was fine, but the return home was disastrous. We missed our flight home due to poor advice from our host on how best to travel back to the airport. The other half was technically starting a new job the next morning (same job, same building, different employer) and was unwilling to wait 24 hours for the next Aer Lingus flight and miss the first day.

So we had a nightmare journey back home via Stansted Airport. There we barely slept on the cold hard floor as rats scurried past, and emergency drills ran regularly through the night. It was all finished off with a visit to a RyanAir desk in the early hours of the morning where they unapologetically emptied our wallets and our savings account for a measly hour long flight back home so we could commute straight to work from the airport with no sleep.  This was the traumatic incident that prompted us to boycott all RyanAir flights for several years. Anyway, leaving aside the flights fiasco, Prague was a pretty city  to visit back then. We strolled through the streets admiring striking buildings and hobbiton-esque canals and bridges. It was early March and we were battered by icy winds as we walked about. Thankfully there were two things that Prague had an abundance of – coffee shops and bars.  Much time was spent sheltering from the bitter cold in coffee shops where I discovered it was impossible to obtain a normal hot chocolate drink. It was chocolate flavoured cold milk, or nothing, if you weren’t a coffee drinker. In the evenings we ate in various restaurants where we picked random items off the incomprehensible menus and hoped that something we considered edible would eventually arrive at our table. We then enjoyed live jazz music in the clubs before returning to our cheap and cheerful accommodation. 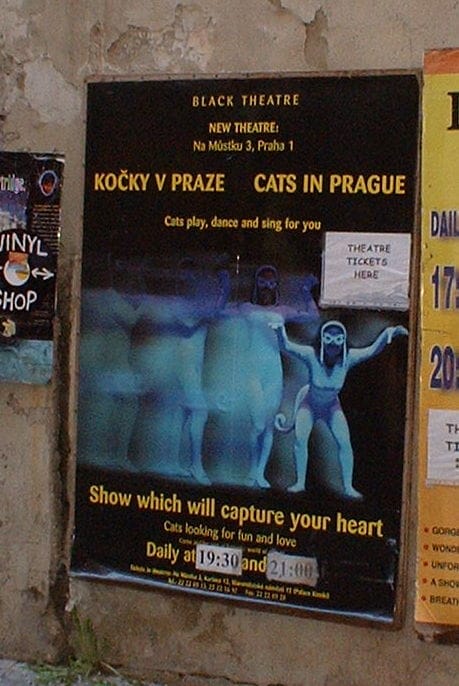 One day, as we strolled through the streets with no particular destination in mind, we passed by a small theatre where tourists were milling about purchasing tickets. Plastered on the wall outside was a poster for ‘Cats in Prague’.  It caught my attention as I’ve fond memories of primary school trips to see Cats. There’s an old much-used cassette tape of the musical somewhere in my parent’s house gathering dust. Due to a mis-spent youth, my companion had never experienced the show, or even heard the music. We had a bit of a debate outside the theatre about what this show actually was. Andrew Lloyd Webber’s name was mentioned on a flyer nearby, but it was very (intentionally?) unclear whether this was supposed to be an interpretation of the original show, or something else altogether. Being unable to communicate in the local language, there was no way of knowing for sure. Internet-enabled smart phones and tripadvisor websites were still stuff of the future. However the tickets were dirt cheap, and we had absolutely no plans for that evening so we decided we’d give it a shot.

That evening turned out to be one of the most memorable we’ve ever had. We wandered into the theatre and found ourselves in a small room with tiered seating and a stage at the front. There was a respectably sized audience, mostly other tourists of various nationalities. As we all seated ourselves and watched the performers getting ready on stage there was definite sense that no one was sure what to expect from this performance. The vast majority were clearly hoping for a bit of Andrew Lloyd Webber, but feeling very suspicious that something different would be delivered to them. You can already tell where this is heading, right?

The lights went down, the music started. Out on stage came a woman dressed as a cat, singing in some unknown tongue. I desperately tried to recall the opening chords of the Cats show while my boyfriend peppered me with questions about whether this was the real deal. I wasn’t 100% sure yet, but it was looking less likely by the second. Then, well… then the show really kicked off. Off stage went the cat lady, and up popped a bunch of cat hand puppets. Wait, what? Puppets? We’d missed the small, but vital, part about this being a Black Light Theatre. The fluorescent cat puppets glowed in the dark as they bounced and bobbed about to the music. The arms of the performers could still clearly be seen at times as they moved about in the not quite perfect darkness. The musical tone changed. The singing was replaced by a strange high-pitched chorus of electronically produced voices that gaily twittered incessantly.

Jaws dropped all around. “Eh, no.  This is most definitely NOT a version of Andrew Lloyd Webber’s Cats musical,” I informed my bewildered boyfriend. Just in case he might for a second think that what he was seeing now bore any resemblance or relation to that musical. And what we were seeing really defied description. My attempts will be merely a hint of the utterly brilliant insanity of what we witnessed for the next hour or two. “Cats on LSD” is the simplest description we came up with. And boy were these cats tripping. The performers were giving it all they had. The insane glowing puppets were energetically flying about in the air. The unnatural warbling grew more and more excited about something, though not a one of us had any clue what they were singing about. It looked like there might be a plot, however no one but the performers could understand it.  The audience just didn’t know what to do with themselves as the show trundled merrily on.

There were many reactions to what was going on on stage. Lots of whispered discussions were taking place around us, no doubt very similar to the one we were having. A significant number of customers were grumbling at a higher and higher volume until they eventually got up and stormed off out of the theatre in protest at the ridiculous sight they’d paid (very little) good money to see. Others were so stunned that they just sat there in disbelief until the interval when they could less obtrusively make their escape. We were in the final camp. The ones who gaped at the psychedelic midgets flitting about in shock, then found themselves rolling about in their chairs trying to suppress the fits of laughter. The couple behind us only lasted five minutes before the guy was guffawing so loudly that they had to reluctantly leave. The only thing more hilarious than the performance were the strong reactions from the audience.

We made it to the interval and filed into the corridor where we could try and put into words what we were thinking. More unsatisfied customers filed out the door into the dark wintry night, wondering what to make of it all. There was still a good third of the audience that returned back in for the second half though. We felt that we had to stay to the end, purely to see what on earth was going to happen next. Were they really going to keep it up for an entire second half? Yes, yes they were. The fact that the performers were taking their art so seriously, completely oblivious to either the disgust or amusement of the audience, was only adding to our enjoyment. It would be fair for one of the disgruntled customers that fled early to describe the show as weird, awful, crazy, insane, ridiculous, a travesty even. But it was one of the most inadvertently funny things we’d ever seen. Ever. Well worth the few euros for admittance. To this day, whilst we do recall a beautiful, picturesque city – the highlight of our visit to Prague was most definitely the bizarre genius that was “Cats in Prague”. We’ve yet to witness a performance quite like it. I suspect we never will…