Brisbane: Turning up the heat

Bang, pause… bang bang bang, bang, bang-bang, pause… bang-bang-bang, CRASH, bang-bang, door slam. Our first night in Brisbane was a rather sleepless one. The hostel is one of three close to the central train station. As we were planning on catching a train from there, it made sense to book accommodation nearby. Brisbane City Backpackers was the only one of the three to offer free wifi. Free wifi? We hadn’t heard that in ages! Considering we had no exit plan booked for Brisbane, that would come in useful.

Brisbane is a big city, and in keeping with that, its hostels are big, loud and brash. Staying in them is no quiet haven. We were on the second floor of a building filled with your average backpackers who are more interested in the nightly entertainment in the hostel than a quiet and comfortable bed. As the duty manager showed us to our room we passed the bar where someone was bellowing some kind of off-tune karaoke number that couldn’t be identified. Don’t worry the manager said, the bar stops serving at 11 and closes at 1. “Uhuh”, I said, unconvinced.

We were deposited in a reasonably spacious room with a spare bed and some welcome air-conditioning. I went roaming to procure some water while someone else murdered another song in the bar. Our first encounter with a fellow hostel resident was in the communal bathroom. After a few minutes of listening to someone cursing as they apparently fell off the seat repeatedly, a girl stumbled out, still talking to herself. She kindly pointed out a sink to me for no reason, then bounced her way out the door and lurched along the corridor back towards the noise. Nice.

Brodie was suffering from more twinges in his shoulder, so by midnight we decided it was time to get some sleep. At least that was the plan. I could swear the third floor was filled with a herd of overweight children that spent the whole night playing tag along the corridors, in and out of the rooms, and up and down the stairs with a nice big jump to skip the last five steps at the bottom. At a wild guess, the no noise after 10pm rule isn’t very well-enforced in this particular hostel. By the time the degenerate drunks had stumbled their way to someone’s room to pass out, Brodie was tossing and turning which developed into full scale muscle spasms. An hour later he had finally stopped thrashing and we had worked out the worst of the knots in his muscles. Dosed up with some paracetemol and a random non-prescription herbal pill that was supposed to ‘relax you’ on long haul flights, he eventually got to sleep. 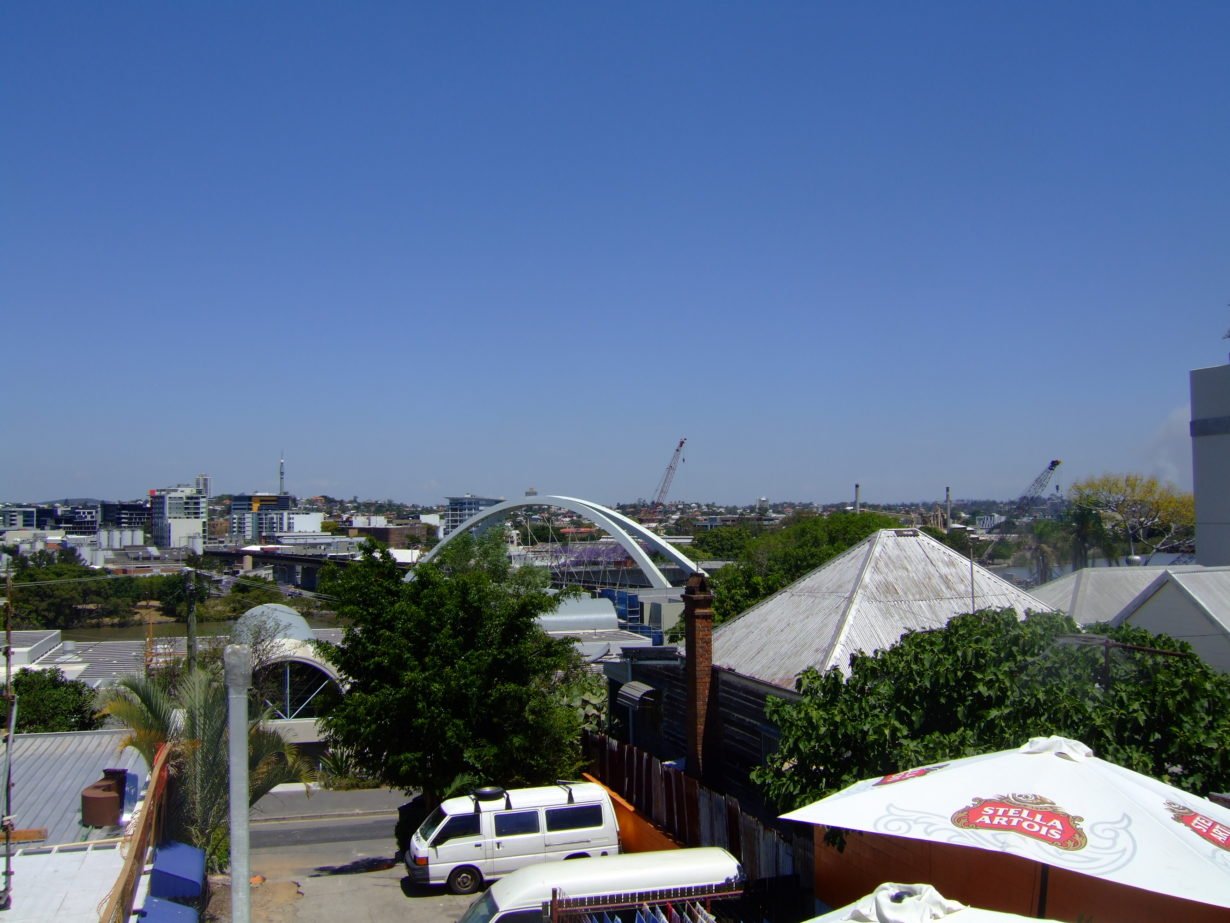 The following day we made our way to the central station to see if we could get some more helpful information on booking trains between Brisbane and Cairns. At the travel office we scored some brochures and a pamphlet for a special pass that lets you do multiple stops along the coast. Over coffee and doughnuts we confused ourselves calculating fares and timetables before deciding that the pass was for us, even if it might be a bit expensive to upgrade to a sleeping berth instead of a seat. The gruff gentleman at the booking desk turned out to be very knowledgeable and helpful, refusing to let us choose any options that might turn out needlessly expensive. We came out clutching two passes and tickets for the first leg of our journey. The 5pm train from Brisbane to Maryborough plus transfer to Hervey Bay. Each pass was $280 for an economy seat. As we go along we can choose to upgrade some legs to economy berths. This should give us an overall cost much lower than taking two flights, and spare us the pain of travelling overnight by bus. Surely sleeping on a train couldn’t be more difficult than sleeping in our current hostel?

Having sorted out our travel options and some accommodation for Hervey Bay, we headed into the city centre to see what Brisbane is like. In a word, it’s hot! Traffic was heavy even though it was still nowhere near rush hour. We shadowed the river part of the way, passing a plethora of bridges in all shapes and colours before crossing back into the shopping centre of Queen Mary Mall. There we found a vaccination centre and booked ourselves in to finally get all those expensive jabs and tablets we probably won’t need. After some browsing in the shops we took advantage of ‘happy hour’ to get two half-price juice smoothies to go with sushi and sandwiches from a food court in one of the shopping centres. We finished out our exploration by visiting the Botanical Gardens which border on the university. There’s a wide variety of plants and birds to see there.  The bleached colour of the grass can’t be hidden though, revealing how punishing the sun can be here. We’re bracing ourselves to deal with this kind of heat for the remainder of the trip, with some added humidity in Asia just to completely wipe us out. 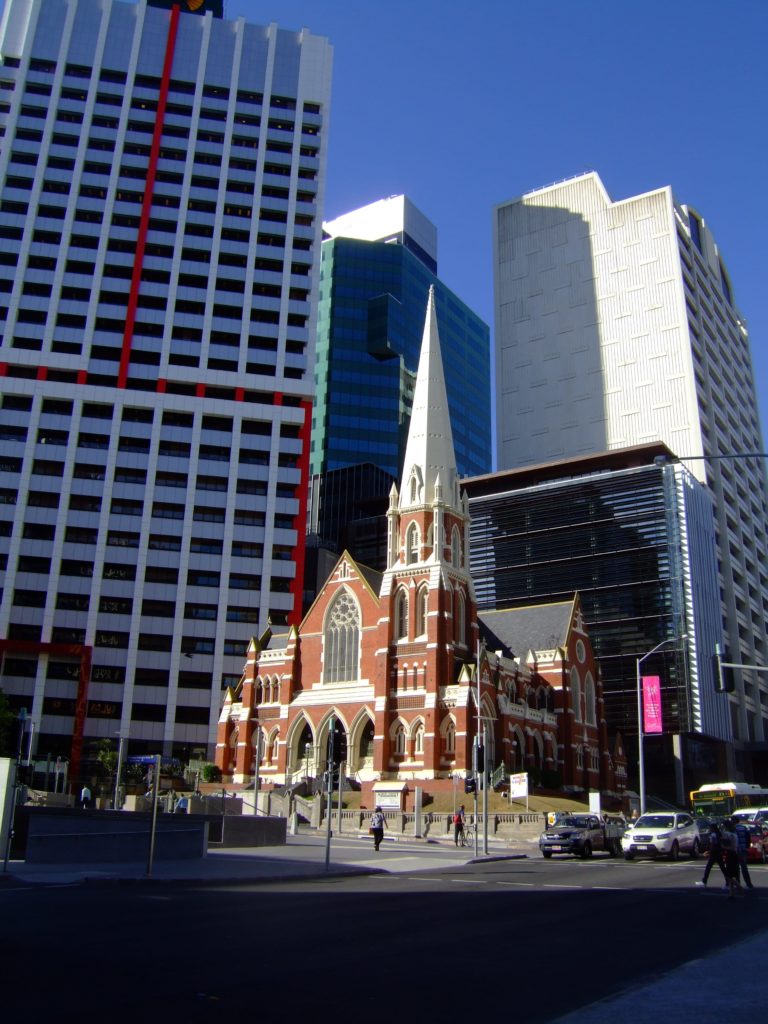 Wandering around Brisbane is a far cry from the quiet cities of New Zealand.
Like Sydney, Brisbane is a lively place with a fairly compact central area and plenty of parkland. However it doesn’t have seasons in the way that Sydney or Melbourne do. Hugging the shade of the buildings and darting across the sunny patches to avoid being scalded with the heat, I couldn’t imagine living permanently somewhere the sun feels like it’s actually burning your skin within seconds of exposure. Unfortunately Australian pedestrian lights seem to be the slowest in the world. In the absence of any nearby shade you just have to slow roast as the minutes tick by. This is a city where air conditioning is a must.