Sleep. Some days it’s all I can think about as I shuffle through the day like a zombie, accomplishing the bare minimum. After three and a half years it’s safe to say that I have accepted the fact that my first born is not, and may never be a ‘good sleeper’. Sadly others haven’t. “Has he really never slept through a night?”, wasn’t a particularly helpful question any of the multitude of times I was asked by my mother. After the first year of enduring ‘tips’ that I had already tried I would only offer a standard reply to “Is he sleeping?”, of “Oh you know, it just depends on various things. ” and would promptly change the subject. It still inevitably comes up, over and over. The suspicion hangs around that I mustn’t have tried all the bedtime routines that have worked for other children. I have. I know what would work best for his sleep. It would just mean sacrificing all of my sleep.

It took two and a half years for him to sleep through a whole night by himself. He has very occasionally repeated this performance over the past year – just to show that it’s possible. And maybe to remind me of what it’s like to get 3 hours of unbroken sleep before cruelly returning to form the following night. He likes space to roll around. So he has a big padded nest of a double bed that he still manages to fall out of sometimes, even when barricaded in. He likes his space, but he also likes to know that there’s someone nearby. Especially if he’s restless or feeling unwell for any reason at all. Unless he’s in a deep sleep, he periodically reaches out an arm and starts feeling for another warm presence. If he finds one then he gives it an affectionate thump before rolling back to his dreams. But if his questing hand only finds empty bedding, he shoots from the depths of sleep to instant wakeful wailing in mere seconds.

It’s not that he can’t sleep deeply. He does that at many inopportune moments. Just as we arrive somewhere after a long journey of complaining in the car. In the middle of a restaurant meal on holidays. On the bumpy bus. Late in the evening when a nap will inevitably mean being up past midnight. And when he goes into a deep sleep there’s no rousing him easily. If you do, you’ll pay for it. He gets that from his father. Both will sleep through deafening thunderstorms without budging. He also gets the restless shuffling about while trying to get to sleep that destroys the chance of anyone nearby getting some rest before they do. The hatred of sleeping alone. The deep unignorable snoring, and the ability to start sleep talking as soon as anyone else finally gets to sleep themselves.

Me however, I’m a terribly light sleeper. I just want to be left alone all by myself in a bed to get some rest. And if I know that I’m likely to be woken during the night then it takes me even longer to get to sleep. I sleep lightly, my body ready to spring into action at the first sound of whimpering next door. So it sucks to be me with the sleep-talking active sleepers. They usually take shifts. My husband has settled down by 2am, the child takes over for the remainder of the night. I shuffle between beds, mostly wishing I could sneak off for a full night of sleep alone. In fact I have been known to spend a couple of hours on the uncomfortable sofa bed voluntarily just to get some peace. Then we moved house and the choice is one bed or the other. The ‘obvious’ solution of putting them in a bed together fails utterly as both of them prefer to abuse others in their sleep. They’re not fans of actually receiving the abuse themselves.

And now in recent months there’s another one taking their turn. As one child pushes his feet against my thighs in his sleep, another thumps back somewhere in my cramped stomach. Reminding me that even if the firstborn miraculously starts sleeping from dusk to dawn… there are still at least a few more sleepless years ahead of us. I have a few friends whose second child was born entirely different to the first and slept for hours at a time from the very start. Minimal parental effort. If I could, I’d order one of those. However as far as I can tell, number two is extremely active, also likes to kick me awake, and is definitely a night owl. So I’m not counting on things changing much any time soon.

For now I just focus on getting an odd night of decent sleep here and there. Maybe a catchup nap at the weekend. I try and go with the flow. What works one week, fails miserably the next. Fighting it doesn’t help. You grab your sleep where you can and make the most of it. We’re now lifting the child at midnight to use the toilet which did end the 4am toilet visit and resulting couple of hours to get back to sleep. But after a few peaceful nights we inevitably returned to the tossing and turning anywhere from 2am onwards.

The child also won’t actually get out of bed himself. He wails until I appear. And it generally must be me that appears. After a night of virtually no sleep, if I make it back to my own bed for a few minutes before morning he will insist that I return to dress him before considering a handoff to his father. We had a ‘breakthrough’ the other week and convinced him to be carried in for a cuddle with me in our bed at 7am. A few days later we were woken abruptly as our bedroom door crashed open and he ran in looking delighted with himself. He’d finally figured out that he can come to us. It’s not that we hadn’t told him this, he just hadn’t accepted it as a viable option. My husband thought this was great progress. Until I reminded him that ‘morning time’ for children can start as early as 2am. And that on no holiday ever have we returned well-rested from sleeping with three in a bed. 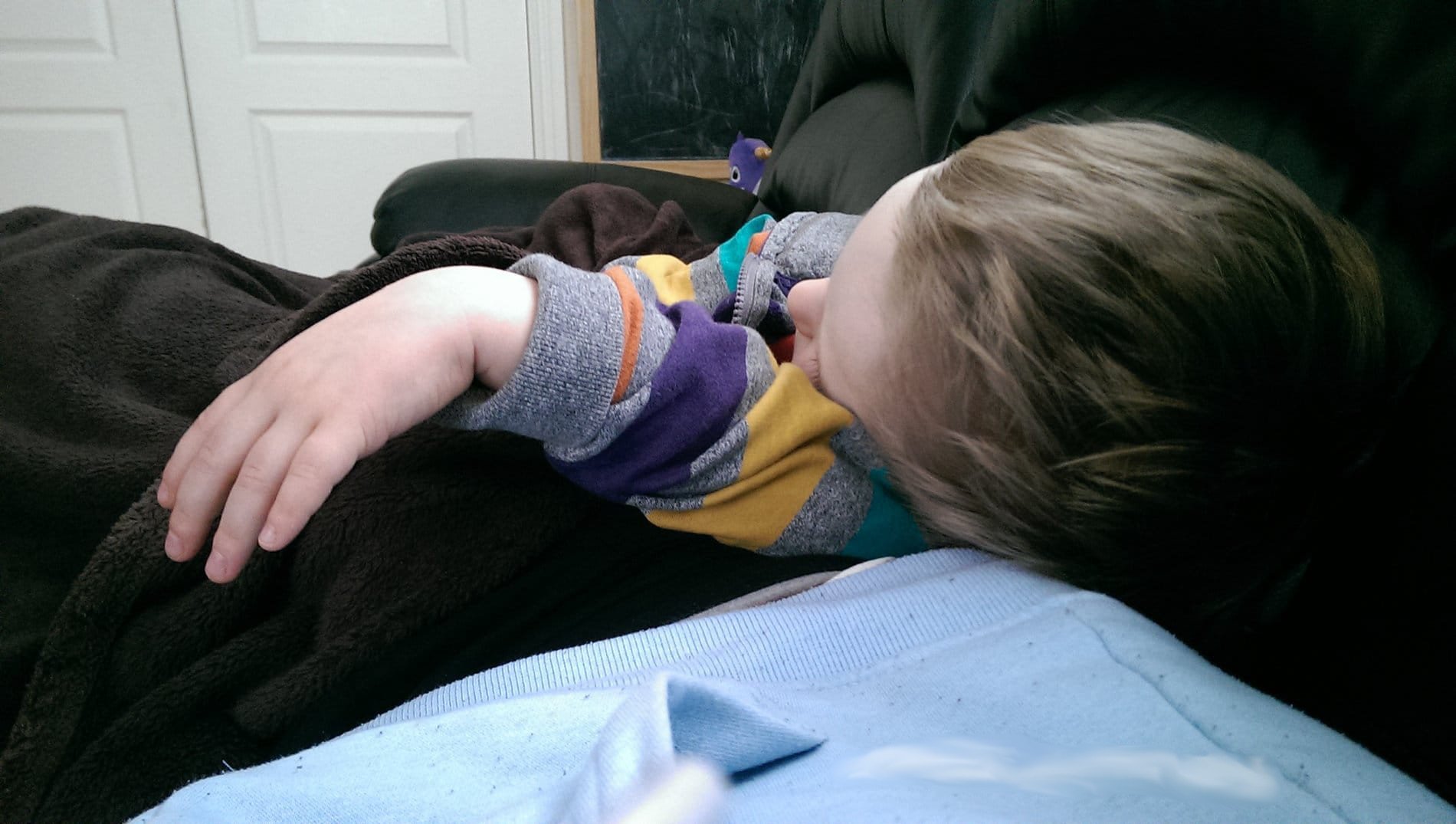 The following night it was back to the usual routine with a week of snuffling and coughing himself awake all night. The occasional bit of vomiting to add a bit of variety. I was tired enough to mostly sleep anywhere. Every morning I’ve been kicked or smacked awake if I was actually dozing by 6am. He’s in the bedroom with the ‘sticky’ door since we got new carpets. I’ve given up on sneaking out and closing the door as the sound of door brushing carpet is like an alarm to him that he should wake and investigate immediately. Chances of him sleeping until the light coming from the hallway rouses him are minimal anyway. I leave it open.

Last night was a ‘good’ one though. He wailed at 2am. I spent twenty minutes lying with him until he stopped checking for me in his sleep and the snoring got heavy. I had at least 3 full solid hours of uninterrupted sleep before our bedroom door opened and he ran in, clambered up into the bed. “What time is it?”, I whispered to my husband. 6am. Not too bad. To my surprise the child snuggled up and passed out in minutes. I relocated him to the safer middle of the bed. He stretched out to sleep more comfortably on top of me rather than share his father’s bed space. In the interest of fairness, he aimed the occasional accurate kick at his father’s crotch until he woke for good at 7am and we all got out of bed for the day.

It was a bright, sunny (cold) morning for a change. I was feeling positive. “That wasn’t too bad”, I commented to my husband as we made breakfast. “At least he slept for another while after coming in”. “Did you actually get any sleep after he arrived?”, asked my other half incredulously, looking less than happy with the start to his morning and gulping down coffee. Of course I hadn’t. But at least the child wouldn’t be be overtired by the afternoon. I take my wins where I can. I was forgetting that 6am was an early start for an overworked husband who usually gets up at the last minute to race out the door for an 8am bus. 6am is often when I finally get back to sleep for an hour, maybe two if the child decides to lie on a little. The good night for me, was a bad night for my husband. Sleep. It’s all relative. Is anyone getting enough of it? 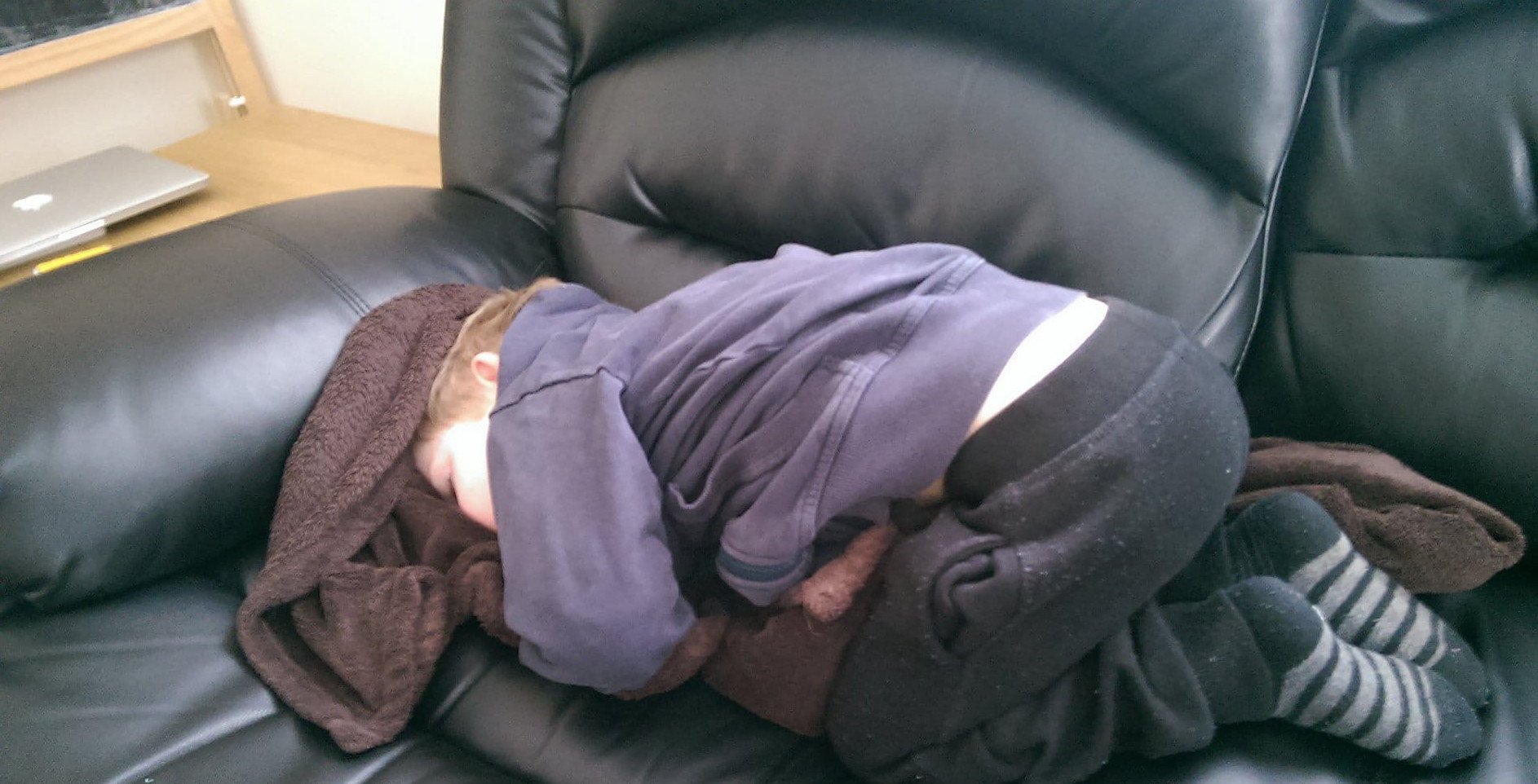