Christmas memories past and future

Christmas is a memorable time of year – for children in particular.  It’s the most magical holiday of them all where feats of sheer impossibility become achievable in one night.  There’s all the sparkle and glitter; from a tastefully minimalist tree, to obscenely decadent flashing lights and gaudy decorations everywhere.  Snowmen soar high above in shopping centres.  Christmas carols assault us from all directions.  It’s all about goodwill, presents, food, music, family,  and fun times.  It’s even more special on that rare occasion when there’s a blanket of snow making a real life Christmas scene outside while you’re warm and cosy indoors.   It’s hard to beat the excitement as the big day slowly approaches.   Then suddenly it’s all over, and there’s another long year to wait for that warm fuzzy feeling to return.

My earliest Christmas memories include the serious business of selecting and decorating an appropriately grand tree.  With four of us

children involved in the decorating process, it wasn’t always easy to get agreement on what it should look like.  It also meant it was rare for any decoration, no matter how hideous, not to make it on to the tree somewhere.  Christmas tree lights back then were even more fickle pieces of plastic than they are now.  Many a tedious hour would be spent painstakingly tracing through the wires and adjusting each individual bulb in the hope of finding the broken piece(s) in the line causing the entire string of lights to fail.  My father would be up a ladder in rooms and hallways attempting to string up just one more piece of tinsel whilst everyone else directed him to raise and lower ends for the best effect.

We were banished upstairs on Christmas Eve night while my parents

began the serious business of sorting four piles of presents for the next day. Each of us struggled against the rising excitement and anticipation knowing that we had to get to sleep in order for Santa to show up.  I suspect my parents began to seriously regret the tradition of Santa leaving our presents on the foot of our beds.  It became evident that I was just as light a sleeper as my father.  On many occasions I caught my mother just ‘checking to see if Santa had come yet’ in the early hours of the morning.  Obviously there was no sleeping in to be had the next day for her!

Christmas morning meant an abundance of presents.  First the Santa stockings were ransacked as each child awoke.  The thrill of reaching into a bag and rummaging about to select the next interesting shape, dragging out the experience as long as possible.  Once everyone was awake and ready, we’d race downstairs and take turns handing out all the presents under the tree.  My mother was a believer in lots of little bits and pieces, so the gift exchanges and comparisons could take quite some time.  Paper rustling and ripping, until finally there was nothing left under the tree.  Then we all piled into the car to join the other grandchildren invading my grandparent’s home.  Some cousins we saw regularly, others not so much.  Adults mingled with clinking drinks in hand.  Younger children chased each other about.  The (almost) teenagers sat awkwardly making small talk with cousins they barely recognised and might not see again for another 365 days.  One year you’d see them sporting Christmas jumpers, the next all white and pale dressed in goth black.  One by one, fourteen grandchildren would be spirited off into a room with Granny where they’d receive the last of their presents.  Hopefully the right one!

Once all the relatives had run out of things to say, the designated cooks would start looking at their watches, calculating turkey cooking times.  Families would start leaving to prepare for their Christmas dinners.  We would depart promptly to set up the house for our grandparent’s arrival.  Helping my mother with the logistics of a meal for eight, where one of the participants was my quick-to-comment, ever-sarcastic grandfather.  The smell of roasting meat hung heavy in the air.  Regardless of how flustered and flushed she was by the time we all sat down to eat, Christmas dinner was always a fond memory.  Turkey, ham, roasted potatoes, all the trimmings.  There was something to everyone’s taste on the table.  With bulging full bellies we’d retire to watch a Christmas film, leaving my father and grandfather to smoke their traditional foul-smelling cigar.

Three generations would then sit together in front of a crackling fire.  My grandparents would soon start to doze as the film played on. We’d then switch to something they’d no interest in watching.  There was always a Star Wars film on somewhere, even back in the days of limited TV channels.  We’d settle in with a box of chocolates, treading ever closer to the fine line between complete satisfaction and sickly overindulgence.  An hour or so later one grandparent would start awake, poke the other back to life, and off they would go into the night.  By now we were at the dregs of the day.  Feeling desperately sleepy, but reluctant to slink into bed and let it end.  It might not always live up to our lofty expectations, but Christmas was always a most special day of the year.

Over the years traditions have changed.  My grandparents passed away.  Having a boyfriend, then husband, whose birthday fell on

Christmas day forced new traditions too.  There was utter shock at the revelation that he’d never seen ‘The Snowman’ until he met me. For a time we joined my aunt for Christmas dinner and post-dinner party games.  Then siblings and cousins began to travel across the world, not always making it back to the homeland in December.  Cousins started having children, growing the numbers crowded around the table, until we split back to separate family dinners.  We saw less of our extended family as a result.  Christmas parties where we would meet old friends became a bigger part of the fun of Christmas.  Christmas Day would always be special, but it slowly lost the pure magic and sparkle of my childhood as the years went past and we all grew older and wiser.

There’s no denying that the magic and mystery of Christmas is really for children.  I just don’t

get the same sense of excitement and awe that I remember from years ago.  It lost the innocence of childhood and become more commercial each year.  The decorations dusted off as soon as Halloween was officially over, forcing us into the Christmas season far too early.  I tired of the incessant carols and offensively bright decorations plastered across every shop window in November.   Braving the hordes of Christmas shoppers is tedious. Finding the ‘right’ present for everyone has become harder, if not impossible as we lead busy lives. I’ve retreated as much as possible to the quieter internet shopping realms where the postman plays Santa for me.

But the magic is coming back to our house once more!  My son is the first of the next generation in my family.  He’s still a little young to follow the intricacies of Santa, but snowmen and presents feature greatly in his conversations this month.  His face lights up as the preparations officially begin.  It’s all brand new for him, he’s seen none of this before.   All the fancy lights and baubles are amazing sights to behold.   He carefully places the wrapped presents under our tree, aware that something big and wonderful this way comes.  This year he’ll enjoy exchanging gifts, seeing family, eating well and having fun.  Next year he’ll buy into more of that Christmas magic, and start building his own Christmas memories that he’ll hold dear. To everyone’s delight, we’ve come full circle and once more there are going to be three generations eating a turkey dinner at my parent’s house every year.  Merry Christmas everyone! 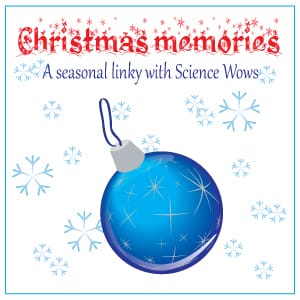