A few people have asked recently about how I got the Rascal using a potty so early. The short answer is ‘Elimination Communication’. This is our journey with it so far…

All the endless lists of ‘why breast is best’ miss out on one of the best reasons ever to breastfeed. The poop! No, seriously! As I struggled through the early months of parenthood, I was oblivious to how easy we were having it when it came to changing nappies. While newborn poop is all ultimately disgusting, there are whole different levels of disgusting to discover. Usually when your little one is covered from head to toe after a poopsplosion. If you’re a parent then you know exactly what a poopsplosion is! But you don’t realise how great the breastfed baby poop is, until they’re no longer exclusively breastfed. It was only when the odd bottle of formula was introduced that we’d get an inkling of how bad things could be. It was going to get a whole lot worse though. While the Rascal was still exclusively breastfed, we visited friends who were just starting to toilet train their 3 year old. Both boys happened to fill their nappies around the same time, so there was a queue for the changing table. My husband eventually emerged looking severely traumatised. He was shocked and horrified by what he referred to as ‘the burning smell’ lingering in the room. “Ah, that’s solids for you”, he was told, “all ahead of you!” And it really was. Luckily for us, we’re having an easier time of it than most due to practising the strange sounding art of ‘elimination communication’, or EC. 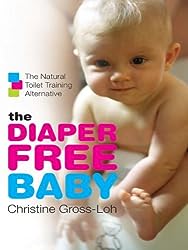 During my pregnancy months I found myself severely overloaded with information that I might, or might not actually need when baby arrived. An online search on one topic would turn into a wild goose chase off into others I hadn’t heard of before. I’m not sure exactly how I stumbled upon an article about ‘Elimination Communication’, but I found the idea interesting, and somehow the only parenting book I actually read most of before the end of my pregnancy was ‘The Diaper Free Baby’ by Christine Gross-Loh. Overall, I wasn’t crazy about the book. I didn’t like the style. It was very american, infested with real life anecdotes and recommendations from parents who’d done elimination communication. Too much time was spent trying to convince you of the merits of EC. I was more than capable of making up my own mind about whether to do it or not. However, the book did provide plenty of information I might need to start EC at any age. There were also recommendations on what kind of kit I might want to purchase. In the end I ordered a BABYBJÖRN Potty Chair

potty with a large base, back support and removable bowl from Amazon. I put it with the ‘might be useful later’ pile of baby objects in the spare room.

The basic premise of EC is that newborns instinctively strive to avoid soiling their nappies. After all, who wants to sit in a wet or dirty nappy? However, in the western world we effectively train babies to sit in one until they don’t really notice the discomfort anymore. In fact we actively train them to only go in a nappy! Then a couple of years later, we suddenly decide to train them out of this behaviour, and are frustrated when they don’t comply well with the sudden change in regime. Aside from the economic cost (several nappies a day) and ecological reasons (disposable nappies filling up landfills), reducing the amount of dirty nappies we would have to deal with over the next few years was a very attractive idea. The logic made sense to me, and the idea was quite simple. A lot more simple than the name. Cue the baby with a noise when they pee or poop, and offer them opportunities to avoid going in their nappy. Chances are that when offered a choice, they will choose to use the potty or toilet. Easy peasy! I thought I might give it a go when baby arrived and see if it worked for us. 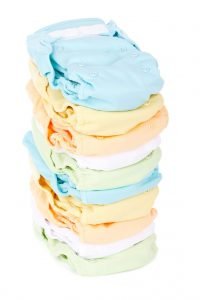 Newborn stage
When the Rascal did arrive, I had a million other more important things on my mind. As new parents we were extremely nervous of how we handled our fragile little son. Breastfeeding wasn’t an easy road to follow. The idea of trying to hold him over a bowl while feeding, or dangle him over an actual toilet periodically, wasn’t very appealing at all. We were just not that capable as parents. So I set aside the notion of doing EC and got on with the basics of nurturing a newborn. I did notice though, that he often peed (in either parent’s face) when his nappy was removed. I have no doubt that if I was more comfortable with parenting a newborn that I could have started doing a bit of EC with him early on.

Baby stage
Coming up on 5 months, I had a much sturdier baby. Although still incredibly sleep-deprived, I’d got the hang of most of the day to day routine – even if I permanently looked like I’d been dragged through a pile of nasty rubbish. I began to think about EC again. So I dusted off the potty throne, and placed it next to our nappy changing station. My husband may have thought I was finally losing the last of my marbles, but has generally been accommodating in letting me go off and try strange ideas out. He shook his head, and left me to it. Relatives implied I was insane. Using cloth nappies was one thing, but what kind of hippy toilet trains a baby? (I wasn’t, but the difference was lost on many). I’d clearly gone too far this time. Despite all the scepticism, I went ahead with an initial experiment. I knew that there are times when it’s more likely that a baby will pee. First thing in the morning or after a nap,  and about 20 minutes after a feed. So I started with first thing in the morning. If nothing else, it would get him used to sitting on a potty while he was still reasonably biddable.

As soon as I was getting up with the Rascal I would change his nappy first thing before I even dressed. When I took off his nappy I put him on the potty and supported him for a couple of minutes while making a ‘psss’ sound. Then continued with the usual nappy change. To my surprise though, I immediately got results. The Rascal was more than happy to pee as soon as he woke up. I waved bowls of pee at my husband, and was delighted. My husband was still sceptical and thought it was just a coincidence, even when he got the same result himself. I rapidly moved on to placing my son on the potty every time I was changing his nappy. It wasn’t much extra effort, and any stray pees we might catch would leave him in a fresh dry nappy for longer. The more we did this, the more obvious it was that if he had anything to produce, he was very happy to oblige with producing it on the potty when offered. Even my husband had to admit that our son was so enthusiastic that he was peeing as soon as his butt hit the potty. Before we even had a chance to cue. In fact he often caught us out by being too eager. He was definitely choosing to wait for the potty if it was available to him.

Crawler stage
We continued on doing EC part-time. Some days most pees went in the potty. Other days we were busy and didn’t even try. He even produced poops in the potty on occasion As he became more mobile, it got a bit more difficult. I also realised that we’d started just in time. Once babies can crawl, you’ve really lost the easier opportunity to start as they’re not willing to stay still on some strange new object. The function of the potty was already understood for us at this stage. Checking if he had anything was a quick process, a few seconds later he was free to go back to exploring. He was happy with that arrangement.

Wobbler stage
Once we introduced solids, we were really seeing huge benefits to doing EC. Sweet jesus, the vileness of what was being produced every couple of days! A digestive system that’s just learning how to deal with solid matter produces stenches that you can’t imagine. At this point there’s a ‘poop dance’ that generally precedes the event along with some agitation. Pooping is apparently not fun at this age! If the Rascal was placed on a potty before ‘poop face’ began, then we had a much reduced clean up job to deal with. Pooping was quite traumatic for him, but at least the aftermath was just a quick wipe.

Toddler stage
Once he could walk and was starting to assert his independence, I got a toilet seat reducer. There are a lot of tantrums at this age over the slightest thing. He generally prefers using the toilet over the potty now. The added bonus of flushing and waving goodbye to whatever he just did makes it more fun!  Pees are still hit and miss. The vast majority of poops go straight in the toilet though. As this has been the norm for us all along, it actually seems insane that most people face scrubbing such foul stuff from every crevice of their baby on a daily basis for another couple of years. Nappy changes are a big enough battle without making them into all out war.

The future
We’re just gone past 14 months old and plan to continue as things are with EC. We’ve been using baby sign, and are starting to make progress with using the potty sign. We’re delighted to oblige with a visit to the toilet whenever we’re given the potty sign, or see another poop dance starting. When summer finally arrives we might be ready to go nappy free. Or not. There’s no rush. We’ve done well with a part-time, no pressure, no big deal approach. Ultimately EC is completely baby led. Then it’s down to having the time to practice. It’s been a big success for us so far. Around 5 months was a perfect time for us to start. Every single poop in the toilet is a big win. We might have crossed the line into hippy territory, but there’s a lot less **** to clean on this side!

Previously I posted the exact steps I used when doing EC with our son, starting at an age when he could sit with support.  I don’t think a book is really necessary for doing EC if you use online resources to find the best approach for a baby at a particular age.