Fox Glacier: Every day is a winding road

Seven in the morning found us standing at the bus stop in Nelson, waiting to start our longest coach trip yet. Overhead, the rain clouds had vanished and it was clear there was good weather in store. From 7.30am to 5pm we were heading down the west coast of New Zealand’s South Island. Our trusty vehicle for the trip was an atomic shuttle of indeterminate age and definite poor engine shape. It was being driven by a taciturn guy, whose greasy dreadlocks only emphasised the growing bald patch on the back of his head. Jamming a cap on his head for the morning resulted in the ‘dragged through a bush backwards, now I have a birds nest in my hair’ effect. Despite his less than professional appearance, he somehow managed to coax the engine into staying alive at the cost of the suspension on the long, winding, steep, mountainous roads along the coast. It’s not a drive I’d like to be doing myself – especially at that speed, and in the condition this coach was in.

There’s something about these long coach journeys that triggers a strong hibernation impulse in your body. Within minutes of the engine starting up, all I wanted to do was doze off – even though I’d just got out of bed after a full night of sleep. The bone-jarring rattling as the coach went along the roads ensured that wasn’t going to be much of an option. To reduce the feeling of sleep deprivation torture for the day, it was necessary to keep our brains reasonably alert but also avoid the motion sickness that comes with trying to read. So we turned to our ipods and PSPs to keep us entertained when the scenery wasn’t enough. Brodie has become addicted in the worst way to Weeds in the last week. I brought the first four seasons with me. He could well be finished them in just over a week at this rate. Between that, In Treatment and re-watching Lost episodes I’m keeping myself well-occupied also. 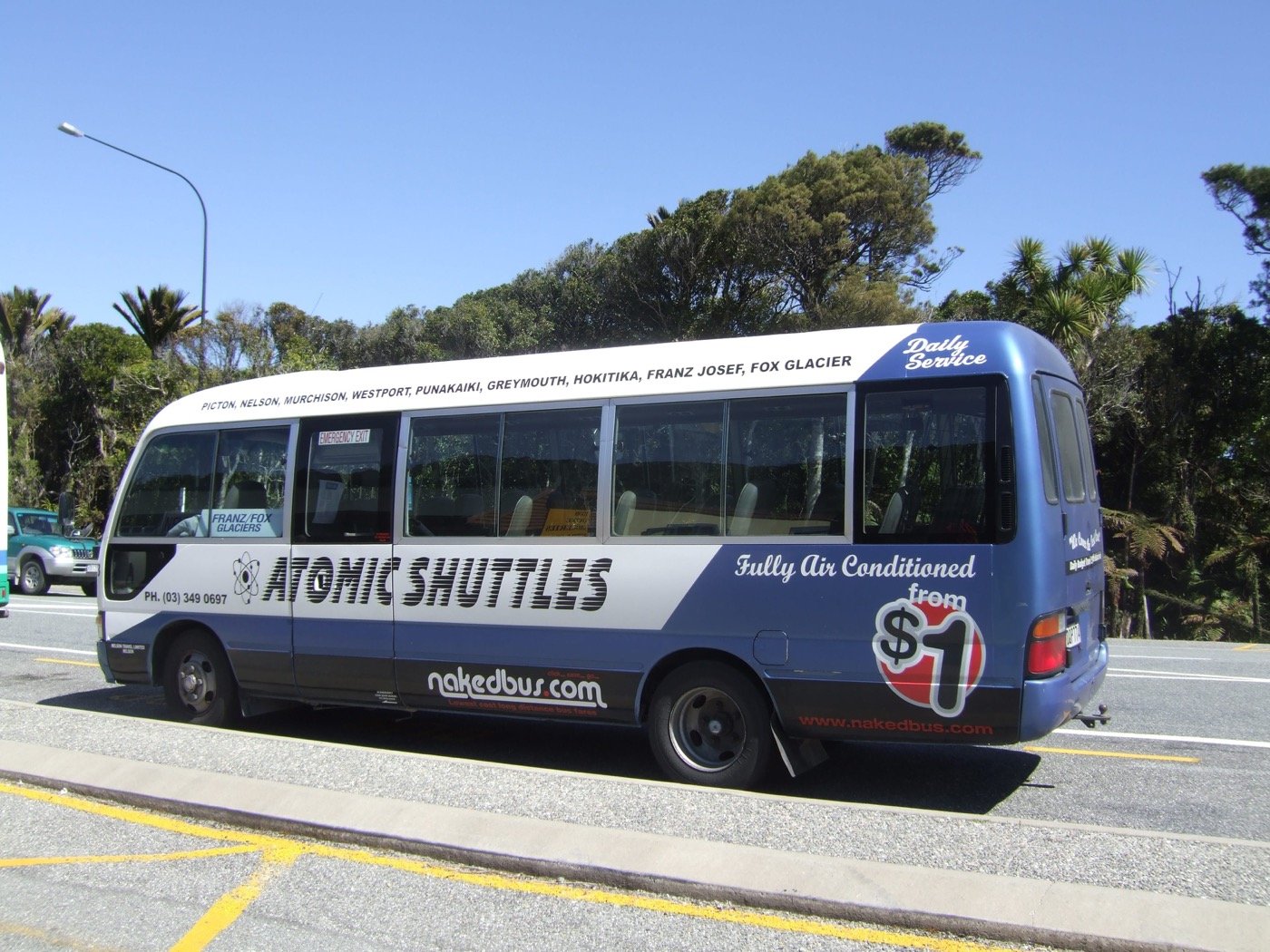 The day passed slowly between playing PSP games, watching tv episodes or just listening to music as the bus crawled up mountainous terrain and skidded down towards wind-swept bays that all went by in a blur of sunshine and colour. There are a lot of beautiful areas where it would be tempting to spend a couple of days if you were on a self-drive holiday. For us, the bus stopped briefly at a couple of cafes in the middle of nowhere to allow for snacks and the chance to stretch our legs.

After a while, most of the towns start to look the same. There’ll be the obligatory I-Site (tourist information centre) and nearby coffee shop to relieve the bus passengers of currency in exchange for caffeine and sugar. Close by there’ll be crowds of teenagers hanging around with apparently nowhere better to be. They display a strong inclination to scream across wide spaces at each other, instead of moving their asses until they’re in closer proximity for talking. Skinny jeans and skateboards are apparently still the height of teenage fashion here. These teenagers also practise the uncanny Kiwi ability of feeling nothing in their feet. Perhaps genetics have led to feet virtually numb of feeling, as regardless of how cold it is, there are people constantly running around barefoot on surfaces that look like shards of glass. It’s a super-human ability like walking through fire pits that allows them to run barefoot across ice cold pavements and doesn’t fade as they grow older. Finally, we reached Franz Joseph village where everyone else got off the bus, lightening the load just enough that the bus could make it up the bumpy tracks as we continued on to the smaller, quieter and quainter Fox Glacier. Scanning the mountains as we climbed higher with the growing feeling that I was in a modern-day version of the Emperor’s New Clothes, I had to resist the urge to grab a local and demand proof that there really were any glaciers. Having seen the behemoth glaciers in Iceland last year, these ones were but small fry in comparison and definitely not easily seen from great distances. The advantage these smaller glaciers do offer is much easier access.

Spring is well on its way in the mountains and the hotels and lodges in Fox Glacier were carpeted in scented flowers. There are four or five cafes/restaurant/bars varying their opening hours to suit the number of tourists around at the moment. It would be a nice place to spend a very quiet few days at this time of year. Unsurprisingly, the main activities revolve around the glaciers nearby and trips to Wanaka where we were headed to the next morning.