The group congregates once more for breakfast once it’s light outside. At some point during the cereal and coffee, Mrs Holland returns from an excursion around the barriers and reports success in locating some dingos. In typical tourist fashion, there’s a mass exodus to gather cameras and stampede over to the far fence where a young dingo pup casually sits beside a tree wondering what all the fuss is about. People move closer and camera lenses whir, zooming in for those close-up shots. A couple of older dingos appear, cautiously sniffing the air for any evidence of food. Disappointed not to find a trace, they rapidly lose interest in the crowd of gawkers and go back to foraging for food. The general consensus seems to be that while these creatures do look quite like dogs, there’s a sense of something more dangerous about them… the frame of their bodies and their movement is reminiscent of a hyena on the prowl.  We’ll be happy to keep our distance from them. With bootcamp precision the bus is loaded up and Neil is stalking around preparing to berate any would-be stragglers. At 7.30am we settle back into our seats and prepare ourselves to be shaken, not stirred for a second day. Happily, the majority of our time is to be spent driving along the beach. Still far from a smooth ride, but in comparison to the nausea of yesterdays insane pace along the inland tracks, this is a bit more manageable. It’s also quite repetitive as we chug along soft sand, then race along swathes of wet sand. To the left the sandy dunes, to the right blue ocean waves continuously foaming and hammering the shore on a hypnotic endless repeat. Ahead and behind us the beach stretches out into the distance with no end in sight. No prizes for guessing where the name 70 mile beach comes from. If it weren’t for the juddering at each soft patch of sand the view would be perfect for some serious contemplation and meditation.

Dotted along the beach are the camper vans and jeeps. There are a large number of fishers wading along the water in search of fresh bait, or slinging their line into the sea. Merrily, Neil points out any jeeps he spots that appear to have gotten themselves bogged down in sand. I consider the cosmic justice if we were to get bogged down also, and fervently hope that we’re not going to end up frantically digging before the end of the day. After Neil mentions that this coastline is popular with whales, there are frequents halts during our drive when one of the avid whale spotters sees a plume of water anywhere in the ocean. The vehicle comes to a stop and all eyes scan the water hoping to catch a glimpse of whatever’s out there. It’s usually a fruitless endeavour as there’s little out on the water to help direct you to the right spot. On one occasion there are enough plumes of water from blowholes for most people to lock on to the correct location just in time to see the dark shape of a beast leap into the air for a brief second. 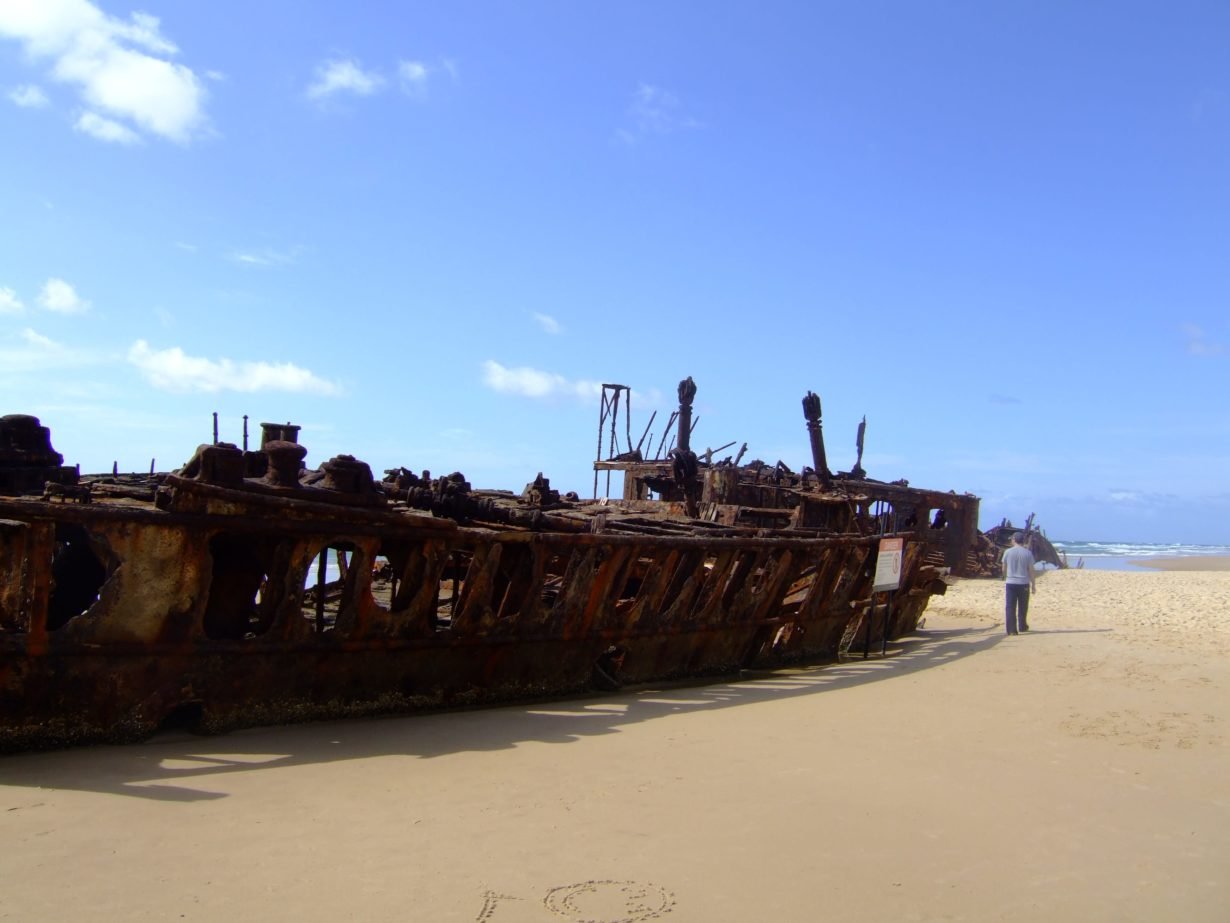 About halfway up the beach, our first stop of the day is the Maheno shipwreck. This ship served both business and military during its working life before getting wrecked on the coast of Fraser Island. Ironically this happened during stormy weather when it was being towed to a salvage yard. Most of its 5 or 6 decks are now buried far beneath the sand. We get an idea of how that might have happened when Neil mentions that the military were fond of using the wreck as target practice. It’s more disturbing to hear that for years after the war unexploded bombs were being found upto 5 km away from the wreck. Nice aiming fellas. We circle the boat and peer through rusted portholes into the guts of the ship where red metal twists its way up out of the sand. It’s somewhat eerie to see the exposed skeleton of such a big ship being worn away by the elements. A graveyard for a single lonely vessel on a pristine beach, seagulls circling in the clear blue skies like vultures.

From there it’s full steam ahead all the way to the top of the beach to visit the Indian Heads. We climb our way up to the top of the rocky outcrop for stunning views of the coast around us. You can just about see the curvature of the earth from this height. On one side the 70 mile beach reaches off into oblivion, on the other a smaller, more desolate beach continues on in the other direction. It’s the perfect spot for capturing the sun, sea, sky and beach on film. People stand in small groups squinting out towards the horizon trying to memorise every detail of what’s spread out before them. 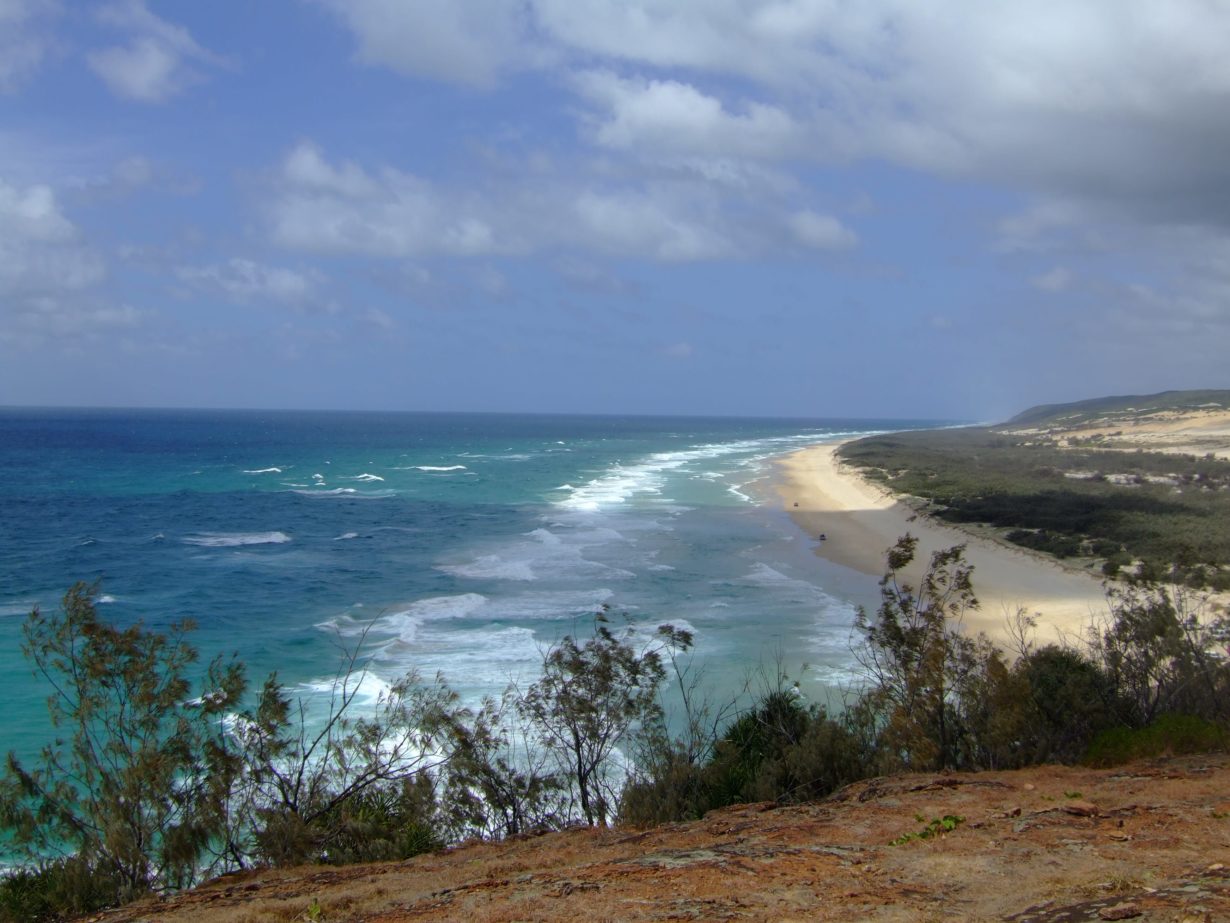 On our return journey we visit Pinnacle Rocks to see the coloured sands. Sandy cliffs sliced open by weathering and erosion to expose slabs of different colour rock – just like a slice of layered cake.  Our final stop of the tour is Eli Creek. Another freshwater creek that’s popular for overheated tourists to take a dip. We’re too lazy to put back on our wet swimming clothes from the day before just so we can go up the boardwalk and float back down the creek. However we decide to wade up the creek and find that it’s possible to get the whole way up and back without submerging past your thighs. That is unless you lose your concentration and make a bad call in where you’re stepping. Carefully edging our way along and moving back and forth to follow the shallower sand banks, we make it up the picturesque route with the camera still bone dry.

We’re just back on the bus on our way down the beach to one of Neil’s picnic spots when karma strikes with vengeance. There’s a ferocious hissing noise at the front of the vehicle and no one is reassured when Neil checks and insists that we definitely don’t have a flat. He briefly suspects the air conditioning unit, but after laboriously driving a little further he’s forced to conclude that the turbo is gone on the engine and we won’t be be getting far without fixing it. It’s time for an impromptu lunch while he flags down passing vehicles until one of his mates in a hummer jeep comes along and stops to help disassemble the engine enough to put the pipes right again. By the time lunch is over, we’re good to go again.

We eventually leave the beach to cover the last 18km on one of the unpopular inland tracks. A good rattling around as we pelt along the road leaving a storm of dust in our wake is giving Brodie more and more shoulder pains. By the time we’re skidding our way back down to the ferry at Hook Point, he’s hunched over and really wants to get off this particular roller coaster ride. We get a brief pit stop while the Rainbow Beach inhabitants are dropped off. I’m roaming the aisles of the shop evaluating the range of painkillers when Jackie, one of the Canadian ladies, comes racing in on a mission to get contact details because she just has to see that photo I have of our dog sleeping with my big headphones on at Halloween. Yes, our dog is just that cute.

I pour a bunch of painkillers and icecream into Brodie. The remainder of the group can’t resist the sight of our icecream and pass by to get their own sombrely, as if at the scene of a horrific road accident where someone is dying. Watching Brodie slouched over and getting non-stop back rubs for the last few hours they seem convinced he must be afflicted with some kind of mortal ailment that might possibly be catching. Back on the coach I start getting offers of random medication and have to explain that he’s got enough drugs for now, thanks. Halfway back to Hervey Bay the drugs finally kick in and Brodie is upright again when the bus pulls up to let us off back at the Aussie Woolshed.

We check back in, getting an upgraded room with extra space that feels like a real jungle hut with its long sloping ceiling and vents all round letting in the cool night air. We ramble down to the beach in the hopes of another rosy sunset, but that’s not to be. Instead we stuff our faces in the Fat Dog Cafe which specialises in foods with a strong Japanese influence and retire early, pretty much passing out on the bed immediately. Great as the Fraser Island tour has been, after two days of being shaken around, we’re feeling like we’ve been in the ring for a few rounds with Mike Tyson and didn’t do so well.