All international flights to Hawaii fly into Honolulu on Oahu, which is the most developed island. There are 8 main islands in the state of Hawaii, and locals refer to the island Hawaii, which is the largest, as ‘the Big Island’ to differentiate. All of the islands have their own attractions, but we chose to focus on the Big Island. After an overnight stay beside the airport, we caught an inter-island flight with Mokulele airlines to Hilo where we spent most of our time. This is less built up than Oahu and life moves at a slower pace. In typical Hawaiian laid-back fashion, we only boarded the plane about 5 minutes before we were supposed to take off. Most of the crew appeared to have wandered off for breakfast. Possibly aware that with only 11 passengers including us, it really didn’t take long to get into the air anyway.

After a bird’s eye view travelling over a few other islands, the plane landed 35 minutes later in Hilo. The 6 checked bags were rapidly unloaded, and we picked up our shiny red rental car. It was a short drive into Hilo town where we’re staying in the Hilo Bay Hostel. This hostel is all on one floor above a shop. The entrance leads into the centre of the building with a large open lobby containing seating, PCs and a rather loud parakeet that likes to wolf whistle as people pass. The rooms all lead onto this lounge area giving a homey feel. As the hostel wasn’t full, our room was changed to one with two windows and an extra 2 bunk beds that served quite well as space to dump all our luggage. 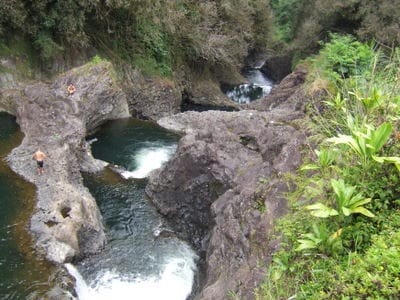 We’re slap bang in the middle of Hilo town so there’s plenty to see and do if we can just get over any lingering jet lag and the side effects of the much increased humidity. I can barely imagine being able to breathe here if it were the middle of summer. The first day saw us heading out to the Rainbow Falls and Boiling Pots. This gave us an immediate taste of what can be found on Hawaii. It’s like stepping into the middle of the jungle even though civilisation is still close by. In a patch of forest reminiscent of some scenes in Lost (which is actually filmed on Oahu), you can get up close and personal with the long vines and test how far you can climb with their assistance. 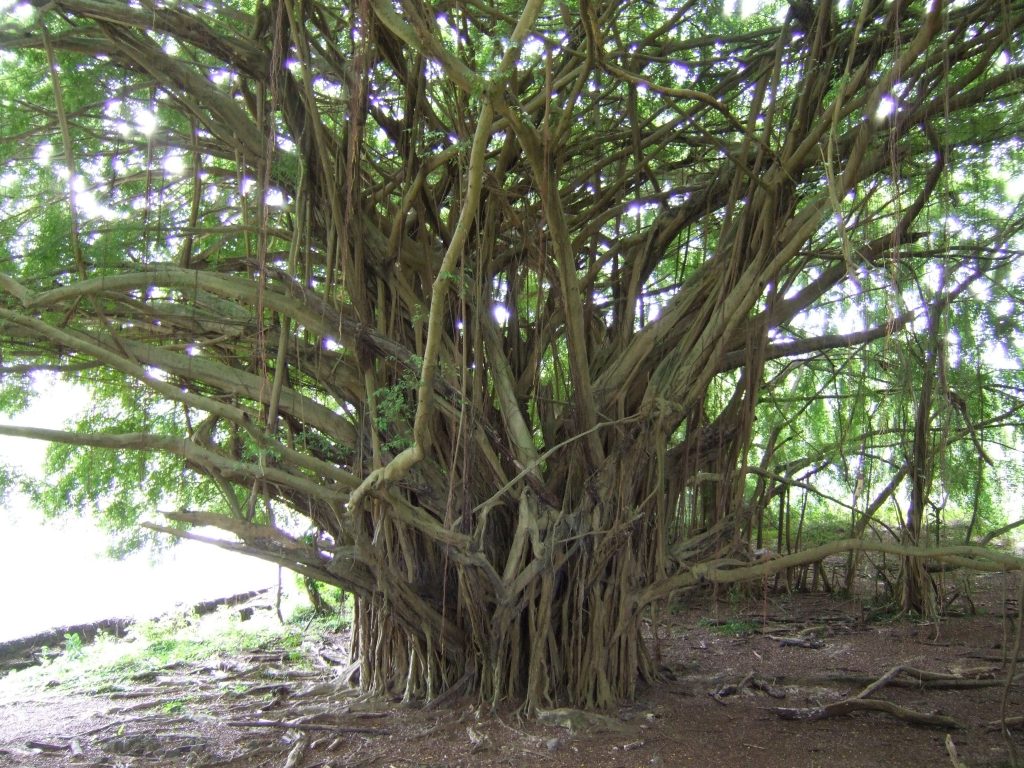 Darkness falls fast around 6.30pm, and there are a fairly limited selection of restaurants and shops that stay open late. A sign that it’s not the high season, and not a great location if you’re looking to party all night. Despite Hawaii’s reputation for being a very expensive place to stay, food and accommodation can be quite reasonable if you’re not staying in the expensive resort hotels. There’s lots of parking available around Hilo – the locals paying little attention to the signs that you’re only supposed to stay in a spot for 2 hours at a time. We plan to spend most of our days outside of Hilo exploring the rest of the island though.