Hawaii is quite a big island with far too much to do and see. With the Volcano Park easily taking up at least a day, we weren’t left with much time for the rest of the island! After an early breakfast spent trying to avoid Elmo (a rather odd hostel resident who’s always lurking around somewhere, and sounds exactly like Elmo off Sesame Street), we hit the road to see how much we could cover. Hawaii is very dependent on both tourism and the US military. This is quite evident with all the expensive hotels around the coast and as you start crossing the countryside, military bases pop up in unexpected places to take advantage of the hugely varied terrain.

Leaving Hilo, we flew up the east coast on Highway 19 (the main route circling the island) and headed north until we reached the Waipio Valley scenic lookout point. This shows you a large and beautiful valley stretching between mountains and leading out to the sea. Visitors can hike down as far as the black sand beach, but most of the valley is private access only. From the lookout point there’s a great view of the valley that’s worth stopping off to see. 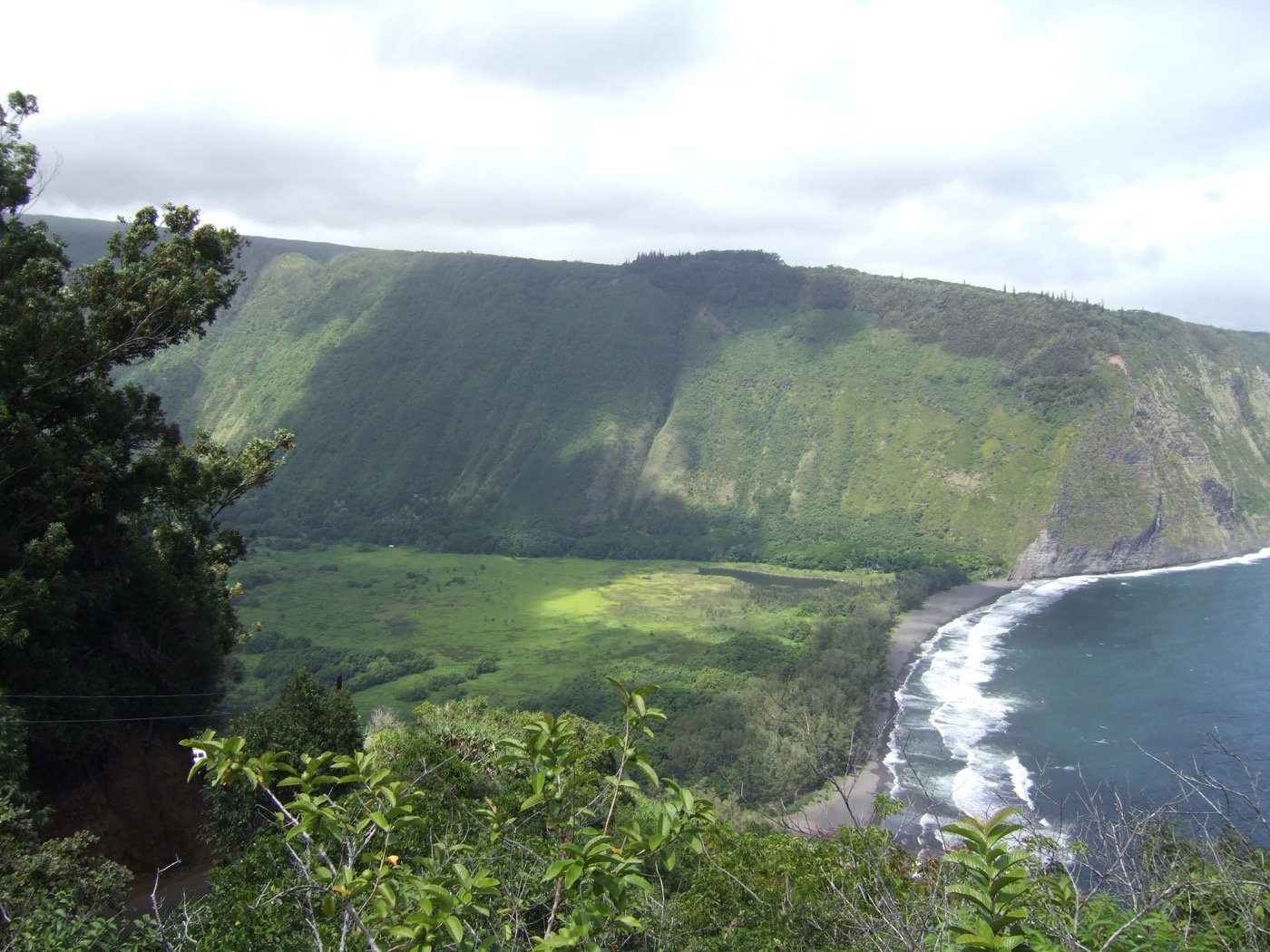 Continuing on, we turned west and then north again to drive through the mountains up to Kohala at the top of the island. The landscape of Hawaii changes rapidly – this steep road up to the heights gave spectacular views across the island and also took us through wide rolling plains containing ranch after ranch. True cowboy territory. When we finally descended to Kohala, we stopped for bagels, coffee, icecream and a box of fudge from Kohala Coffee Mill. Suitably stocked up with lots of sugar, we took the coast road back down the east coast, stopping for a rest at a sheltered park beach which was sweltering hot. We finally reached Hapuna beach which is touted as being one of the best beaches on the island (that match visitor notions of Hawaiian beaches).

It certainly didn’t disappoint these visitors. It’s a small stretch of beach, the southern end being a public beach, and the northern end is Mauna Kea, overlooked by the expensive Mauna Kea hotel. The water was too inviting to resist, so we applied liberal doses of suncream and swam in the shallower waters before reading in a picnic area while we dried off. The perfect way to refresh yourself on a hot Hawaiian day. This would be a good part of the island to stay on if your top priority was lying out on a sunny beach all day. 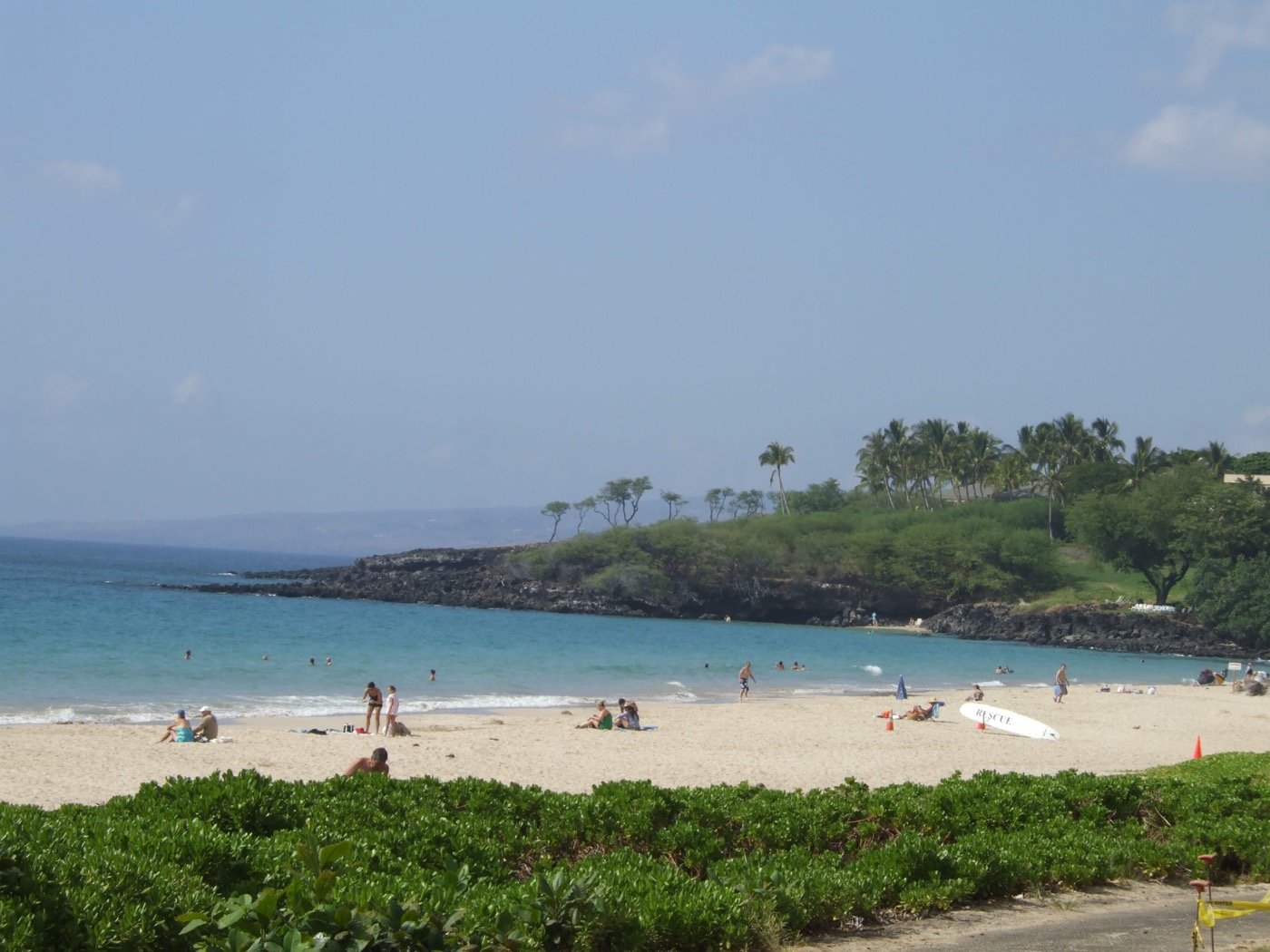 From this point on, the end of the day was drawing closer and it was a race to see how far we would get before darkness fell. This left us finishing the island circle in the dark while the roads dipped and rose at unexpected times. An experience in its own right as oncoming traffic that seemed to be just in front of us could actually be far away on the top of the other slope leading into a valley  Then other traffic would magically appear out of a hidden dip in the road. We stopped at Volcano town again for some dinner before driving the last stretch back into Hilo. Ideally, with about a week to spend on the island you could spread the sightseeing out with accommodation in Volcano, Hilo and Kona – but our flight back to Honolulu was due to leave the next day so it all had to be done in one go or not at all. We left just a little to cover on our last morning.