It’s been a busy month for us with all the house moving and redecorating, but we try and spend some days getting out and about in the (sometimes) sunny summer weather. Recently we were lucky to choose a pleasant day for a trip out to Ireland’s Eye. We had signed up to head over for the morning with a lovely bunch of folk who raise their kids ‘free range‘ style. This means taking any opportunity to get outdoors and let the kids roam freely in natural surroundings with minimal supervision based on their age and abilities. It’s an idea I love, but don’t manage to put into practice as much as I’d like. This particular excursion was an easier journey to make now that we’re based on the north side of Dublin. We put our names down and hoped that the capricious weather we’ve been having this year wouldn’t cause us problems on the day. Ireland’s Eye is a small uninhabited island just north of Howth harbour, which itself is a nice coastal town to visit. I’ve been to Ireland’s Eye once before with a group from college, so I knew there were mostly rocks and birds, (and bird shit here, there, and everywhere). An ideal location for children to explore the wild outdoors, though this would suit slightly older children better than mine. The ground isn’t level, and the island is big enough that you won’t get too far with a dawdling toddler. But throw in a boat ride, and there was no doubt that the Rascal would enjoy the day out at his own pace. It was a big bonus that the day dawned bright with white clouds scudding across a blue sky. We took the boat trip over with Ireland’s Eye Ferries who have boats going back and forth regularly most days at a very reasonable rate. I paid €15 for the two of us. The Rascal was very excited at the prospect of catching a boat out to an island. He’d been talking about it all the way over in the car. He was somewhat less enthusiastic about being expected to don an over-sized lifejacket that was almost as tall as he was. Still, he suffered through the indignity and soon was busy taking in the sights as the boat headed over the waves to the island. It’s a short trip. About twenty minutes later we were gingerly disembarking and waving goodbye as the boat took off back to Howth to collect more visitors. And there we were. Just a bunch of parents and kids, and a whole island (almost) to ourselves. The kids took off in all directions, as they do. There’s the big round stone Martello tower to climb, with the entrance window only accessible via a rope. A large hill beckons from the centre of the island. We didn’t make it as far as the ruins of a monastery on the far side. There were numerous pebbly beaches to explore, or take a chilly dip in should you be that way inclined (and most children are!). After clambering about on rocks and bird shit for a while, the Rascal was intent on collecting pebbles on the nearest beach. This occupied him for quite a while before the siren call of our picnic basket became too strong to ignore. 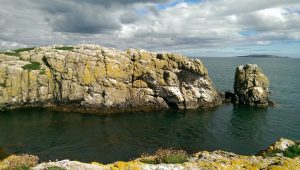 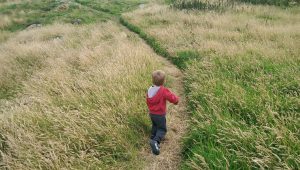 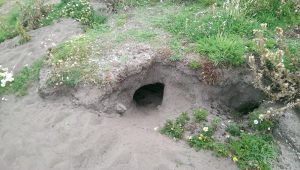 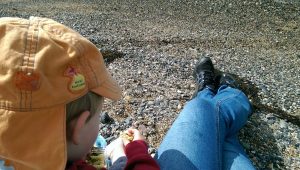 By now we were the only people left on this beach. We sat on a blanket eating pasta salads and yoghurt with crackers and cheese. Served with a dash of salty sea air and gritty sand. It was a peaceful moment. Just the two of us all alone, but surrounded by activity. We sat quietly in our small bubble of calmness just eating and observing as life went on all around us. Flocks of birds squawked as they strutted about on the rocks. Massive seagulls swooped across the water in search of food, crying to each other on the winds. Higher overhead, airplanes regularly trailed white patterns across the sky on their way to and from the airport. Boats busily chugged past, the smell of petrol wafting in on the breeze. Waves gently rolled onto the dark sand and stones before us, edging up close, then timidly pulling away again at the last second. 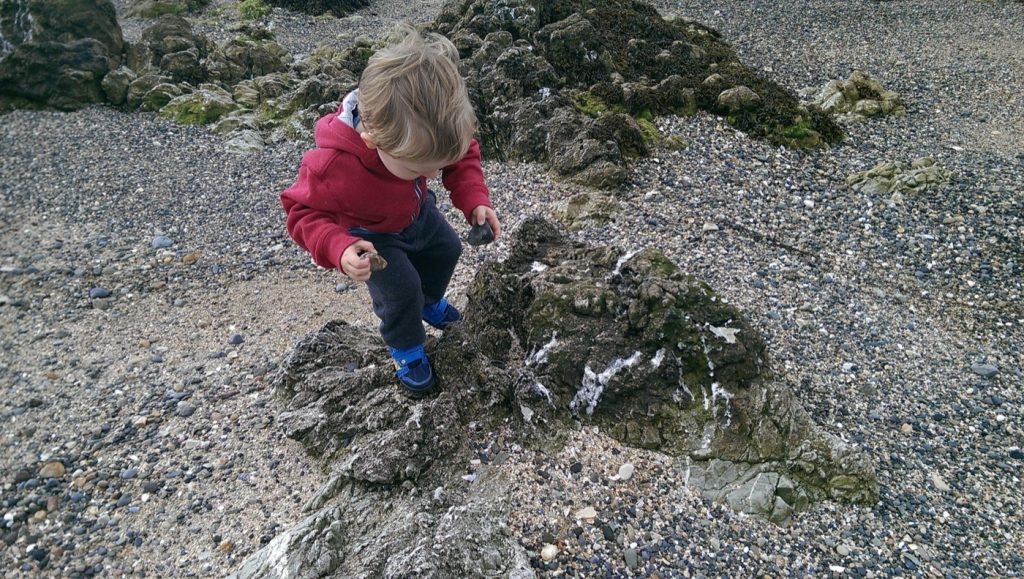 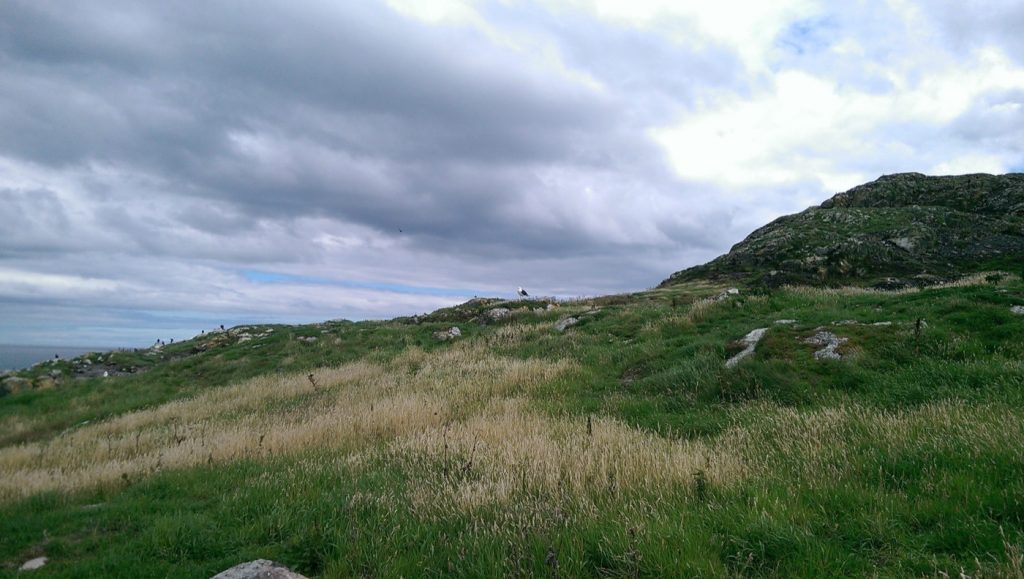 We ate, we listened, we saw. And when we were done, we packed our bags back up and went to explore some more. We made it partway up the hill before returning back to set up a permanent base by numerous holes that had been burrowed into sandy ridges. The Rascal began an earnest digging campaign with another random toddler while the adults debated the creatures that might have made the holes. Surely too big for rabbits – badgers perhaps? The toddlers did their best to stick their heads down far enough to find out, but were unsuccessful in determining the identity of the inhabitants. Now it was apparently time to get wet in the water. Having struggled to pack for both sun and rain without having carrying several bags by myself, I had neglected to bring along wellies which ultimately proved to be the best choice of footwear for a the pebble beach as the afternoon turned chilly. By now though, it seemed to be fast approaching tantrum-o’clock. I bundled up my cantankerous toddler and we cautiously made our way to the far side of the island to catch a return boat. Access down to this landing point was less hospitable to those carrying overflowing bags and squirming toddlers, but soon we were heading back towards the mainland with wind in our hair and smiles on our faces. I suspect we will be back to Ireland’s Eye again soon. If you’re looking for a day trip that’s a little different, then a visit to this remote (but easy to get to) island off the Dublin coast will tick a lot of boxes.