Myself and the Rascal shared a small hotel sofa-bed for our first night in Lisbon.  It was not a comfortable sleep-filled night.  The thought that this was deemed a suitable bed for children was disturbing.  Our dog wouldn’t have settled for the lumps and metallic bumps we endured.  We were supposedly staying in a five star hotel (courtesy of the husband’s work plus a hefty supplement for bringing the family with him).  We’d been relocated to a ‘suite’ next door which was great because it meant a bedroom, sitting room, bathroom and kitchen for the Rascal to roam about.  The accommodation was fine (aside from the pull-out bed), but we were at a loss as to how this could possibly be rated 5 stars by anyone.  They left us dainty cups, spoons, a teapot and empty sugar bowl.  Sadly an electric kettle wasn’t included.  Just a possessed pot that rattled angrily any time we heated up some water on the hob for a thimbleful of tea.  We weren’t the only ones on the work trip who weren’t impressed with the quality of food and service, but given that we weren’t paying full whack to stay there, it wasn’t too bad.  A takeout cup from Starbucks solved the mini-teacup issue. After breakfast I diligently set forth to conquer the hills and sights of Lisbon with the Rascal.  Our humble ambition was merely to get a taste of life on the streets. The mechanics of bringing a toddler plus all the necessary accoutrements were problematic though.  In the end I decided to risk packing light without a sling based on the Rascal’s preference for walking everywhere anyway.  We breezed on down to the nearest Metro station and obtained a day ticket.  I hoped to avoid the worst of the hills and use public transport as much as possible whilst getting orientated in the city.  We hopped a couple of stations down the line and emerged in search of the tramline heading west to Belém.  This is a popular tourist destination according to TripAdvisor and is supposed to be a nice scenic ride on the tram.  Given the Rascal’s fixation with any mechanical vehicle, excitement was high.  Our first disappointment was the extremely modern tram that swept up to the station.  Not quite the quaint ride we were expecting.  It was jam-packed.  Thankfully you’re never left standing on public transport in Lisbon if you have a child in tow.  But there was little chance to admire the scenery with bags and bums wobbling in our faces the whole way.

Twenty minutes later we disembarked to find a wet, cold, misty day.  Belém looked like a lovely area with parks and playground, but today was not really outdoors weather.  We took a quick look at the seafront, then the Rascal was entranced by the fountain sprays at Praça do Império as they waxed and waned before his eyes. Many a tourist passing by was entertained as he danced a jig at the sight.  His exuberance lightened a dreary day a little.  Sadly we also attracted all the street hawkers who shoved umbrellas in my face and made incomprehensible commentary along the lines of what a bad mother I was not to purchase an umbrella for my wet and bedraggled son.  I lacked the appropriate Portuguese to enlighten them on the Rascal’s distinct preference for leaving his hood down and getting his hair all wet whenever possible.  He’s a toddler.  Walking in the rain is a fun pastime, don’t you know? 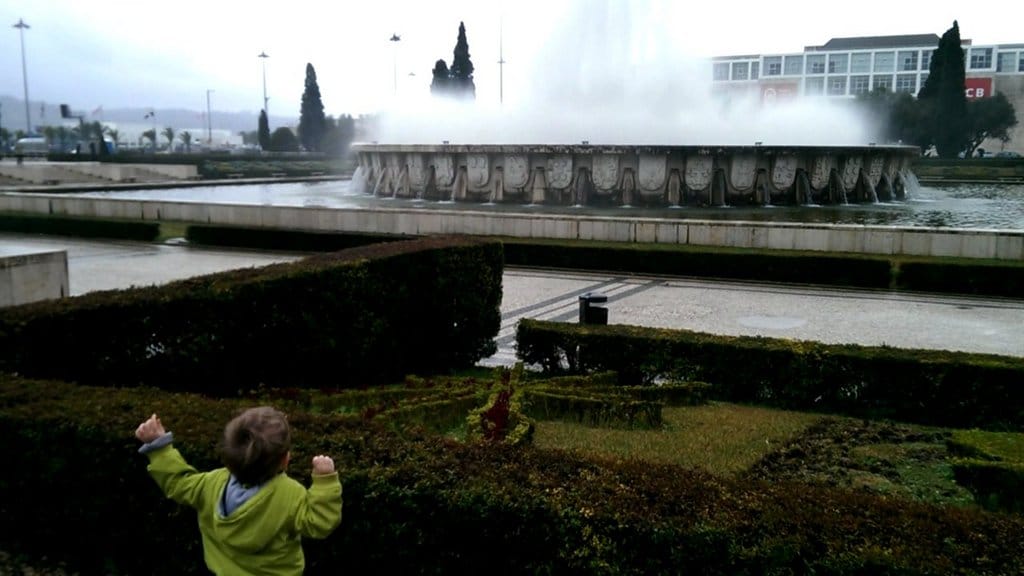 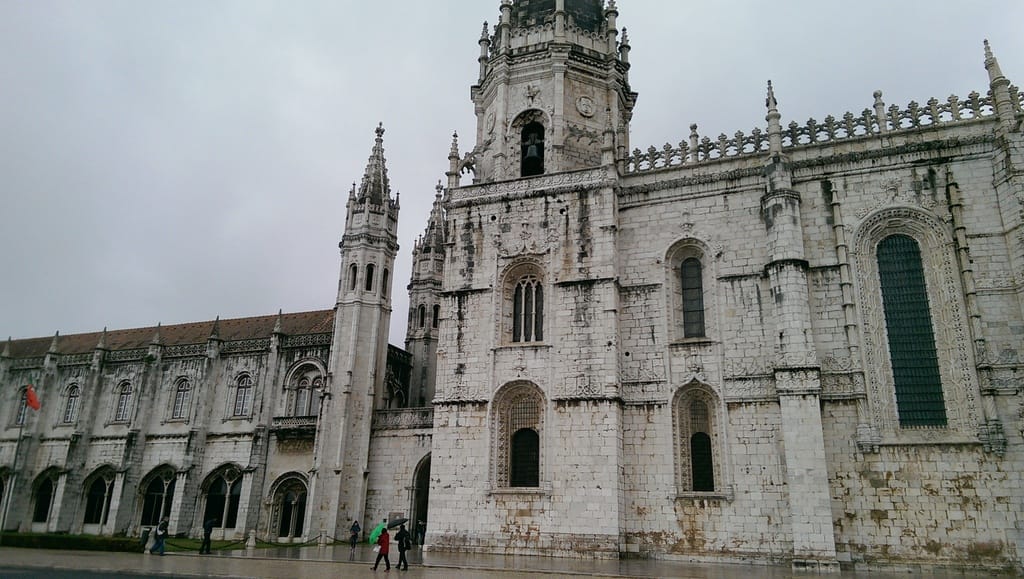 Us heathens then paid a quick visit to Mosteiro dos Jerónimos to see what all the fuss was about.  Probably the first church the Rascal has ever set foot in.  He didn’t seem overly impressed by the architecture and sculptures.  The fountain was a hard act to follow.  The plan was then to grab something to eat and head back to the hotel in time for the Rascal’s nap.  The infamous pastry shop Fábrica de Pasteis de Belém, which is famous for their pastel de Belém (egg tart), was mobbed with tourists.  Weird confectioneries were piled high behind glass counters.  I’m more of a chocoholic myself so most of it didn’t actually appeal to me.  There was some strange ticketed queuing system I couldn’t make sense of.  At least not with a toddler yapping in my ear.  We did manage to grab a table inside.  Grand I thought.  Table service.  We’ll have a quick bite of something and move on.  The surly waiter cleared debris from our table, then ignored us.  Super, we got the one un-talkative waiter in Lisbon.  If there had been a slice of decadent chocolate cake on offer we might have waited it out a bit longer, but this far far too much fuss for a stodgy pastry.  After ten minutes we gathered up our things and left for the familiar Starbucks sign down the road.  Sadly there were students falling out of the windows in there.  The Rascal started chanting about hotels and beds and naps as I debated entering.  He was now too tired to be interested in eating, so I gave up on that plan and went to wait for the tram back.

Three trams rolled past in the opposite direction before a city-bound one finally returned.  As we sat in the stuffy cabin I could see the Rascal’s eyes drooping dangerously.  Noooooo.  Way too early for nap time!  I informed him of his mistake several times to no avail.  By the time we were booted off the tram (for some reason at a different random stop to the one we got on), he was sound asleep.  Dammit.  Should have brought the sling, shouldn’t I?  I awkardly carried him to the nearest metro station.  Bzzzt! said the turnstile.  Bzzzzt.   Bzzzttt.  Bzzzt.  No matter how much I cursed at it, it wouldn’t let us through.  The queues at the ticket counter were long.  The Rascal was getting heavier by the second as I kept waiting and retrying.  Bzzzzzzzt!  It was several minutes until a helpful train employee came to our assistance just before I wilted under the weight of my burden.  I raced for the next train and we whooshed through the darkness, the Rascal’s head lolling from one side to the other.

There are an awful lot of steps back out of the underground metro stations.  Between these and the hills I was going to be getting quite a bit of exercise.  Then we were back on the Avenida da Liberdade.   I can do this, I thought, bouncing the poor Rascal from one shoulder to another.  It’s only an 80 degree incline all the way up to the hotel from here.  No bother.  Really.  I slowly sweated and puffed my way uphill.  Nearly there.  If I could just get the Rascal into a bed without him waking, I was due a serious nap myself.  Just as the hotel sign came into view the Rascal stirred and enquired as to where the tram had gone.  *%#&!  After an hour wrestling with him in the hotel bedroom I had to admit defeat.  No nap for me, a quarter nap for him.  This did not bode well for the evening.  This was the one and only day I left the hotel for the day without the sling in my bag. 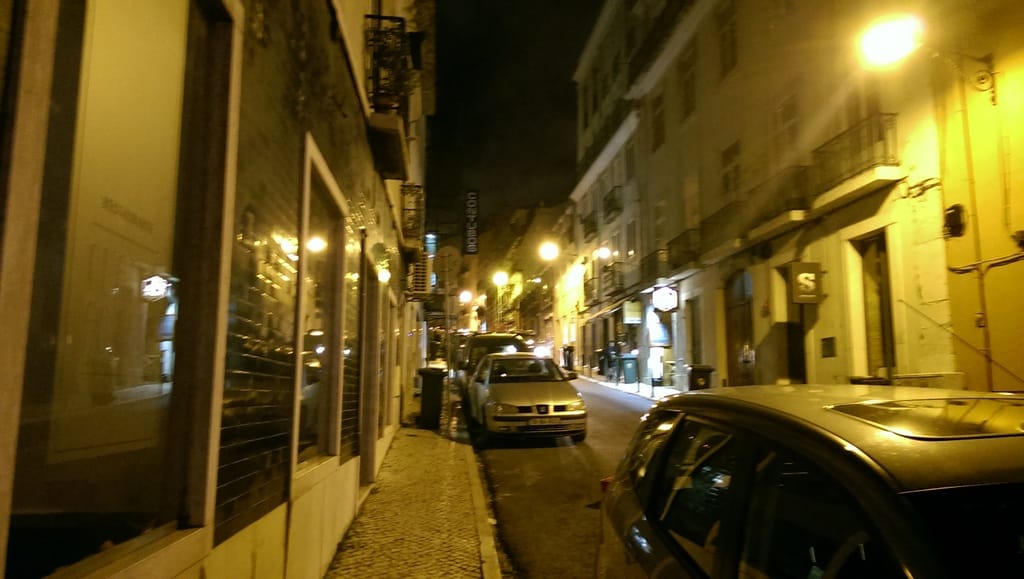 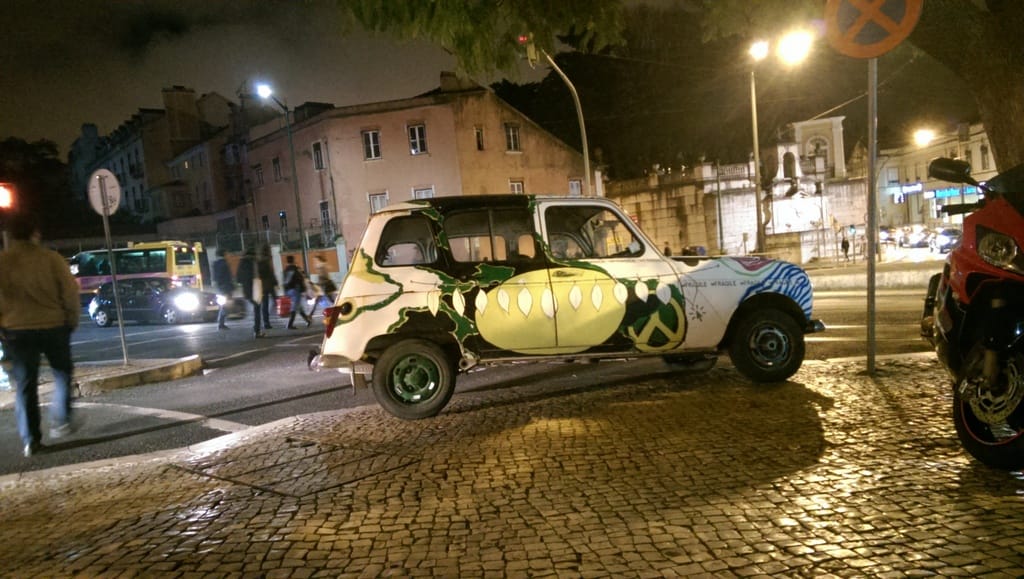 Luckily the Rascal found reserves of strength and managed to sit through an early dinner in the Hard Rock Cafe (not very local, but always open) with a couple of his father’s work colleagues.  He did not love the cheesey pasta, but picked and chose from everyone else’s plates.  We took a tour around the restaurant whilst waiting for dessert and pondered the laws of physics that allowed an upside down enormous car to dangle high about the diners without falling on their heads.  “No car fall down!”, the Rascal sternly informed all the staff he saw.  By the time we left at 8pm, his head was heavy and he was more than ready to submit to the sling for the walk back to the hotel we were currently calling home.  Daddy’s turn on the torture contraption now.  The Rascal and I stretched out on the rather more padded double bed and enjoyed a decent snooze after all our exertions.