Lisbon with a toddler 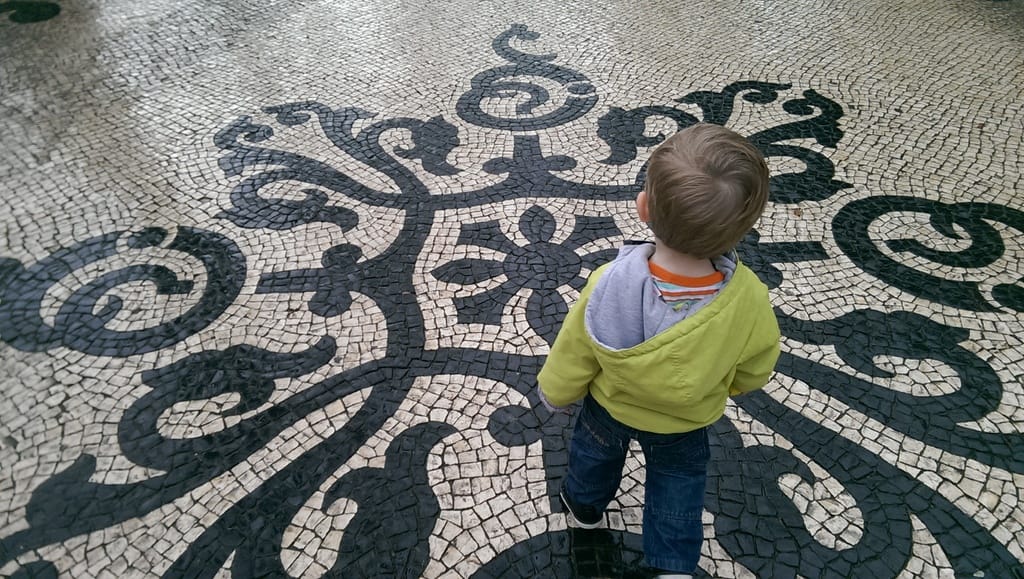 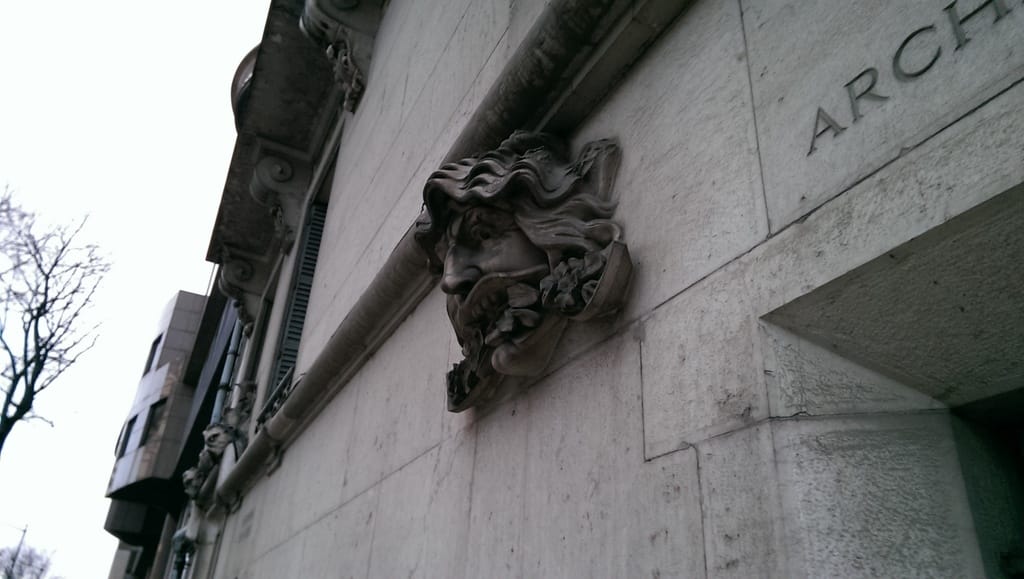 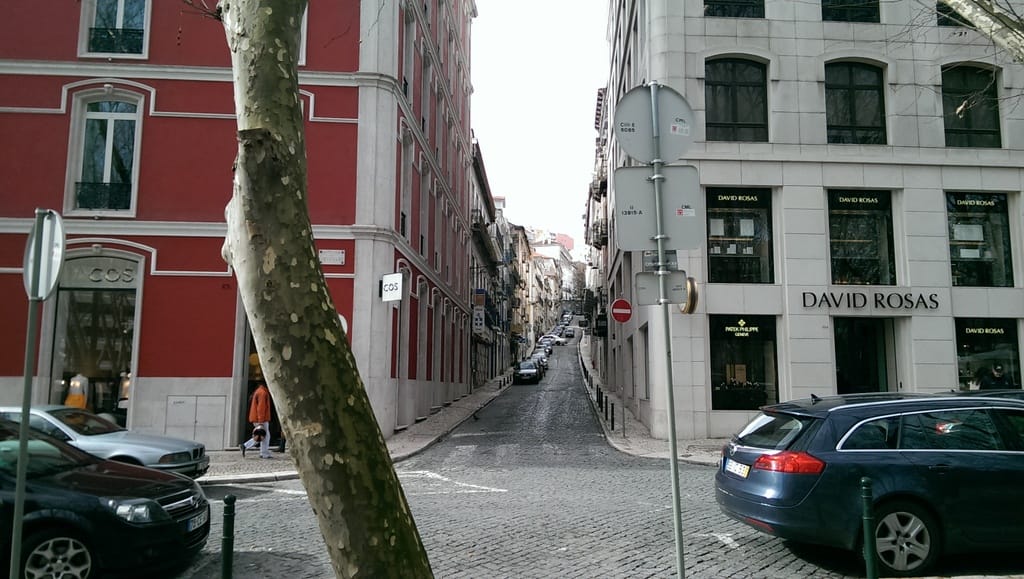 We ramble through a maze of roads and lanes that twist and turn in every direction (including up and down), passing between the colourful buildings. We gaze through windows at vast arrays of dense calorific pastries dusted in snowy powder, and try to resist being lured in again. The streets are lively, but no one’s in a rush. You can take your time, stop to admire an ornate facade. Peer down wide streets that offer a glimpse of the glittering ocean in the distance. Or up narrow lanes and endless flights of stone stairs wending their way into the hills where yet more buildings in pastel shades crowd together, basking in the weak sunlight. Some are freshly painted, others stand neglected with weather-beaten sculptures mournfully staring down at us. Cracked walls sprout colourful graffiti here and there. We trip over broken pavements, pause to admire a bright red fire hydrant or two (or three). We distractedly walk on patterned sidewalks lined with trees, heads down, admiring the splintered mosaics.  Later we gingerly slide back along them, slick with rain, wondering if our shoes will be able to find any grip on the shiny motifs. As darkness falls we’ll roam the streets in search of a cosy restaurant where we can people-watch while we fill our bellies with hearty food. This is Lisbon. 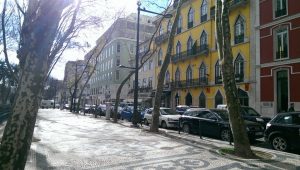 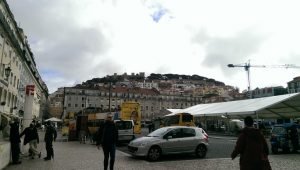 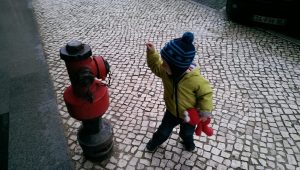 Lisbon in early February is a nice place to be. Compared to home it’s positively balmy. The temperature hovered around 12 degrees during our stay. That’s about 12 degrees warmer than Dublin – where repeated snow showers were being reported. I was quite enthusiastic about the change in climate, the Rascal was less so. For the first time ever whilst away on holidays, he constantly requested that we go home. He was tired and cranky most of the time, overwhelmed with the new environment. Particularly as we were staying in a hotel filled to the brim with staff from my husband’s company. Everywhere we went there were people popping up to say hello and chat to the little man. Small wonder that he began to assume that we must know every single stranger he encountered, whether on the street or in a restaurant. “What that?”, he would demand, pointing at yet another person he was literally objectifying. Despite his less than optimal humour, he found much to enjoy as we explored the city in toddler-sized steps. 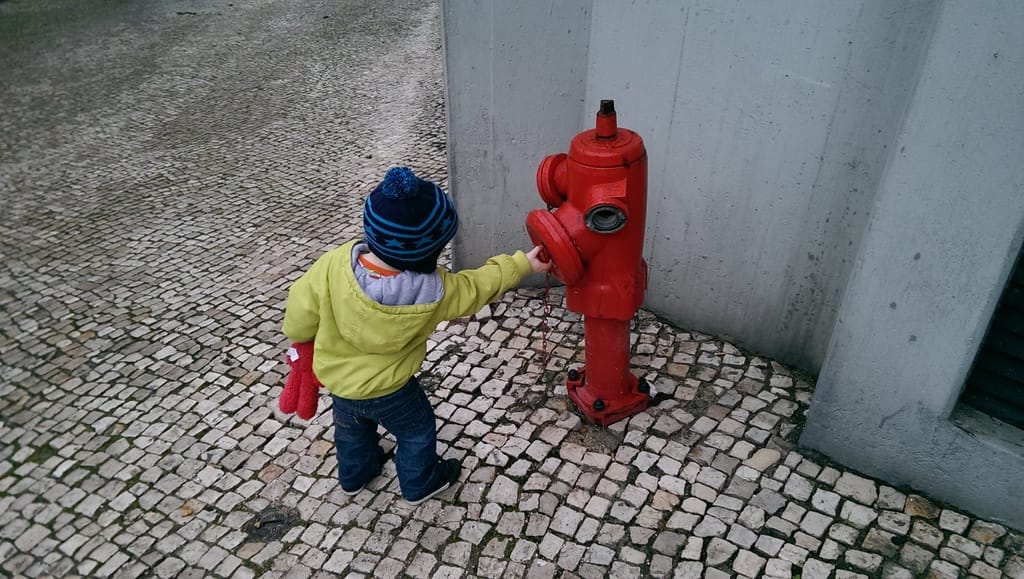 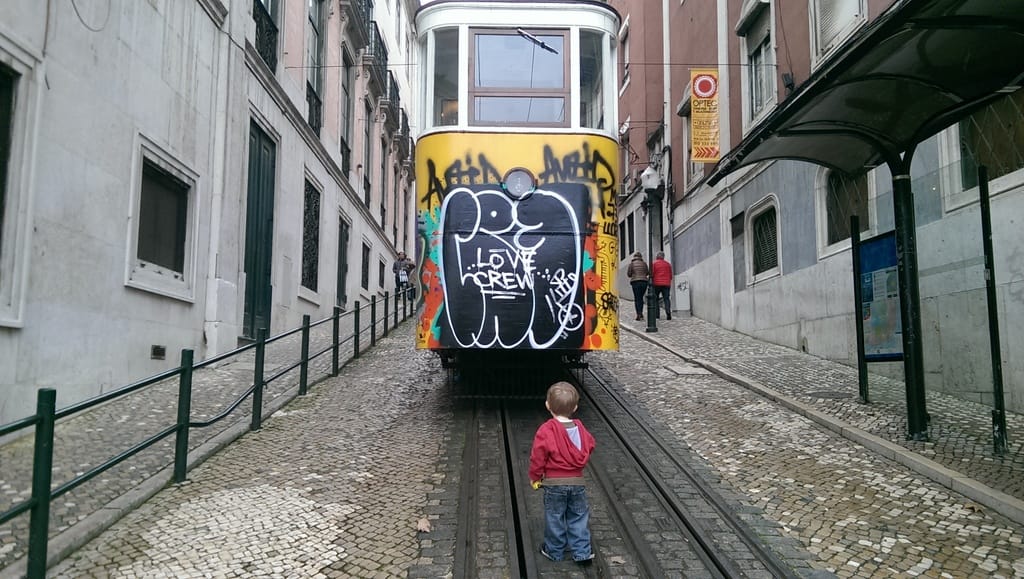 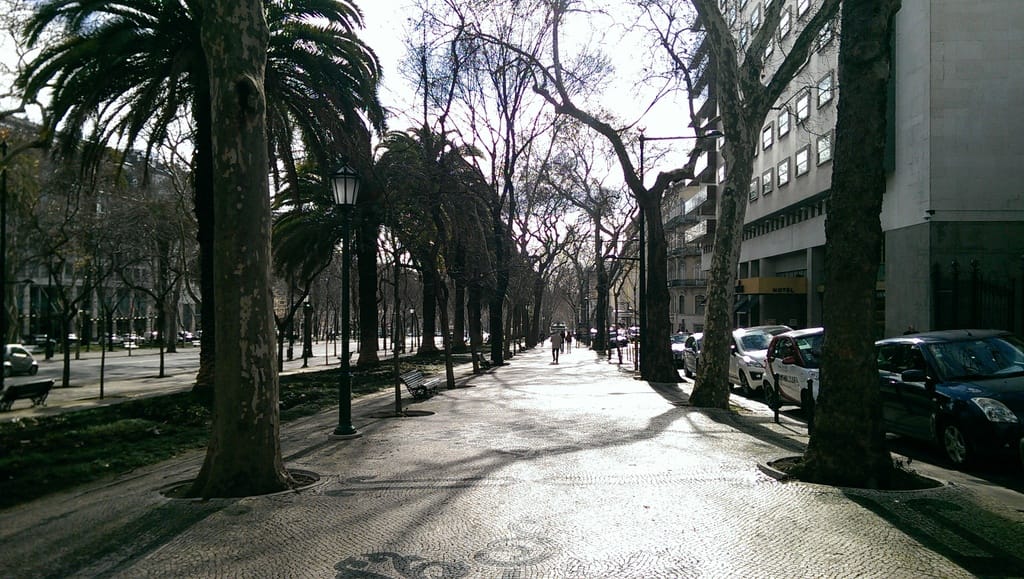 I really liked Lisbon as a city destination. It’s got all the hustle and bustle without feeling too densely crowded. Most people were surprisingly courteous and friendly (for a capital city). You often hear that Dublin isn’t very child-friendly. I wouldn’t necessarily say that, but as the umpteenth stranger waved or chatted at my toddler each morning, I could definitely see a difference in the level of general friendliness. The hotel doormen on the streets saying hi, the random people on the trains offering up seats, the grannies following us about in the shops and babbling merrily in our direction. They were genuinely interested in engaging with my shy toddler who found it all a bit much at times. He’s very sociable normally, but likes his own personal space. All the sights and sounds surrounding us made it hard for him to concentrate on actually moving along the streets. Which greatly contributed to the very little that we actually did. Luckily there’s plenty to entertain a toddler by just walking around in Lisbon. You’ve got trams and trains, various patterns on the pavements, brightly coloured buildings and… red fire hydrants of every shape and size. He was fascinated with them. We stopped every few feet to tinker with yet another one. While he poked a rusty chain I’d examine the nearby buildings. Walking around the streets of Lisbon made me think that visitors to Dublin must find the streets very dreary and grey in comparison to the splashes of colour to be seen everywhere in Lisbon.

Aside from the never-ending hilly streets, one difficulty we had with bringing a toddler is that so many restaurants in Lisbon only start to open at around 7.30pm in the evening. If you want to eat out in a decent restaurant then you’re going to be pushing up against, or well past, what your toddler typically considers as dinner and bedtime. This led to us literally standing outside a couple of restaurant doors and waving at the staff to get them to open up on time for us. In the more touristy parts of Lisbon it’s easier to find somewhere that’s open for more of the day. There are a lot of nice places to choose from. There’s the local Portuguese style of cooking. Or the many steakhouses. Italian/Indian combination restaurants are very common, something we hadn’t seen before. We were a little worried about the quality of food in those, but had a pretty decent Indian meal that was very reasonably priced. A handy option with the Rascal who loves a good chicken curry and rice.

I was touring solo with the Rascal most days, so apart from the trip to Belém and the Lisbon Oceanarium we generally stayed fairly close to the hotel. From what I could gather, the castle overlooking the city wasn’t the most child-friendly location to visit. Efforts to find the butterfly garden failed miserably as it was the wrong season. We went for the simplest option most of the time and dawdled on the streets, visited a few shops, explored all the squares full of fountains and squawking birds. We may have partaken in a croissant or two whenever hunger struck. Back at the hotel there were lobbies to explore and a swimming pool to frolic in. But on our last full day I decided to risk the rainy weather and catch a train further out west of Lisbon on an expedition see what all the fuss is about Cascais. It’s apparently where all the rich and famous people flock, don’t you know. It also has a beach. It sounded like it might be worth a gander, so we set off to see how far our legs would take us before the Rascal turned back into a grumpy overtired pumpkin that needed his nap. I selected my way through various screens on the ticket machine in the train station, guessing some of the more obscure translations, until I found that the return train fare to Cascais was nice and cheap. The Rascal travelled free. I parted with a few coins and we headed to the nearest turnstile with our ticket. We had a much better view than we’d had on the tram, as the train travelled through small stations and on along the coast. At the very end of the line we stepped out into the quirky streets of Cascais with their flowing designs. We pottered about with no real destination in mind, checked out the busy seafront. Then we sheltered from the perennial rain in a pastry shop/cafe. The Rascal had (yet another) massive croissant while I tried a very chocolatey concoction. The Rascal loves sitting in cafes and restaurants watching everyone around us whilst stuffing his face. It’s one of his favourite pastimes, in fact. When we were done he attempted to do a little window-shopping across the road. I had to firmly insist we were leaving once I saw the price-tag of the yellow bus he was eyeing up. Definitely catering for a clientele with a lot more cash to spend than us. It was easy to see why this seaside town would appeal to many with its tasteful stores and beautiful coastline though. 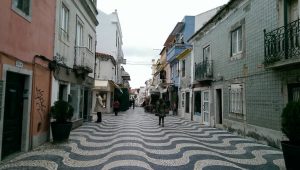 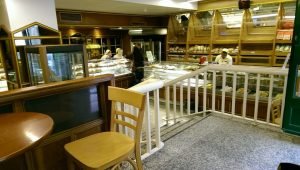 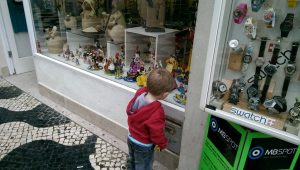 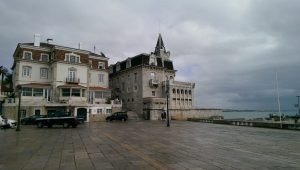 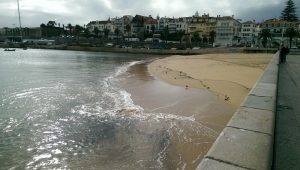 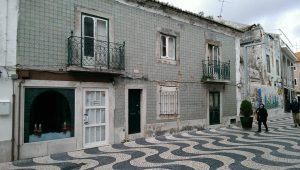 I popped the Rascal in the sling and took a short stroll along the beach, hoping that he’d nod off. But no, there were too many interesting things to see. It was well worth the trip out to see the town which has a different vibe to Lisbon. We could have spent longer there, but we were both tiring, so we returned to the train station and climbed aboard the next train to depart. The Rascal promptly fell asleep across the seats. I stretched out to enjoy the brief spell of peace. Not that travelling by train is quiet, but any period of time where there isn’t a high-pitched voice asking repetitive questions or whining about something counts as peace these days. Once we got back to Lisbon, the Rascal went back into the sling and there he continued to slumber as I took a last look around. When he woke, we caught the metro back up to the hotel and bid adieu to Lisbon. Sadly for us, it was to be an early morning start the following day with a long taxi, plane, bus, train and walk back home to our house in Ireland. “No want plane”, the Rascal started wailing as soon as the plane took off. It was a fun flight home. The temperature had hovered around freezing for the past few days while we were adventuring. It was a frosty 7 degrees in the sitting room when we got back. I fired up the central heating and got out the winter woolies and blankets. Several hours later, it finally crept up to 14 degrees. We were definitely going to miss Lisbon.