Suances is a little town just on the outskirts of Santander.  A convenient spot to spend a last night before the trek to Santander Airport. It was a last minute choice for us, based on what was accommodation was available on short notice. Literally booked the morning we departed from the mountains. We had a brief stop off back in Llanes as we returned along the northern coast of Cantabria and arrived in Suances around midday, Just in time for a toddler nap. In theory. Sadly, naptime was not to be. Our day went horribly wrong. We had no internet access on the move. The address of the hotel was incorrectly pinned on google maps. So when I left the car on foot to locate the hotel building, I was not successful. After ten minutes of wandering up and down the road it was supposed to be on, I was still no wiser as to where it might be. Asking for directions didn’t get me anywhere other than some vague pointing towards a police station somewhere further down the town. I returned, a failure, to the car where we had an overtired toddler set on finding a playground, not a bed. 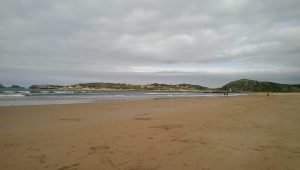 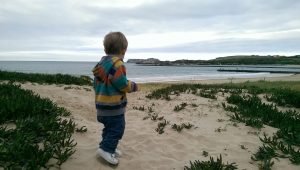 We must have spent an hour trying to figure out what had happened to our hotel. Had it closed? How could they have confirmed a booking then? Something wasn’t matching up. We were all tired and overheated now. Eventually I came across a friendly French? gentleman smoking outside a cafe. I waved the hotel address at him and was ridiculously excited when he indicated that yes, he had heard of this particular hotel. Some gesturing and mixed language directions ensued. The pieces of the puzzle started to fit together. The scale of everything on google maps had helped hide another part of the same road, about 5 minutes drive away. Going on the assumption that the hotel location on the map must be a massive lie, and with a couple of decent reference points to get our bearings, we quickly found the elusive hotel. Oh so easy once you assume that what the internet has told you is wrong. We finally checked in, somewhat worse for the wear. Then a massive naptime battle began. It lasted about 40 minutes. Let’s just say that I was not victorious. 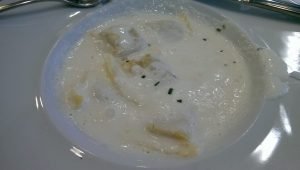 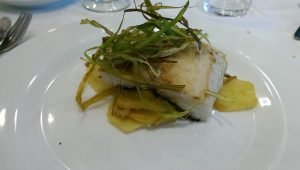 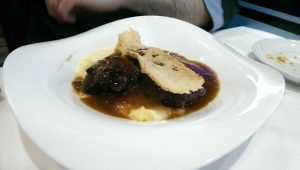 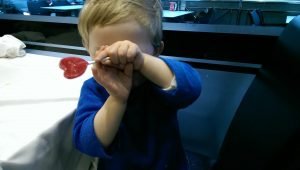 Suances has a couple of sandy beaches nestling at the foot of a busy town centre. We left the hotel, toddler in sling, and cut down winding pedestrian lanes between random buildings until we arrived straight onto a beach. It was cloudy and chilly, so that visit didn’t last too long. We roamed until 8, in search of a decent restaurant and finally managed to choose somewhere with some variety on the menu. Even at 8, we were the only ones eating in Restauarante La Duna. The staff were accommodating both in translating part of the menu, and being flexible on making a toddler-friendly order. Paella would apparently take ages to make up, the waiter was bemused that we just wanted a plain bowl of rice, no sauce. Prior experience has taught me that adding a sauce to the little man’s beloved rice rarely ends well. He prefers to assess the texture and colour of the sauce on his parents plate and make his own judgement call about whether to swipe some. The food was excellent here. We only wished we’d been able to eat as well in other restaurants on the trip. The next morning after breakfast we ducked out (to the horror of the receptionist who seemed convinced we were doing a runner even though we had a couple more hours until check-out time). The odds of a more pleasant journey back home to Ireland would be improved if we had a well-exercised and well-fed toddler at the start. We drove down to park near the beach and decked the Rascal out in his usual colourful seaside attire. It was a beautiful sunny morning and there was no shortage of admirers as the Rascal shrieked and squealed his way about in the waves, doing his best to drag me down into the cold water with him. When his energy finally began to flag, we returned to check out of the hotel and went for brunch with the obligatory final croissants before hitting the road to the airport. Finding our (un)helpful smiling car rental employee at the airport desk was not a good start to the trip. We all did our best not to refer to our last meeting at all. Then we queued and queued and queued at the baggage drop desk for Ryanair. So much for checking in online first – we were given handwritten boarding passes that apparently superseded the online app ones. It was not a good day to be travelling Ryanair. The trip was one long delay after the next.  Delays in the departure lounge. Delays after they’d herded us into a sweltering glass corridor box where we could see, but not reach, the plane that was hopefully going to eventually take us home.

It seemed like a long time before the plane finally touched down in Dublin. Our first priority was to get home, our second was to head straight to Wagamamas for a much-anticipated Chicken Katsu Curry all round. Don’t even mention tapas again to us for the next 6 months. We had definitely eaten our fill of Spanish cuisine.