If you’re looking for an active day in Montreal, a top destination is Mont Royal – the ‘mountain’ with a massive park that was designed by the same guy that did Central Park. It was a good distance away from our accommodation, but worth a visit. We went all the way up Olmsted road to the top of the hill to relax beside Beaver Lake which acts as a ski rink in the winter months. The weather is just right here at the moment  – warm and sunny, but not too hot. From Kondiaronk lookout point there’s a panoramic view of the city below. We took the stairs back down to return to Jeanne Mance Park where we ate bagels from one of the well-known shops in Fairmont and enjoyed the break from climbing steep slopes. 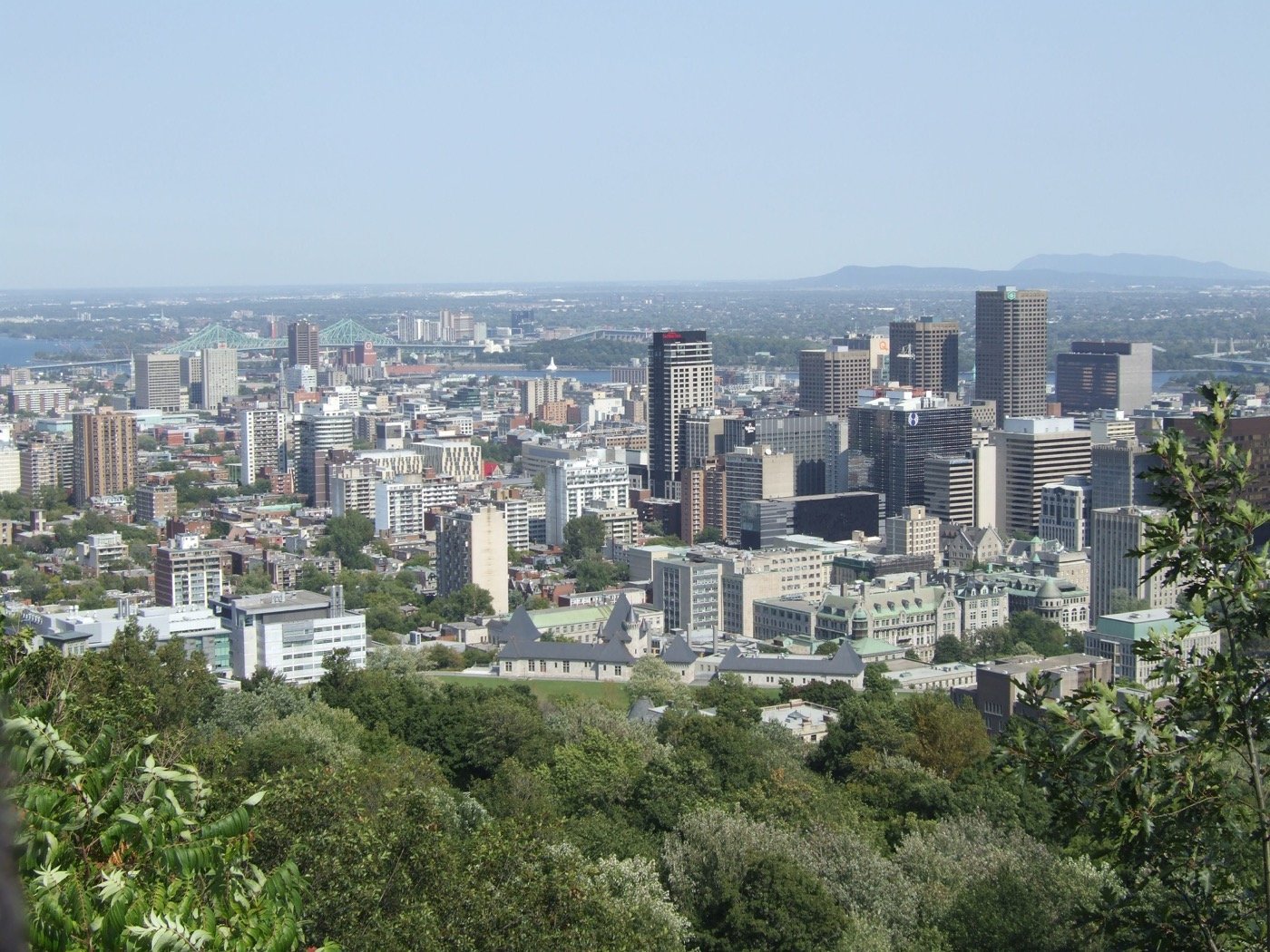 The view from Mont Royal

We had a late dinner in Ghandi, an Indian restaurant that serves very nice food, though in portions that were far too big for people that were struggling to stay awake after a long day. There’s a wide variety of choice when it comes to food in Montreal. It seems like every type of cuisine is represented somewhere, and represented very well. It’s impressive that the trend towards obesity that’s afflicting most developed countries isn’t to be seen here. Having seen so many people running or biking up Mont Royal it isn’t hard to guess why. This is definitely a city for cyclists. The roads are wide, and the cycle tracks extensive.

And speaking of exercise, it’s only been a few days since leaving home and I’m not feeling so guilty any more about my suspended gym membership and all the classes I’ll be missing. That’s because my thighs, calves and feet feel like I’ve been on the treadmill non-stop for 2 days straight. That’s the unfortunate side effect of sightseeing on foot. However, it’s the only way to really see a place. Assuming it’s possible to cover enough ground without resorting to public transport. We’ve walked the length and breadth of quite a large portion of Montreal by now and are really getting a feel for the place. 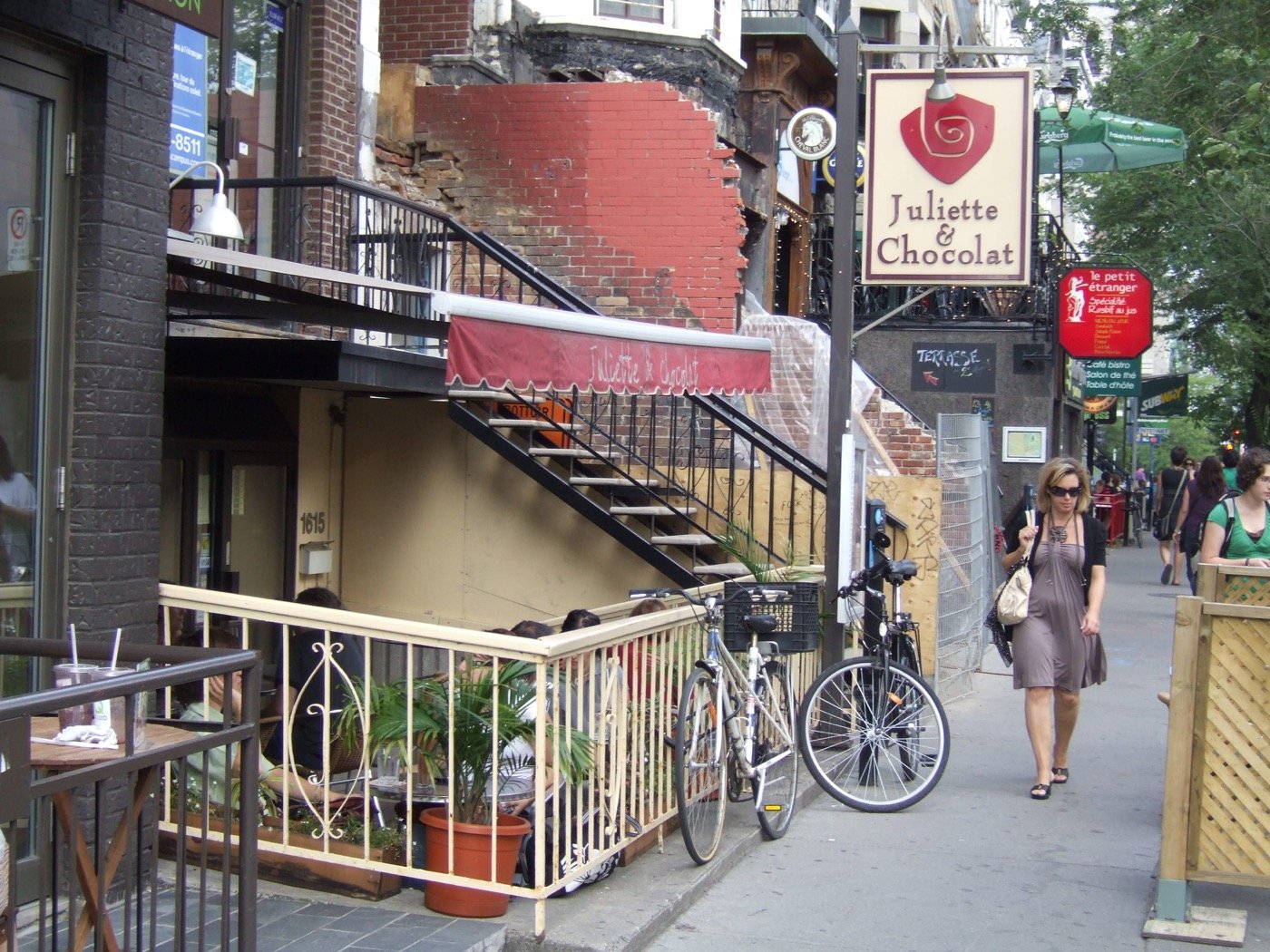 So that means it must be almost time to move on! Our next stop is Toronto and I’m looking forward to being able to compare and contrast. Overall I’m enjoying Montreal with it’s large open spaces and crazy hodgepodge of districts. I’ve become used to whacking my legs off of objects as I edge around the bed in our not so spacious room, and falling asleep to the snick snick snick of the ceiling fan while constant traffic goes past outside. It’s a noisy place to live, but there are plenty of leafy streets that are more peaceful further out. It also seems that no matter where you are in the city, there’s always an open space to be found somewhere nearby when you’re in need of a rest from living it up on the boisterous streets.

The people are also refreshingly friendly. While they will direct passing comments at you in French at a speed that’s incomprehensible when you weren’t ready for it, the vast majority also speak conversational English. And once they realise you’re not a native French speaker and slow it down a little, their French is a lot clearer and easy to understand than your average French person with a strong accent. As far as spending time in a country with a foreign language goes, this is one of the very easy options.