The next place we visited on our journey was Abel Tasman, a large National Park at the top of the North Island. From Picton, we travelled to Nelson where we had a few minutes to change buses for the shorter shuttle on to Motueka. This is a small town, just a little south of the National Park. We walked off the bus, crossed the road, booked into the Hat Trick hostel for two nights, then crossed back to go into the i-site and talk to an elderly lady about our options for the next day. With her assistance, we were swiftly booked in for what she said was an economical half day kayak plus walk in the park the next day, with a pickup from the hostel in the morning. Sorted. We now had a little time before darkness fell to get our bearings in the town and to find the Chok Dee Thai Restaurant, which serves a really good meal for $60 (about €30).

Early in the morning we joined a mini-van filled with people who were also heading out to see the National Park. Abel Tasman and Milford Sound are the two highlights of the South Island that most people mention. It takes about an hour to get from to Abel Tasman from Motueka which makes it a convenient base for day tours. Ours began at Stephen’s Bay where we got kitted out for spending time on the sea. We were heading out with an English couple and our guide who had a crazy (aren’t they always?) german woman filling the second spot in his kayak. After quickly running through the dummies guide to kayaking basics, we pushed out to start our journey up as far as Split Apple Rock.

The journey takes about an hour, going at a very slow speed that allows for the inherent problems that occur when two people are trying to power the one vessel. There was plenty of pausing in different areas for the guide to give us some commentary on the coast and wildlife. His german friend was snap-happy so we spent a lot of time waiting for her to get the shot she wanted, while wishing the guide would give some hints about what directions we were supposed to be going in, instead of waiting ‘til you’d just picked up some good speed going one way before he’d suddenly turn to head in a completely different direction. The waters were nice and calm and the weather was pleasant, so it was a good way to see some of the scenery from a more remote vantage point. The park itself is massive and hard to see on foot unless you’re into hiking and camping for a few days at a time. 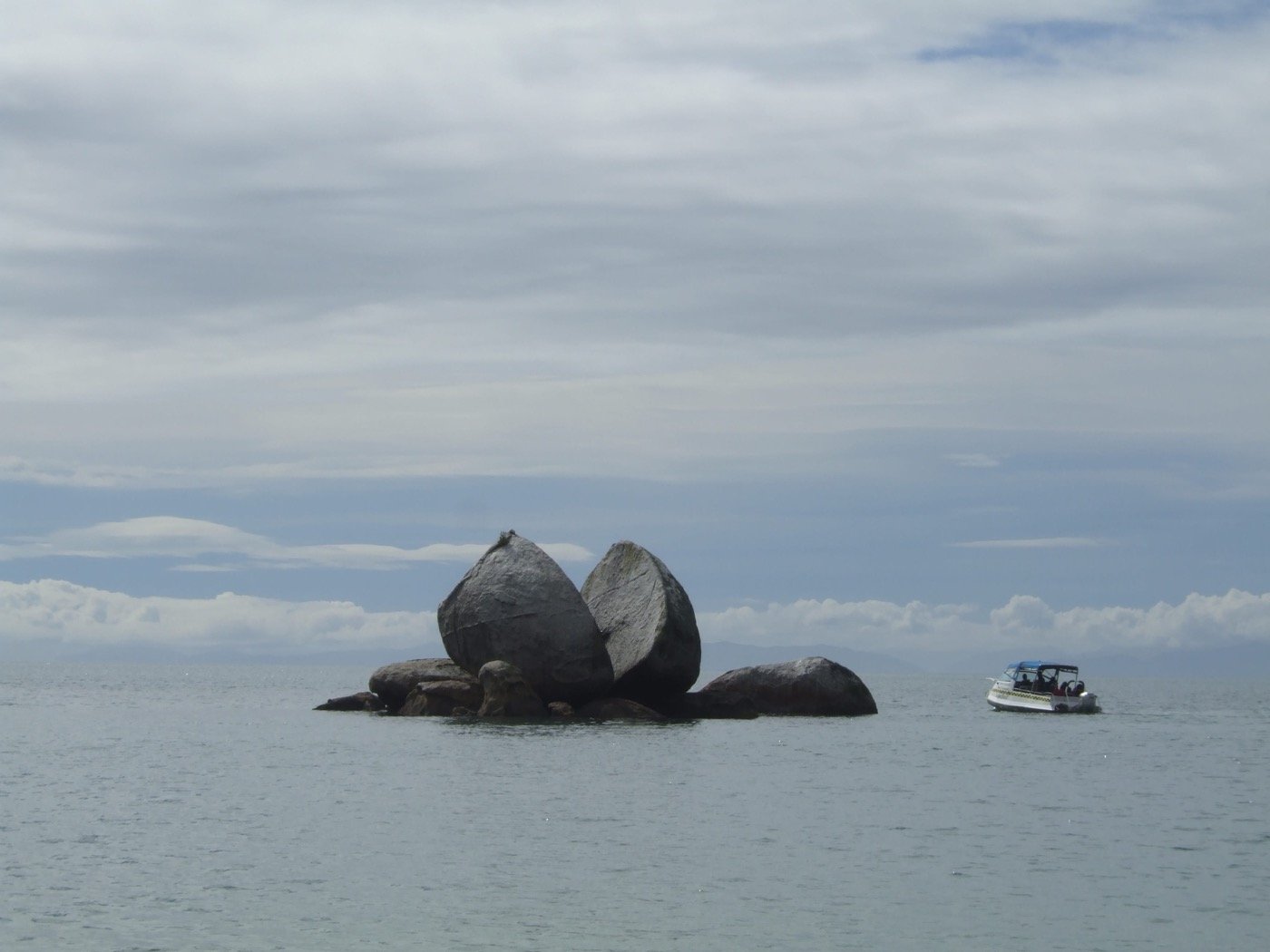 We stopped off for a snack on the beach and to circle around the infamous Split Apple Rock, which unsurprisingly is a piece of granite split in two that looks like… you guessed it… an apple. Then we headed back to our starting point while the guide found more precarious rocks for us to try and navigate on the way back. It didn’t take long for the British couple to decide they really weren’t looking to capsize today and bypass all the tasks we were being set. On our return to the starting point we had just enough time to load up the canoes, get changed and pile into the bus to Kaikoura. There we left the guide and german girl behind (but not before she managed to use the van door to send my lunch flying onto the ground).

We switched over to the Abel Tasman Sea Taxi service for the remainder of the day. Still munching our packed lunches while the crew launched into their commentary on the area. The boat was taking us as far as Bark Bay and we would walk back to meet them back at Torrent Bay. On the way we took a couple of detours to see some marine life. First off, it was to run the boat alongside a pod of dolphins that periodically burst out of the waves for a couple of seconds, or could be seen shadowing the boat just under the surface of the water. With the speed of the animals it was hard to capture them on film. Conveniently, seals move a lot slower and our next stop was known to be a favourite hangout for them. Sure enough, a few could be seen stretched out in awkward positions on the rocks.

Before long we had zipped through the seas at a speed that put our kayaking progress to complete shame, and reached our destination for the afternoon. At 1.30 we were dropped off at Bark Bay, told to head left, and that the boat would be waiting for us at Torrent Bay at 3. After a few minutes getting ready, we made our way to the start of the track. Slight problem here. The ferry was to pick us up in 180 minutes. The sign clearly stated that Torrent Bay was about 2.5 hours walk from here. You’ve got to be kidding. Didn’t we already do the speed-hiking back in Picton? Whatever happened to the scenic walks we actually signed up for?

We knew the drill here. We picked up the pace and started passing out other walkers. Despite having taken a short break at the start, we soon passed the English couple who seemed to be reconsidering the whole idea at the first set of steep hills. The trek through along the coast was scenic, but would be a lot more pleasant at about half the pace we were going. Having had a taste of extreme hiking in Picton, we grinned and bore it as our muscles screamed on the long and incredibly steep slopes up the hills. Our slowest pace was crossing a cable bridge that swung back and forth at the slightest movement. We were passing people out at almost every long incline now. Somewhere ahead of us on the last stretch there was a kid screaming obscenities every time he was faced with yet another steep climb. I hadn’t heard so much cursing since the last time I saw Gordon Ramsey on tv but at this point I felt like echoing the sentiment. We finally made it to the top of Torrent Bay where we could already see the boat making its way in for landing. It was all downhill from there which we knew from experience was easier to do at a jog. We still had ten minutes to go and knew the English couple were way behind. Yet at 3pm we were just getting to the boat and it was preparing to cast off. In fact it was already moving away from shore as we hopped onto the gangway just in the nick of time. Did we know if the other couple were close? “Well, it’s safe to say they could be a while…”. Seeing as you’d have to be the road runner to do a 7.5km hike an hour faster than the advertised time, that really shouldn’t surprise the crew who kept grinning as they asked if we’d had a nice hike.

The boat headed off to the next pickup point before circling back to Torrent Bay. At 3.20 the English couple were finally spotted arriving onto the beach looking none too happy.  The good weather had vanished and it was raining hard by now. By the time we got off the boat and were shuttled back to the hostel we were pretty tired. Unfortunately for Brodie, some guy befriended him in the hostel kitchen and proceeded to make a lot of unwelcome conversation that mostly consisted off how drunk he gets, and telling Brodie to go to places that we definitely didn’t have time to go to even if we wanted to. We were heading back to Nelson in the morning and starting our trip down the west coast so it was time to make excuses and go for an early night.