Niagara: An alternate world of Amusements and Bongs

After a short train journey with VIA Rail, we found ourselves in Niagara Falls. We had 2 nights booked in the Skyline Hotel as part of a web package offer. Just over a week since we hit the road, and it’s probably not a good sign that already I was mostly excited at the sight of a private bathroom that doesn’t have a constant queue forming outside it. A real bed, wardrobe, a proper bathroom? Seems like the ultimate in luxury. It was nice to have a bit more personal space again, and less flights of stairs to climb (something all the hostels so far have involved). We even had access to a small gym from which Brodie is the proud owner of a busted shoulder after getting a little too enthusiastic with the weights. We were meeting our friends from New York here. They took the 8 hour road trip up from Connecticut to visit us. So we spent a few days hanging out with them and seeing what Niagara had to offer. This turns out to be a bizarre mix of natural features and extreme commercialism. At first glance Central Street looks like mini-Vegas with a great view of the falls added. Picture the strip in Vegas, but less casino, more amusement park and bongs in every second shop. The town seems to be a mecca for Americans that are partial to a ‘natural’ drug called Salvia (the kind of thing shamans traditionally use to induce visions) and want it at rock bottom prices. As a foreigner, it’s hard not to misread the signs as ‘saliva sold here’ and react accordingly. 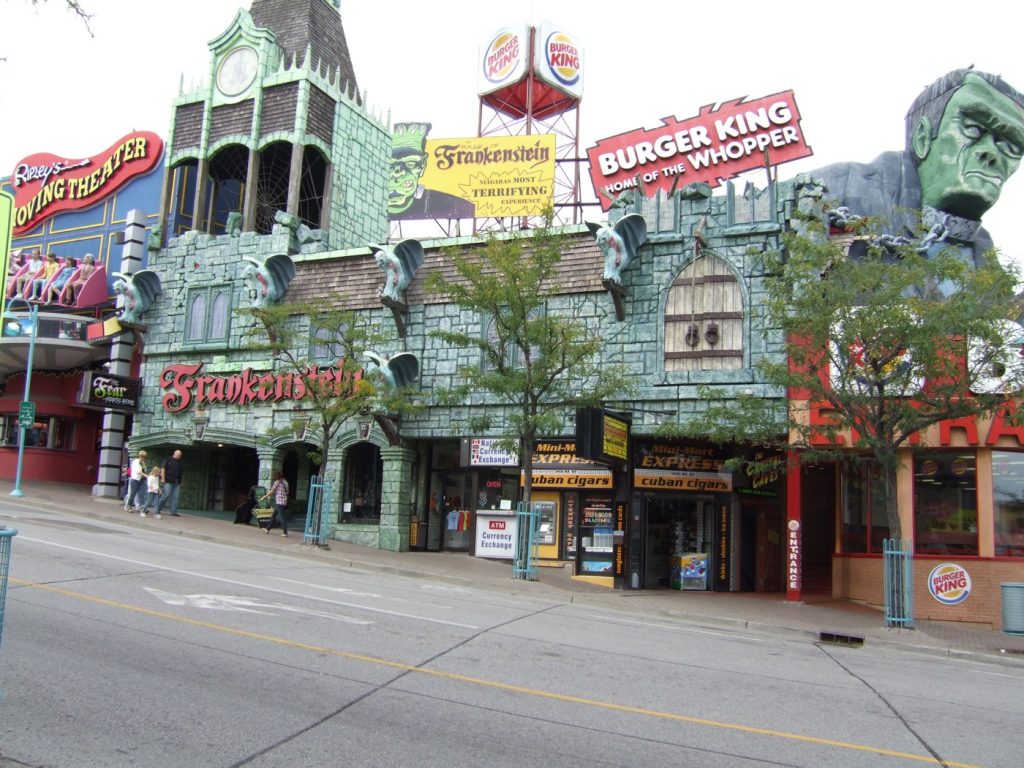 Obviously the Falls straddle America and Canada. It seems to be a top destination for OAPs (special menus in the restaurants) and families with young children. On the American side you have an observation deck, Maid of the Mist boat tours and walks along the Falls. On the Canadian side you have a whole town of hotels, restaurants and amusement rides in addition to the tours. There are coupon booklets everywhere offering discounts for everything under the sun – all designed to persuade you to ‘save money’ by buying some kind of product with a few dollars off an already extortionate price. How much do you really want to pay to go up a posh lift? The Sheraton restaurant on the 13th floor offers an amazing view of the Falls. Thanks to our friends being masters of the art of bargaining for coupons, we were able to take advantage of a 2 for one offer on the buffet meal to go here. The buffet itself isn’t that great, but the view while eating is worth a few pennies as you can see the length of the falls. 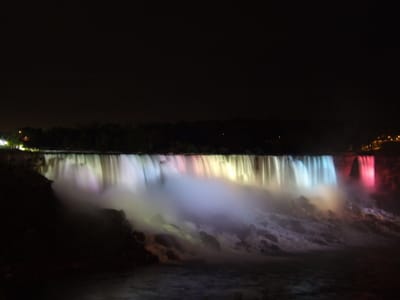 There are plenty of other options for getting a birds eye view though. There’s helicopter tours, the observation tower, or the big wheel. But if you’re feeling made of sterner stuff, you can go for something less tame. It’s impossible to spend a couple of days around our friends without ending up in some kind of mechanical contraption that involves heights and moving at great speed. Last time it was roller coasters off the side of the Stratosphere in Vegas, this time it was the PileDriver which is like an ejector seat with a bungee rope to bring you back down instead of a parachute. Leaving the guys to prop up the sidewalk, we climbed to the top of a building full of bored staff and were locked into seats. Mid-sentence the deadpan machine operator hits a button and the seats catapult into the air.  About half way up you realise that the only thing that could possibly be worse than being catapulted into the air, is coming back down again. The very apex is positively stomach-wrenching as the bungee rope just about stops you from shooting off to the moon. They got such a good screaming performance that it earned us a second go. This time round my stomach recovered a bit faster so I could appreciate the view better. As the seats bounce to a final stop, your stomach eventually catches up and you might have enough time for your brain to register the great view of the Falls lit up at night like a rainbow.