For our last night in Niagara Falls we moved to the Niagara Hostel (formerly Lyons Hostel). This is located on McGrail avenue, a short walk from the Central Street. It’s hosted by the larger than life Patrick, who hails from Vancouver. If you’re ever a little lost and unsure about what to spend your day doing, this is the man to talk to. I attempted to check in early on Saturday morning and utterly failed. Couldn’t check in ‘til 4, and needed to pay with cash. But half an hour later I did come away with a hand-drawn map and more than enough suggestions on how to fill the day. The fact that the others were sitting in Tim Hortons wondering whether I’d fallen into a black hole was a minor detail.

Having taken the drive to the wineries that was suggested by Patrick, we spent our last evening having dinner with our American friends. After a stop off for some fudge, it was back to Dave and Busters where a certain someone claimed modest proficiency at air hockey before wiping the floor with us. When our friends weren’t rocking out to guitar hero, they were shooting up giant alien bugs somewhere in a rainforest in Thailand. Ultimately though, the entertaining part of Dave and Busters isn’t all the arcade games and activities… it’s figuring out what the hell to spend the tickets you won on. Two buckets of tickets later and you might just about have earned yourself a toy car. 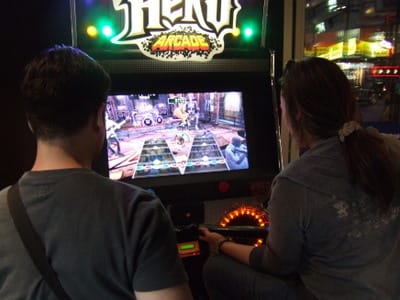 All too soon it was time to say goodbye to our friends and hop on the train back to Toronto so we could catch an internal flight across to our final Canadian destination – Vancouver. I’m still not quite sure what to make of the conundrum that is Niagara Falls, butI do know we had a good time and that I need to catch up on my sleep after trying to keep up with friends who have far more energy than these old fogies. We’ll be sorry to miss their wedding in Vegas later in the year while we’re traipsing around in Thailand somewhere (hopefully without encountering the gigantic bugs).