This post is a bit late, but then I guess that’s part of living with a toddler. I’m behind on everything!

The Rascal has changed so much in the last month. It’s hard to know where to start with everything that’s happening in his world. This 19 month old is physically faster, stronger, steadier, taller. Mentally his vocabulary is expanding at an exponential rate. He has mastered two-word sentences and is rapidly moving on from three. We’re getting a taste of what it’s going to be like a few months down the line when he can really start talking to us. It’s an exciting time, but also an incredibly tiring one. This speedy escape artist has an uncanny knack for going on a rampage during the few seconds my attention is diverted elsewhere. I’m trying hard to learn his brand new language that sounds vaguely similar to English, but mostly like the ramblings of a deranged lunatic. Days consist of chasing after him before he does himself any more damage or watching him teeter on the brink of a massive tantrum as he utters apparently random words and gibberish, but expects me to make some sense of them. 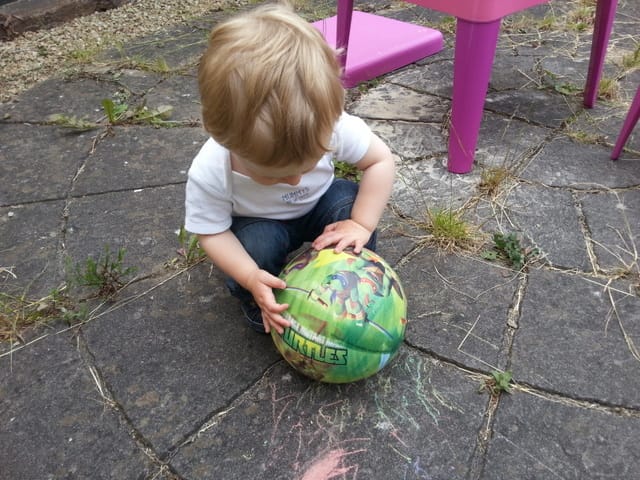 His sleep is disrupted (nothing new there).  He regularly sits up mid-nap and proclaims ‘buggy’ or ‘tractor’ before lying back down and returning to sleep.  He wakes in hysterics some nights, for no particular reason. He absolutely refuses to nap for anyone else but me.  When awake, his’ drunken toddler’ lurching run has my heart in my mouth as he swings around corners narrowly avoiding disaster. When he’s tired his balance deteriorates rapidly and his instinct for self-preservation fails when he does fall. This month is the first time he got a scrape on his knee and encountered the strange red stuff I called blood. Much poking and prodding followed. He face-planted right in front of me the other day and busted up his lip. Toddlers are resilient.  After the initial flood of tears, he was totally unconcerned about it all.  Ultimately it was me that was horribly traumatised by the experience. I winced as he ate and drank the rest of the day. He just accepts scrapes and bruises as a necessary part of exploring the world.  But only if there are plenty of kisses to mend all the ows. He races in from another room and shouts a body part at me until I oblige and kiss the poor bruised item. We’ve agreed that sore bums can be rubbed better though! 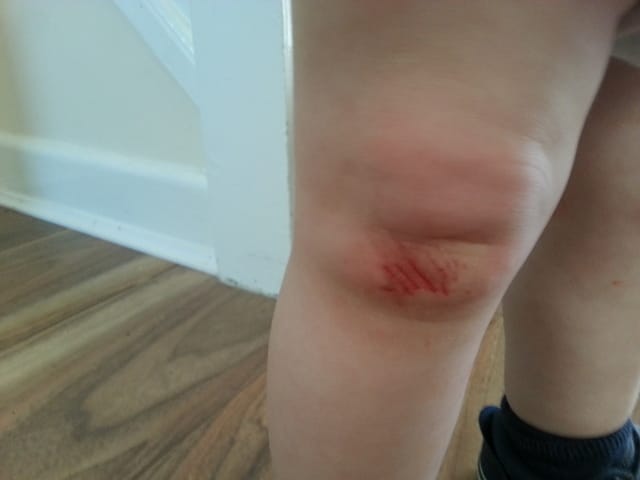 He’s teaching me some interesting facts I had never before considered about the English language. For example, there are a lot of words that rhyme with the word f***. He’s learning them all.  Look, duck, book, truck, cook, hook, muck, suck, tuck, work, yuck… Guess what they all come out sounding like? The Rascal likes to prepend the word oh to everything. Oh truck! Oh book! It’s hard to keep a straight face as he keeps uttering ‘Oh f***’ all day long. Then we visited my sister and heard him pottering about in the next room clearly saying s***, s***, s***. My sister looked at me and raised her eyebrow while I denied any knowledge of how he might have learnt that one. “I don’t know what he’s saying, but I’m positive it’s not that word”, I said. She wasn’t convinced. The next day I figured it out. S*** means shirt or sit, depending on context. If I change his shirt, he runs about chanting it until something else more interesting happens.  Every time his rabbit falls off his truck, he proclaims s*** as he rams her back into it.  He thinks it’s amusing to keep standing up in his bath and join me in a good rousing chorus of ‘Sit down! Sit down! Sit down!”.  Other words that make me cringe every time he says them are ‘clock’ (minus the letter l) and ‘grapes’ (minus the g). 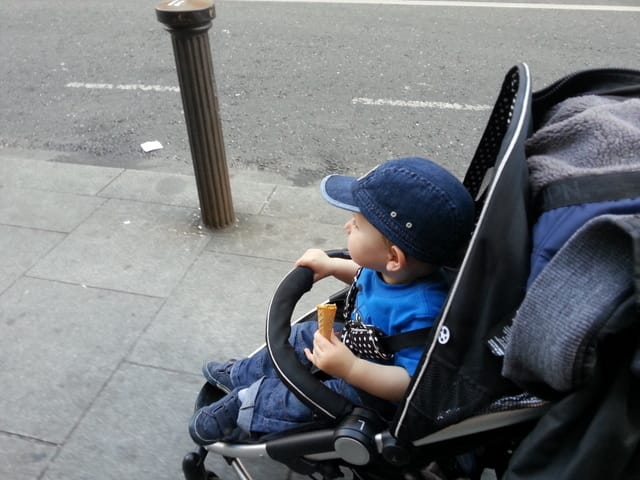 We’re clearly entering the realm of ‘disgusting things that boys do’ now.  Anything to do with dirt or mess is a worthy occupation. A favourite pastime is putting stuff in the bin. He’s on a mission to find anything that could conceivably be considered dirt, and use it as an excuse to open up the bin and explore its contents. I use this to my advantage when it comes to getting all the dirty socks into the laundry, but I now have to inspect the contents of the bins closely before putting them out. However snot is a different matter. Anything he manages to extract from his nose is politely handed to me to dispose of. “Tankooo”, he says, and runs off. He likes the word fart too. Whenever he passes wind, he smacks his crotch and shouts ‘Fart!’ like it’s a great achievement. I can only hope that he restrains himself in public as he grows older. 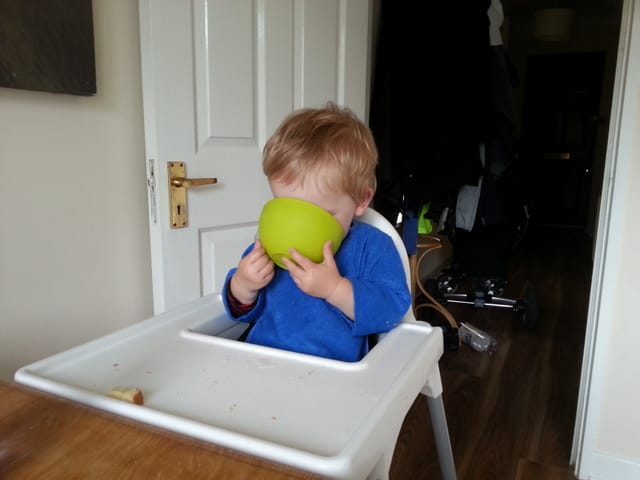 He eats an entire child’s portion of porridge every morning with his father. But without fail, as soon as he hears the microwave ding a bit later, he races into the kitchen. “Porridge!”, he exclaims excitedly, pointing at my bowl. “Mine!”. So I must share my breakfast with him or face the unhappy consequences of a displeased toddler. I commented recently on the lingering smell of coffee when I came downstairs (not a fan) and he responded with “Daddy Tea Fart!”. I couldn’t fault his logic there. 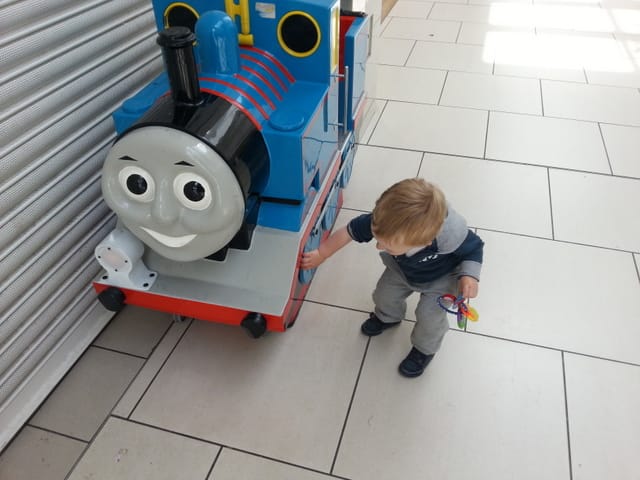 He loves anything to do with cars, trucks, trains or tractors. And of course ‘traders’. Our neighbour has a trailer in the driveway. No outing can be undertaken without a rendition of ‘Oh trader!’.   In the infrequent good weather he spends a lot of time in the garden driving various vehicles around the ground. Often with his phone in hand, running up and down and chatting to whichever of his friends he imagines is on the other end. He loves singing and dancing. We’ve moved on from twinkle twinkle and baa baa black sheep. ‘My baby lies over the ocean’ is a firm favourite. He chimes in with ‘bing back baby’ on the chorus and sings in far better tune than we do.  As for dancing, Footloose is always requested, then he races into the kitchen to bring me back to the tv because dancing is always much more fun with company. He’s convinced that one of the actors is his Daddy.  All the more ironic as his Daddy does NOT like to dance. The Rascal does not take after his Daddy when it comes to this.  His dance moves are progressing rapidly as he practices. Very soon I’ll be too slow and uncool to participate with him. My favourite development is quite recent. He’s always liked a good old spontaneous kiss and cuddle. We say and sign ‘I love you’ to him every day. Now he reciprocates. ‘I… ove… ooo’ along with the gestures. The first time he did it brought Daddy to tears.  It almost cancels out all the tantrums and sleepless nights (almost!).  We’re looking forward, though with some trepidation, to seeing what next month brings.