Montreal: Old Montreal – Getting into the Groove

We’re finally at the start of our trip in Montreal. While our budget accommodation is in an area that Lonely Planet describes as ‘slightly seedy’, the location is actually very good, and the room isn’t bad for the price. We were unfortunate enough that our introduction to Montreal City was that of hauling our increasingly heavy rucksacks along the not very classy Rue Ste de Catherine at a time in the evening when all the homeless and crazies (and more often than not, the homeless crazies) were out in full force. It’s still not the kind of hotel you’d want to send your parents to for a quiet weekend, but it’s great value for a budget hotel close to everything.

The Hotel Abri Voyageur is centrally located at the junction of Boulevard Saint-Laurent and Rue Sainte-Catherine. Most of the different districts are easily accessible if you don’t mind a bit of a walk. To the east is the more ‘alternative’ Ste-Catherine – characterised by an increased density of sex shops and places proclaiming ‘laps dance’. South is Old Montreal and the Old Port. To the North you can head West for Mont Royal, or East for the Quartier Latin.

Our first day in Montreal saw us rise at 6am thanks to our body clocks not being quite adjusted yet. We spent a relaxing, yet productive day getting acquainted with this, the first location on our travel itinerary. We also started getting used to our new travelling lifestyle where there are no real plans and things move at a slower pace. Perhaps a symptom of this more laid-back lifestyle – my appliances seem to only get a third of the power they need from the sockets here. My electric toothbrush struggles to last long enough to brush my teeth even with non-stop charging. Another item that may get evicted abruptly from my rucksack. 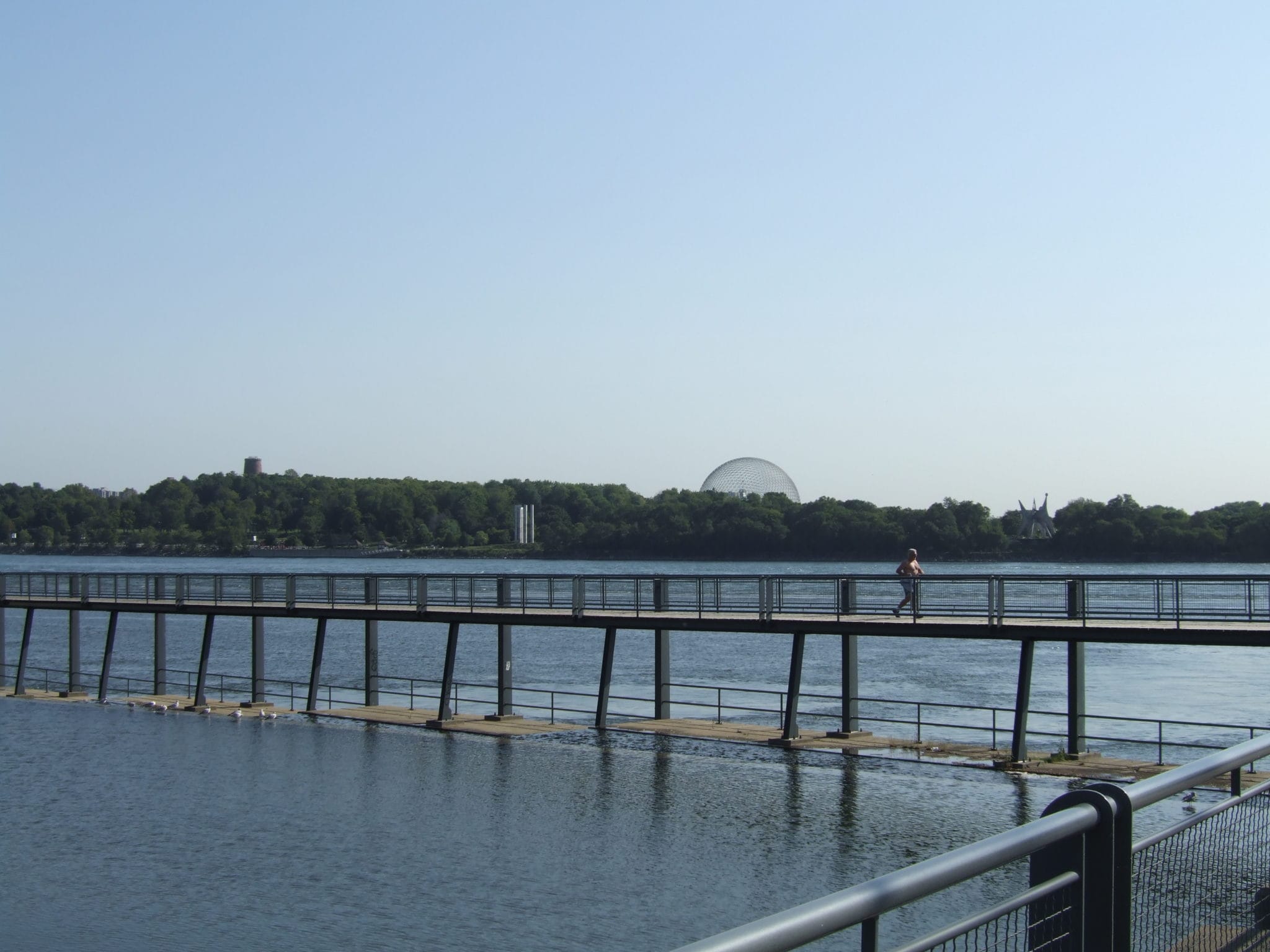 Montreal is divided into distinct areas catering for different types of tastes. Our rambling took us down to the Old Port to walk along the various quays early in the morning when few were to be seen, and again in the evening when stalls had appeared catering for all the people that were taking advantage of the last rays of the sun. It’s a nice area that’s well designed for exercising, relaxing or as a starting point for activities ranging from ferry excursions to a labyrinth inside a hangar and renting upright scooters (we’re sorely tempted to give that a go). It’s so well-planned in fact, that from a bench under the trees you can access public wifi and write your emails as you look out across the water.

Right alongside the Old Port is Old Montreal with cobblestone streets and quaint buildings. This scenic area is chock full of restaurants and shops to cater for the tourist crowd. Particularly at Place Jacques-Cartier which is a wide pedestrian street. This area has the feel of a European city like Edinburgh with the tall buildings and abundance of old style pubs. If that’s not your thing, there’s also the obligatory China town, Little Italy and financial district that you come to expect in larger cities, but the Old Port and Old Montreal are the areas to go for taking a stroll or sitting out to read a book. 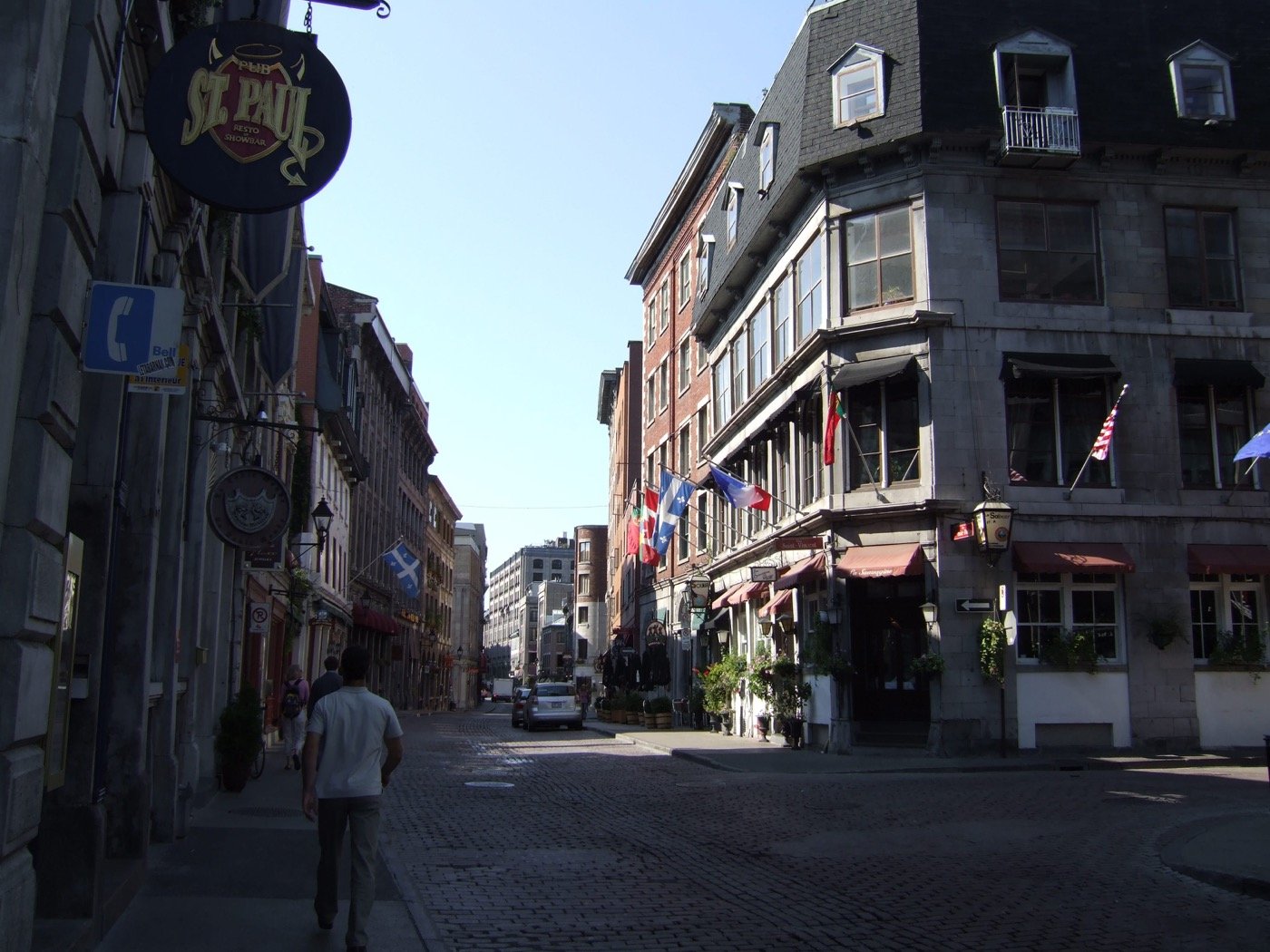 Montreal, in general, contains an architectural mish-mash of old and new – with modern office blocks soaring above gothic churches and old buildings bursting with character. Somehow, this doesn’t clash – the buildings complement each other and bring diversity to the streets. Everything seems designed for people to make the most of sitting out and enjoying the scenery. I’m not so sure that I would enjoy gingerly picking my way up some of those steep cobble-stone roads in the heights of winter, but there’s also a large pedestrian network underground and I suspect people retreat there for the freezing winter and the stifling summer months. At the moment it’s the perfect temperature for exploring the different neighbourhoods and making the most of what they have to provide.