Who tries to rent a car without a drivers licence?

Yes, that’s right – we did! Not intentionally, but that’s the situation we found ourselves in at the start of our Spanish holiday. I could blame it on my first solo night out in about 6 months (for the wonderful IPB Awards). I could blame it on the Rascal still being up at midnight when I got home. I could blame it on the gap between leaving Ireland and actually picking up the rental car meaning it wasn’t foremost in my mind. I could blame it on the inconvenient format of our license which means they’re abandoned in the glovebox where they’re rarely ever thought about. I could blame it on being sick and tired of being the one obsessing over all the finer details of any holidays I take. For whatever reason, we rushed out the door in the morning and made it to the airport in time to somehow still arrive late at our gate. It was that kind of morning. I was trying to ignore the usual feeling that something ‘important’ might have been forgotten.  I always have it. It’s always something minor we can manage without.  But not this time.  Oh no!

As the wheels of the plane left the runway, and Irish lands started to fall away behind us, I remembered. I turned to Brodie and said “The drivers licence. We forgot to bring your drivers licence!” “Don’t worry about it”, he says, “Sure do we even need it anyway?” I looked at him dubiously. “Do we really need a drivers licence to rent a car abroad? Pretty sure that’s considered a necessity.” Nothing we could do about it now though, it would have to wait until we arrived on foreign soil. And so our holiday began with us setting out to find the answer to the burning question – “Can you rent a car without a drivers licence?” 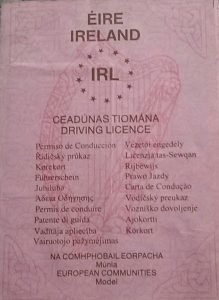 As soon as we had internet access there was some frantic googling. Brodie found reassuring claims that this was a *very* common problem and many rental agencies would let you have a copy of your licence faxed over by the relevant authorities. Unfortunately the online site we’d booked through save costs by making it impossible to contact an actual human with queries. We had a look around Santander train station where we were due to pick up the car in a week, and couldn’t locate the rental office. There was no one to tell us how much trouble we were in. Having a tired and cranky toddler in tow wasn’t helping. After a while we gave up for the day and went in search for our accommodation instead. We would be back early in the morning to find someone to talk to. We hoped.

Our luck improved in the morning when we finally stumbled across the rental car office with someone manning it. It was all downhill from there though.  The perpetually smiling man behind the desk was of absolutely no assistance at all. “No, you must have your actual drivers licence to rent a car”, he grinned. “No, you can’t get the authorities to fax us”. “No, can’t help you at all”. Nor did he want to, by the looks of it. After a brief discussion as we waited at the bus station for a bus to San Sebastian, I returned for a last ditch effort at holiday damage limitation. After several attempt to communicate that I understood we needed the actual licence, not a copy, the cheerful man finally understood that I wanted to post the missing document to him before the rental was due to start. “Oh no”, he smirked, “I couldn’t possibly receive that when it arrives”. Thanks for nothing customer service.

And so, the short answer is obviously that no, you can’t rent a car without a drivers licence. Maybe, possibly, if you’re from the UK and have a very understanding rental agency to deal with. But not if you’ve an Irish licence and a customer service representative who seems to think he’ll get a bonus for just sitting and smiling at you condescendingly. Your only option, we eventually decided, is an express next day delivery courier to bring your licence directly to you for the princely sum of 32 euros.

So that’s what we did. After a brief dalliance with the possibility of sending it to the Spanish relative of a friend, we bit the bullet and had it sent directly to our accommodation in San Sebastian. There we had a friendly host on the reception desk and would have to hope the postal service was reliable enough to depend on.  We were due to depart after three nights. The only thing worse than forgetting your drivers licence would be getting it lost in a foreign country.

My mother was sent to retrieve the important pink slip and entrust it to An Post. We anxiously followed the not very descriptive ‘track and trace’ updates overnight. As we returned to the accommodation after breakfast the next morning we spotted a bright yellow DHL van coasting along a nearby street, and sure enough, there was a big cardboard envelope waiting in our room. Big sighs of relief all round. A costly and stressful way of guaranteeing that we are very unlikely to forget to bring our drivers licence in future should we ever be mad enough to consider renting a car abroad again.

Tune in next week to see what other feats of stupidity our holiday may bring!