Rotorua: To Zorb, or not to Zorb?

Our one full day in Rotorua was spent in pursuit of the activity that had earned Rotorua a spot our itinerary in the first place… zorbing. What’s that? It’s the sport of rolling down a hill in a large inflatable globe, and Rotorua is the place this activity was first conceived. We caught a city bus out to see what was involved. Namely, you take a hill – part of it a straight slope, the other part with ridges and bumps. This gives you the option of a straight ride, or a zig-zag one. There are two rides. Both take place in large plastic balls with a second smaller one inside. Little plastic cords fill the space between the two. The balls are slightly opaque – from a distance you can just about see the figure inside, up closer it’s fairly transparent. At each end of the ball is an entrance/exit point that will accommodate a person (possibly with a bit of a shove) provided they’re not carrying too much excess weight. 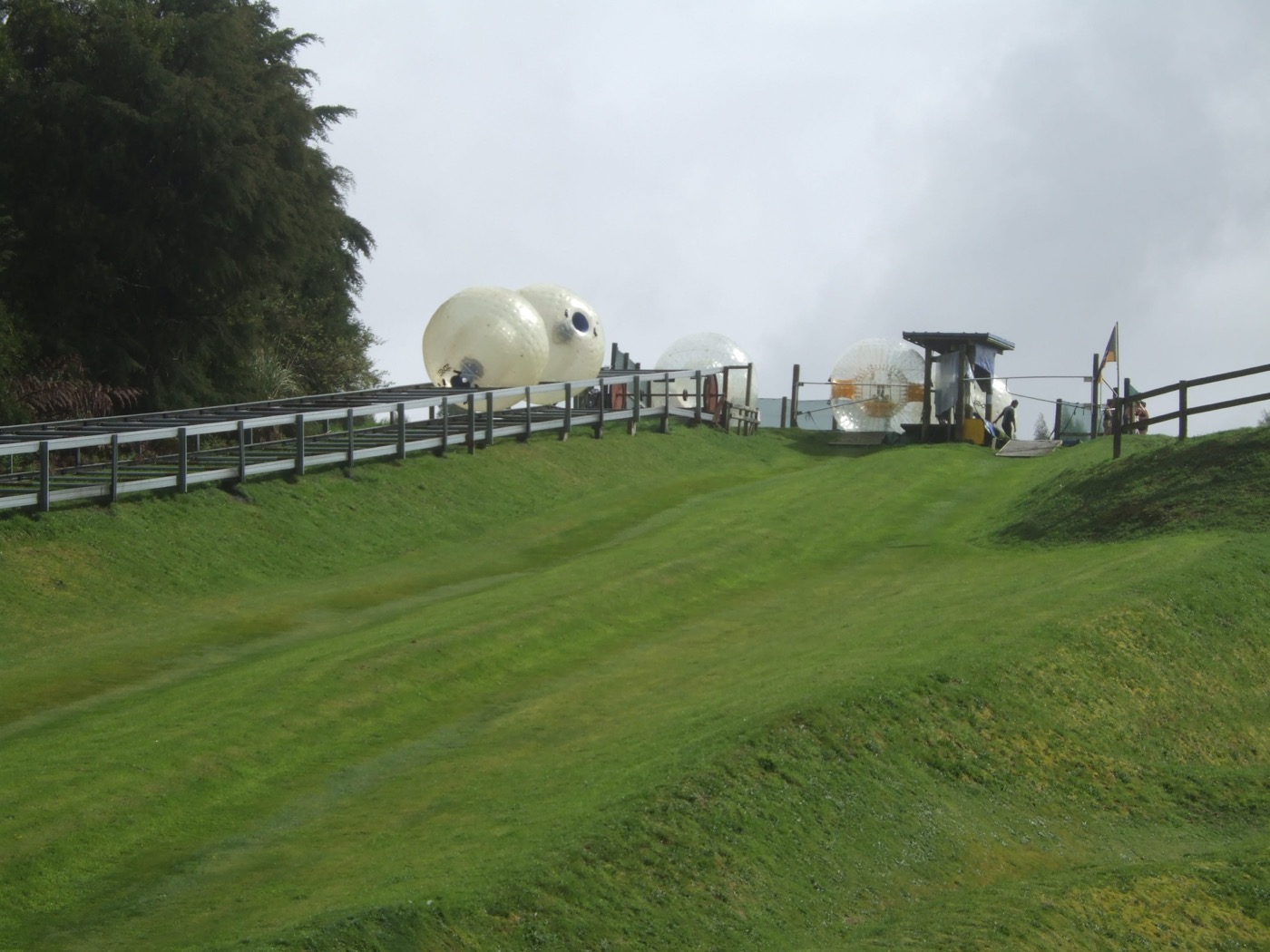 Luckily for us, the day we went happened to be the 14th anniversary of the company. So in addition to paying for a Zorbit ride, we got a Zydro ride for free. Both were great fun to do. To start, you catch a bus to the top of the hill. For the Zorbit, you crawl into the ball and sit in a seat. Several straps and harnesses fix you in, then you’re sent off rolling down the hill, head over heels. The first part is easy enough, but as you pick up speed the world outside blurs out of control and you experience some weightlessness and g-forces. The hill seems much longer than it looked from below now that you can’t tell where the ball is headed. Two ‘catchers’ at the bottom will collect the ball and rotate it so you can slide out feet first and get your bearings.

Next up was the Zydro ride. This one involves getting wet. Not much of a problem as we were getting a good drenching every so often as it was with the bad weather. Getting into the hot water was actually a plus. So, for this one the interior of the ball is empty apart from a puddle of water. You can send two people together down the straight hill, or elect to go alone on the zig zag. Unless you’re a skinny kid, the method of entry for these plastic globes is to take a good run and dive in through the tunnel. Nothing more entertaining than watching the people ahead of you belly-flopping to only stick their heads in the first bit and have to be assisted with squeezing the rest of the way in. No wonder there’s a weight restriction. With a bit of good momentum though, you can dive clean through and head first into the pool of water.

Taking the zig zag route, you make like a hamster in a wheel to get things going and then quickly find up becomes down. Each time it does, you get a big bucket of water in your face. The water ensures that you keep sliding around as the ball bounces its way down the course. A sense of something large looming ahead is the only blurry warning you get if the ball heads towards the reception hut. A second later a good jarring jolt sends the ball back to the waiting catchers. They loose the hatch to let the water flow out before you yourself make an inelegant exit. From the reception hut this looks bizarrely like the Zorb is giving birth. 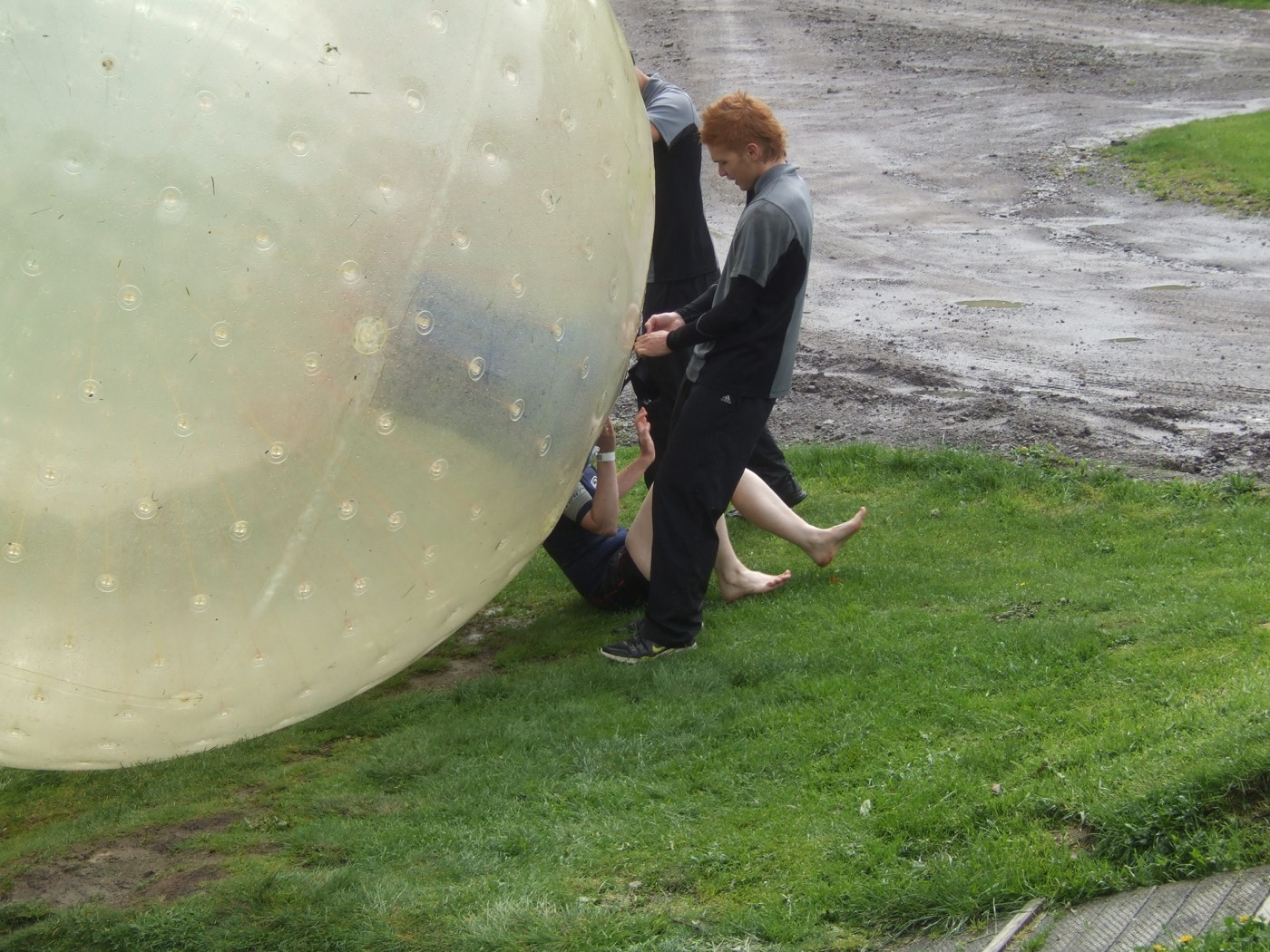 It’s quite expensive to do this activity (about €25 a go). But it’s well worth a try for the novelty of it all. Also, it’s something fun to do when the weather is poor. The sight of the balls bouncing down the hill is enough to stop traffic and bring in visitors to see what it’s all about. Apart from that, Rotorua is of more interest to anyone that loves spa treatments and mud baths. We took a stroll through one of the thermal parks for an extra-intense whiff of bad eggs and to see some bubbling mud baths before calling it a day and going to dry off.