A self-catering holiday in Antrim

Our break away from home didn’t get off to a great start, but we were relieved to arrive at our new accommodation in Antrim and find that it was what was promised, and more. This was our first self-catering holiday in Ireland and top of the priority list was somewhere we could set up a proper base with plenty of easy options for eating, and space for an energetic 3.5 year old to burn off some of that excess energy without injuring himself or us too often. We weren’t quite sure where to check in initially, but apart from that the Ashlea Cottages were a perfect choice for what we wanted. It’s located a short drive away from Portrush and had plenty of onsite facilities. 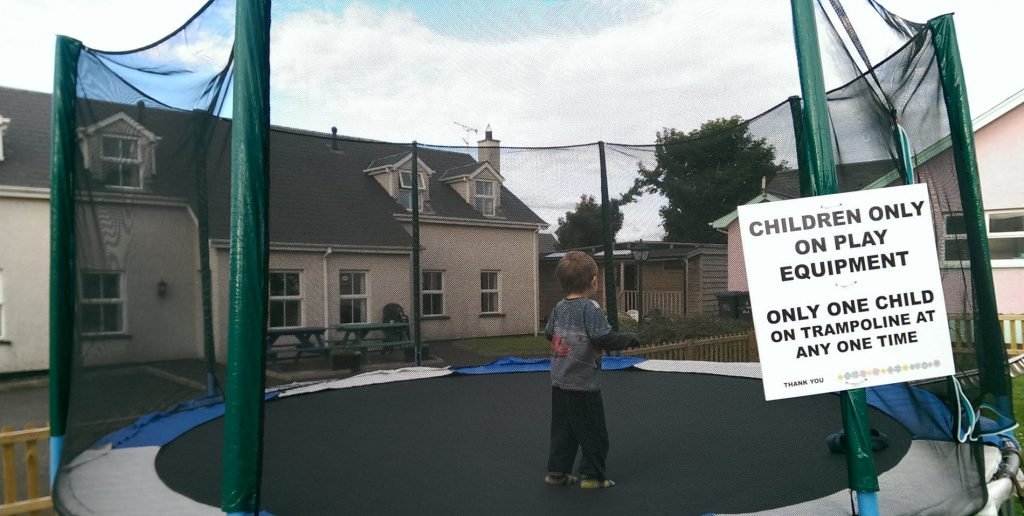 The cottages are different sizes – we had a 3 bedroom cottage which gave us more space than we needed. One double bedroom with an ensuite and two other bedrooms with 2 single beds each. Plenty of sinks and toilets. In addition there was a sitting room with tv, dvd player etc and a kitchen. The kitchen had virtually all the utensils you might need for cooking along with fridge/freezer, oven, microwave and kettle. There was a Lidl just a few minutes drive away which covered all the basic groceries we needed. We stocked up on easy options for dinner and avoided the headache of hungrily traipsing around unfamiliar places trying to find somewhere suitable to eat. There was also a cafe onsite if you wanted to treat yourself to something sweet. We had brought a bed rail with us, so the Rascal went into a bed beside the wall and I took the second bed in that room so he wouldn’t freak about about being somewhere new if he woke during the night. It was a vast improvement on the first night of 3-in-a-bed and no one gets any sleep.

We didn’t take full advantage of our surroundings due to a) sick child b) pregnant mother c) over-worked father. We wanted to relax rather than rush around to see absolutely everything. Considering all that, for our first self-catering adventure in Ireland it worked out quite well. Between the entertainment options for children and the beautiful locations nearby, we were definitely motivated to come back again another time when we’re more mobile. Portrush is your typical seaside town. Lots of restaurants and amusement places. It was fairly quiet at this time of year which suited us. The view along the coast is beautiful. There’s Coleraine nearby for more serious shopping. You’ve got Bushmills up the road. There were a number of beautiful sandy beaches we didn’t get to explore. Drive in any direction and you either get lush green hills or rugged coastlines. And golfing enthusiasts would be very happy with their options in the area too. This is apparently the most photographed location in Northern Ireland, though it’s not recognised by as many people as the infamous Giants Causeway. I had seen some photos of it and our host mentioned it with reference to filming Game of Thrones (the Kings Road). It was about a twenty minute drive away so we decided to go and see for ourselves what the fuss was all about. It’s a somewhat strange tourist spot. You drive down winding back country roads until you turn onto one with a bunch of cars awkwardly abandoned at the side of the road. We took a spot in between the others and wandered up the road to take a look at these stunning trees. Definitely an attraction to try and visit when it’s less likely to be crowded with tourists. You may have to walk quite a distance up the road to get a shot that doesn’t feature other random people in it. You can see why it makes for amazing photos in different types of weather and light. This is the obvious tourist attraction along the coast. A bit of online research revealed that the locals are quite disgusted with the price of a ticket just to get into the visitors centre. To get convenient parking and walk through the displays about the causeway would have set us back quite a chunk of money. We weren’t keen on doing that considering there was no way we were going to make it very far along the coast to see everything this time around. If the Giant’s Causeway tram had been running from Bushmills that day we would have gone for that, but it was still off-season for it to be running midweek. So we went with the total cheapskate option and parked further away at Bushfoot and took the Heritage Railway Path up along the coast. Of course we wandered off in totally the wrong direction first which greatly added to the distance, but it did treat us to some beautiful scenery while the Rascal finally, finally, succumbed to the inevitable and conked out in the sling for a much-needed nap. By the time we reached the Causeway he’d had long enough to take the edge off. It’s not a particularly long walk if you don’t go the wrong way, and are walking faster than the pace of a heavily pregnant woman whose pelvis is aching.

We took ourselves up around the hotel to bypass the visitors centre and found that access to the causeway itself was indeed free, as suggested by the internet. The walk down was grand. Once at the bottom it’s inevitable that you’ll hit the crowds and struggle to get any photos of just the natural scenery. Early in the morning or late in the evening would probably provide some breathtaking views. We satisfied ourselves with clambering over the uniquely-shaped stones for a while before undertaking the epic hike back up again. At that point we decided that I would take the Rascal in for an over-priced scone while Brodie went back at a much faster pace to pick up the car unencumbered by a child on his back. 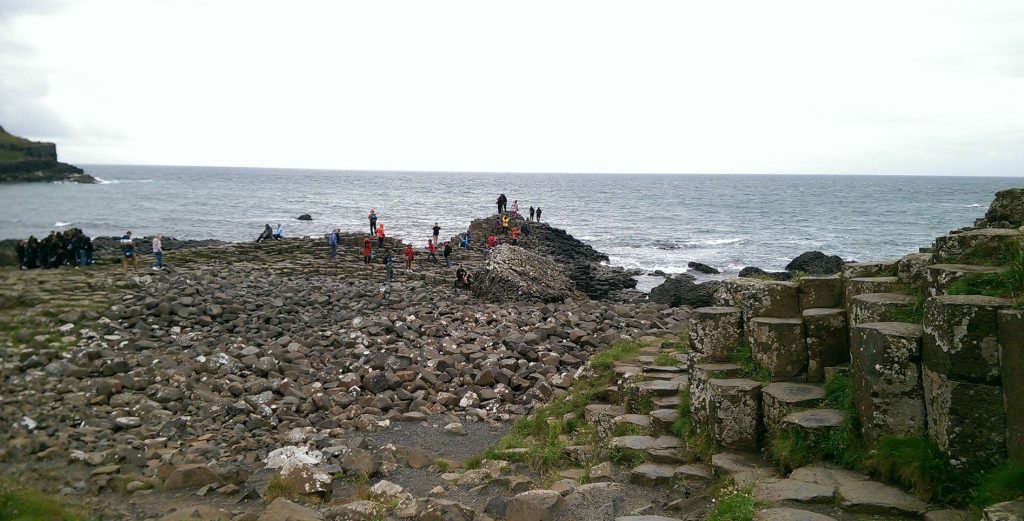 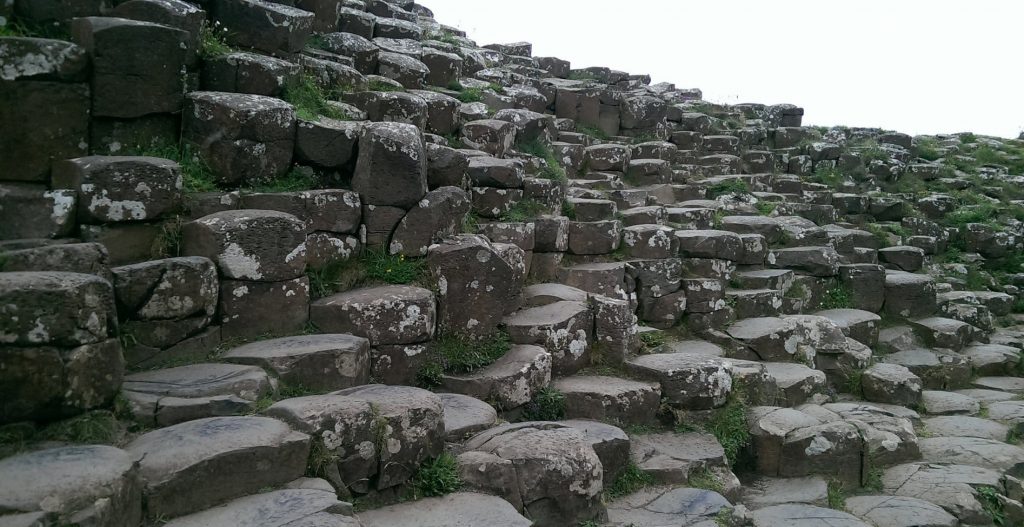 We decided to drive some of the Causeway Coastal Route on our way back home. It’s a nice change from the busy motorways, and lets you see some of the best parts of the Antrim coastline. We only did a couple of stops but there’s plenty of places you could spend a bit of time at along the way. You can cross this rope bridge originally constructed by salmon fishermen over to the island and take in the view across towards Scotland. We didn’t bother paying to walk down and cross over the bridge this time, preferring to save it for when we have two older kids that would appreciate the adventure much more. We stopped off here for a quick lunch. It’s another nice seaside town with a good playground. Highly recommend Bob & Berts for coffee and a very tasty sandwich.

We had plans of visiting the Glenariff waterfalls but well, we got lost on the roads and found ourselves accidentally heading inland. The Rascal was asleep in the back of the car and we didn’t think it was worth turning around and waking up a cranky child only to find he had zero interest in seeing anything, waterfall or not. So we continued on the road back home to Dublin, ending our little trip away. Holidaying with a sick child is difficult, but thankfully we hadn’t been planning an excursion abroad or it would have been total disaster. Antrim is definitely a great choice for a holiday with kids in Ireland. I expect we’ll be investigating a lot more of the Irish coastline in the next few years with a child on each of our backs.