Winter is harsh in Montreal. At best it’s far colder than we ever experienced in Ireland. I’ve learnt that it’s dangerous to only check the temperature before you dress for going outside. The wind chill is what makes all the difference. The average ‘real feel’ temperature fluctuates greatly, but it’s generally somewhere between -10 to -40 degrees celsius.

On a still day you mainly need a protective windproof outer layer and a couple of layers beneath. The inner layers of air will insulate and build up heat so long as you keep moving. Exposed flesh will feel the burn of the cold depending on the temperature.

On windy days it’s not so simple. The wind seeks out every chink in your clothing. It gusts up your sleeves where they meet your gloves. It flows down the neck of your jacket and pushes out any warmth that had gathered there. You can’t remove your gloves for even a few seconds without feeling pain all the way down to your finger bones. Those days are tough.

The worst days here though, are the ones where snow turns to ice in every shape and form that you can possibly imagine. Thin brittle layers of surface ice covering partially melted snow. Thick heavy plates of glacial ice that are too tough to be broken. Slushy somewhere-in-between ice that will suddenly plunge you into icy water. All lurk dangerously… waiting for the unfortunate step that turns to a slide and results in a hard crash.

The quickly changing weather and sudden large temperatures rises and falls combine in spectacularly nasty ways. A classic example is today when the partial thawing of yesterday has ended within 24 hours. The temperature drops once more leaving behind a frozen tundra. Some of it is melted snow that froze solid before it had the chance to drain away. It spreads over the remaining snow which has been compressed into heavy ice. In smaller patches you can entertain yourself cracking by a clear glassy layer over the dirty snow and watching it splinter into shards.

The most dangerous ice is what’s called ‘freezing rain’.  The falling liquid drops get supercooled in the subzero air as they pass through on their way to the ground where they freeze upon contact. It quickly builds a glaze of slippery ice on every surface it hits. If at all possible we don’t venture out at after freezing rain has fallen.

Mostly though, thick glaciers and opaque sheets of ice glitter dangerously outside and they can’t be avoided because they linger for weeks. I edge slowly and carefully along paths, relying on the grit laid on top to keep from falling, but aware that every single step risks a slip. This ice can’t be cleared away like the snow that preceded it. Every movement is a leap of faith. It’s always that moment when you got distracted, or thought the ground had some grip. Next thing you know you’ve gone down fast and hard before you’ve even registered a foot sliding out from under you.

It’s not all bad – after all there are a multitude of indoor and outdoor rinks where you can make the most of all this ice. On Sunday mornings my son follows his group around the rink as they do their drills. Rows of little ducklings moving about in lines after their teachers. Every so often one falls to the ground, but they mostly seem to bounce back up again with the benefit of a low centre of gravity.

I dutifully drag myself out on bitterly cold evenings to strap on a pair of skates too, and wobble gracelessly around after instructors fearful of yet another nasty fall in the pursuit of improvement. Any small progress I do make is humbled as I watch the instructors glide and spin effortlessly in comparison. Then I see them attempt a jaw-defying leap that ends just as badly as my clumsy moves. I admire their skills. I wince in sympathy at their falls. You can love the ice, but you better always respect it no matter how good you are.

Back in the reality of everyday life the ice is no fun as the cold short days slide endlessly past. Frozen ponds isolate trees and lonely benches. Mini icicles hang from porches and railings. Everywhere there are frozen scenes both breathtakingly beautiful and achingly sad. The mini icebergs that lie across the land are chipped away slowly as the days go bye, before it all gets buried under a new carpet of snow.

By spring these hulking rivers of ice will eventually thaw. Even if it feels like the winter is never going to end. Slowly and painfully the ice and snow will diminish. Until then, for every step we take, we remain wary of what lies beneath. 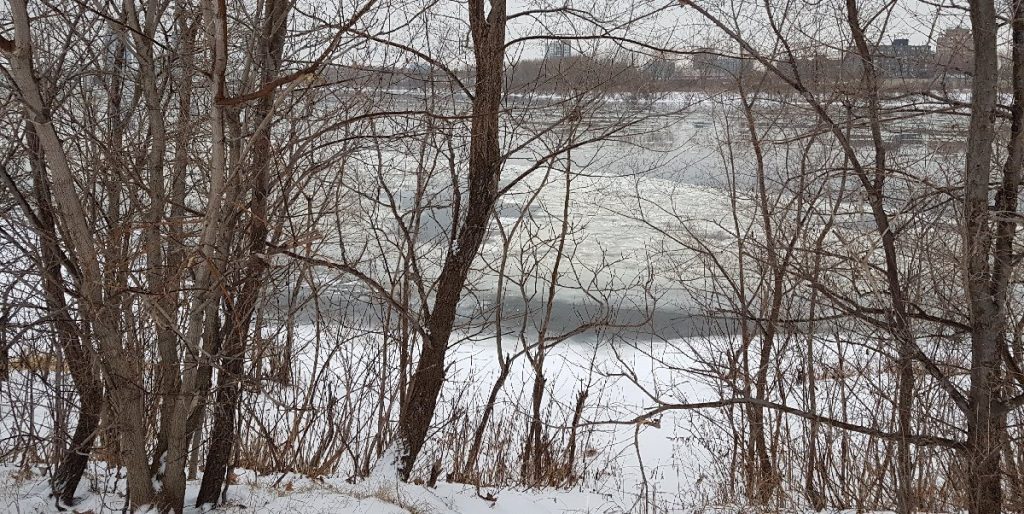