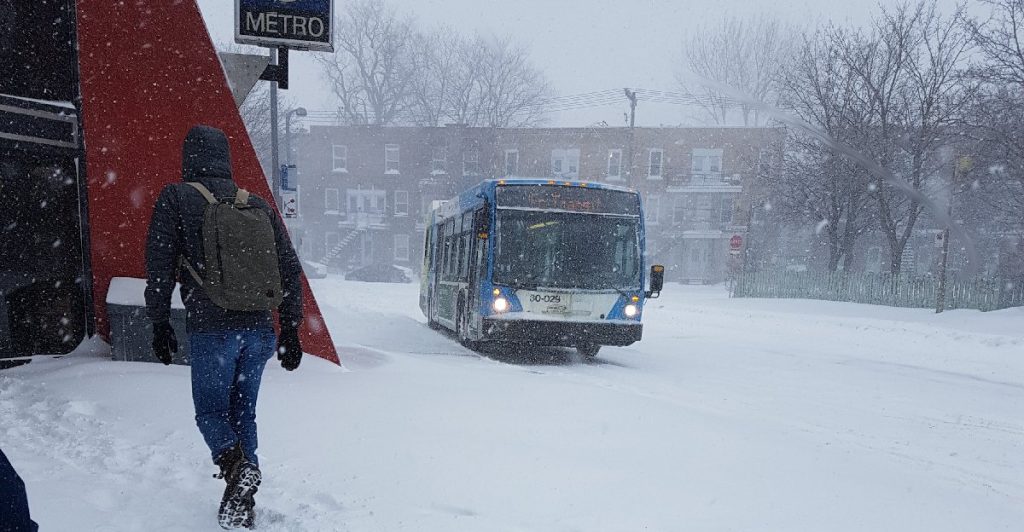 When we attempt to leave the house that morning, we go in full snow gear. Sturdy boots. Winter jackets and ski pants tucked securely into the boots. Reliable hats and thick gloves. Hoods, face covers and ski goggles protect as much flesh as possible from the bitter winds. We step out into unfamiliar territory. Behind my visor the whole world is cast in a surreal orange hue. The roads are quiet, almost abandoned.

Progress is slow. A thick layer of fresh snow covers the ground. We navigate around random piles of previous snowfalls that are bunched up on the paths. Leftovers from last weeks snow removal operation. Icy pellets of snow fall steadily, gusting past in harsh blasts that we lean into, trying to make progress up the path towards the promised warmth of the nearest metro station. I heft an awkward bag of ice-skates and turn regularly to offer my arm to the struggling six-year-old. I practically drag him the last lengths, as he flounders in a sea of white.

We join the steady stream of dripping travellers moving down into the bowels of the earth – stripping sodden clothing as we go. A blast of noise as a train hurtles past on the opposite line. The next one sweeps us off into the dark tunnels on a crowded carriage.

A smell of damp clothing meeting stale warm air. Bustling flashes of activity are revealed at each station. This noisy, colourful, crowded underground world contrasts the unusual silence of the one above. We sway back and forth in time with the train until the automated announcement for our station. Passengers flow out the doors onto once-bright tiles now stained with the salty grey of snow and grit residue.

Back up we come from the depths of the earth, bracing ourselves at each level as the temperature drops once more. It plummets to minus 30 degrees celsius as we step out of the station. We’re almost blown back in again by the backdraft.

Now we trudge along paths that lie buried in growing drifts of pure white. The wind ferociously whips chips of ice against our defences, seeking out any sliver of skin exposed between the layers. There’s an instant tingling sensation followed swiftly by a slow burn that lets you know to take this weather seriously.

The little guy is done. Too cold. Too tired after fighting the elements to the halfway point. We seek the shelter of a doorway by a bus stop, already admitting that this journey is most likely going to defeat us as the minutes of his ice-skating lesson tick past and no bus comes to our rescue. The cloudy sky grows even darker. Snow ploughs roar close by, hidden by vapour clouds that limit our vision to a small bubble surrounding us.

The tall man also waiting behind us belts out praises to the Lord above. Free-form rapping his worship in competition with the blizzard. I exchange glances with my son as it continues on and on, with barely a breath between each thought. Intensely annoying, but most probably not unsafe I conclude. My son hunkers down in the corner and innocently stares at the bizarre performance. Still no bus.

Out of the gloom snow ploughs scrape past in teams, funnelling swathes of powder to each side. The other large man (in girth not height) shuffles out periodically to the side of the pavement and waves enthusiastically until finally one of the drivers notices him and obliges. His vehicle swings close to where we huddle in the doorway, flinging a mountain of snow down past the lonely bus stop. Still no bus, but at least Everest will not block entry when one does arrive.

The stranger grins in satisfaction. He admires, in broken English, my snow googles. The visor provides clear vision and protection from the elements. I smile and nod. Sniggers and double-takes are common reactions when we march past wrapped up like arctic explorers. Ultimately most natives of this city end up rethinking their amusement as we stride confidently onwards, and they stumble blindly through these snowmageddon days.

Meanwhile it’s time to admit defeat. We carefully reseal every gap in our clothing and plough on towards the metro, resisting the urge to give a parting hallelujah to those that still wait in vain, apparently abandoned by their God.

“The coldest snow storm in nearly a century!” the headlines will announce the next day.