Taupo Bungy: Dangling by a rope

Another day dawns bright and… wait a minute… it’s actually not raining! We take advantage of the temporary respite to have a look at some of Taupo’s main attractions. We call up shuttle2u and get a convenient all day pass for the paltry sum of $15 each. For most of the day we’re getting ferried around by Phil, an Aussie who has been settled in New Zealand for the last 26 years. He keeps up a colourful and politically incorrect running commentary as we drive around, so we get some more background on what we’re driving through, and what it’s like living in New Zealand in general. Highly recommended as a means of transport around Taupo even though Phil will try and convince you to search for non-existent Koalas in the eucalyptus trees beside the road.

Our first stop of the day is the Aratiatia Rapids – another recommendation from Mark who spent some time in the area. At this point in the Waikato river the water should rapidly descend, but instead a dam has been built to generate power. As part of the conditions for building the power plant, 3 or 4 times a day the dam is opened and water is allowed to rush into the gorge restoring the river to what it naturally once was. Taking your cue from the warning hooters, you can stand on a bridge and see the water starting to trickle through from the dam. It slowly wends its way into the first of the pools, building up in force and fury until the water really starts frothing and surging further into the gorge. From a couple of lookout points you can watch the water grow in volume and strength until the gorge is hidden and the water flows freely through. After this, we stop off nearby at Lava Glass to see some colourful glass containers being created from scratch. 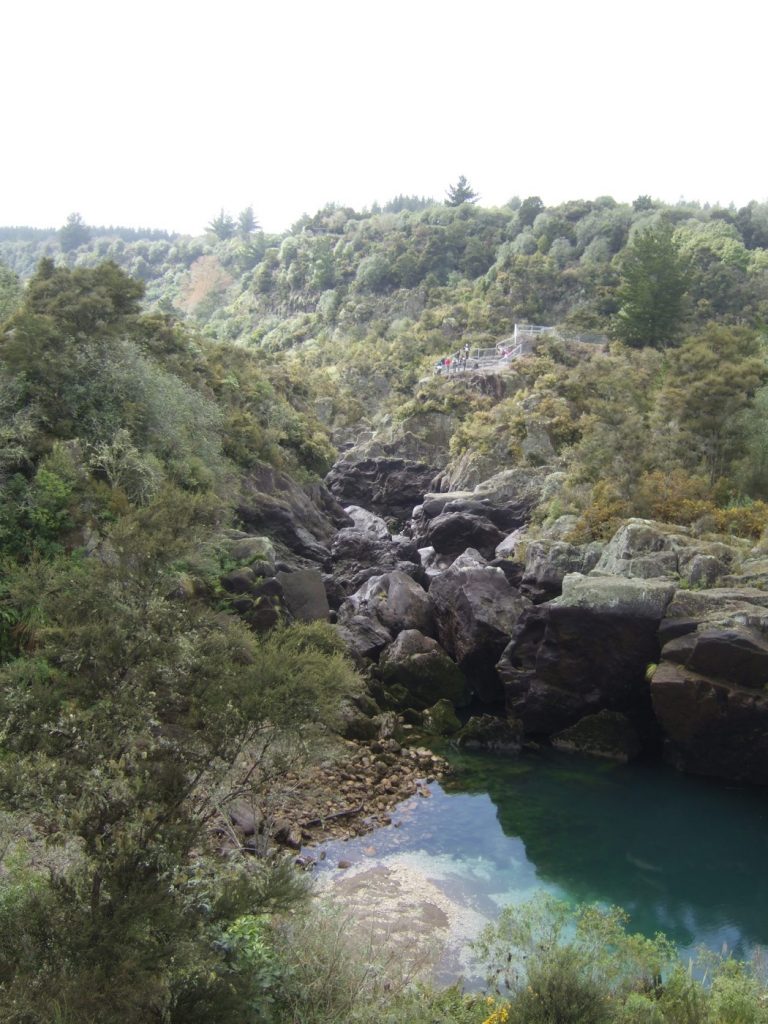 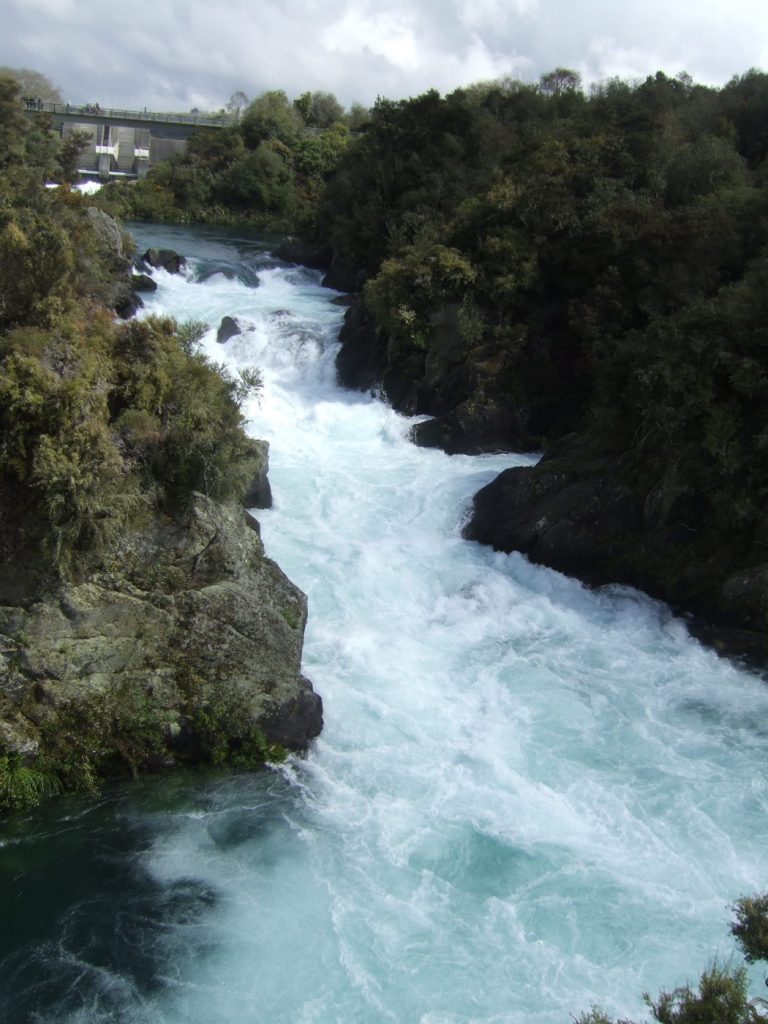 At my insistence, our next destination is Taupo Bungy in the Waikato River Valley. This is New Zealand’s highest water touch bungy that takes place from a platform extending over a very scenic spot. A bungy jump is one of those things I’ve never got round to doing before, and this seems as good a time as any to change that. I had mentioned doing this quite a few times during the trip without much positive response. Each time Brodie had looked surprised “are you really thinking about doing this?”. With the confidence of someone who assumes you’re not serious and will lose interest soon if not encouraged, he stuck to his guns and wasn’t going to be joining me in a needless attempt to scare myself silly.

Fully prepared to do this one solo if need be, I announce to the driver where I plan on getting off next and there’s a disgruntled “Well, I guess I’m going to have to do one now” from beside me. There’s nothing more motivating than the shame of joining the ranks of a large number of guys at the bungy jump that are leaving their partners to jump and staying put on terra firma. After signing away our lives (or future dead bodies) over and doing a quick weigh-in, we find ourselves crossing the platform to the jump off point.

The two experienced staff methodically move through all the safety checks and double checks while making every effort to distract the victim with chatter. Next thing you know, you’re edging your way to the side of a small ledge with two helpful footmarks indicating the start position. Shuffling and hopping along with your feet bound is one thing, but it turns out that bungee rope is astonishingly heavy, leaving me unsure about whether I’ll be leaving the platform completely involuntarily if I let go of the rails too soon. With a little assistance I make it to the start point without slipping off early. As I start to really contemplate the very big drop just below me, the guy starts a quick (and quite hypnotic) countdown and almost before I realise it, I’ve leant forward enough for the weight of the rope to take effect and there’s no going back. 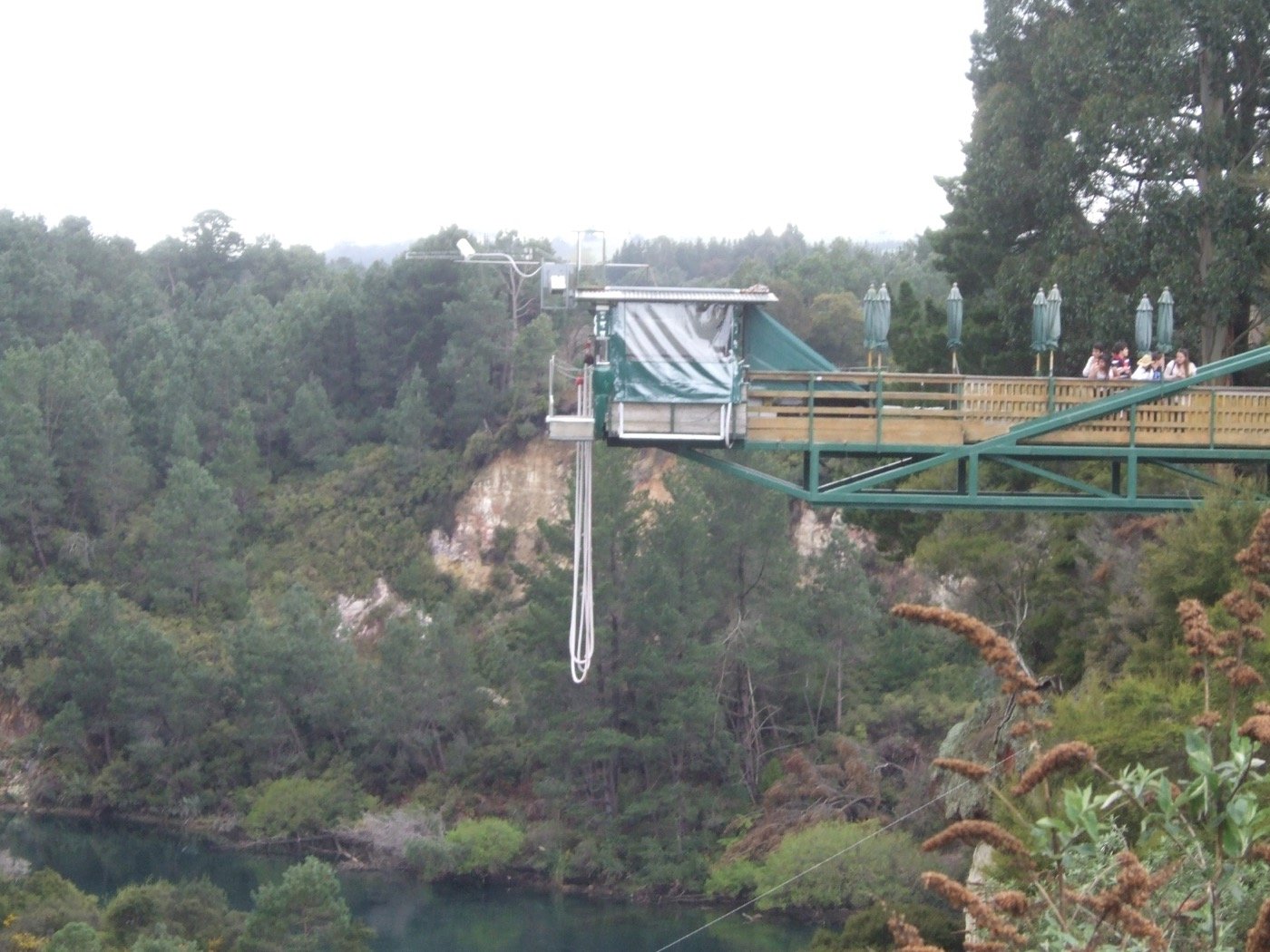 There’s a big rush of air past me as I plunge to the depths below, until suddenly I run out of rope and find myself on the way back up again. A few long bounces later the rope is being lowered until I reach the waiting boat. There I can be unhooked and return myself to an upright position before joining Brodie for the long trek back to the top. It’s a bizarre feeling to take a leap into the air, fully aware of the height you’re at. For all the anticipation beforehand, it’s actually over quite fast. One of those things you have to force yourself into doing unless you don’t have a healthy fear of heights and death. I find myself very relieved I haven’t eaten for a few hours before attempting it, but glad to have had the experience.

It’s an expensive way to spend a few minutes that I doubt I’ll repeat often, if ever – but I’m glad to have done it once in such a great spot. We can now safely load up with a snack while watching other groups take the plunge. The line is being held up for ages by a Spanish or Italian girl who is at the centre of major drama about whether she will or won’t jump. Friends encourage her from the sidelines, and the queue behind her definitely wishes she’d get a move on before they wuss out. They’re going to start seriously heckling soon. While I’m inside arranging for our shuttle pickup I comment to one of the guys that they’ve got a talker out there, and he says they’ve waited upto 15 minutes for people to jump before. It doesn’t take quite that long this time. The staff get bored of the theatrics and trick her into raising her arms just high enough that the railings aren’t within reach when they give her a small, but effective push. Next please! 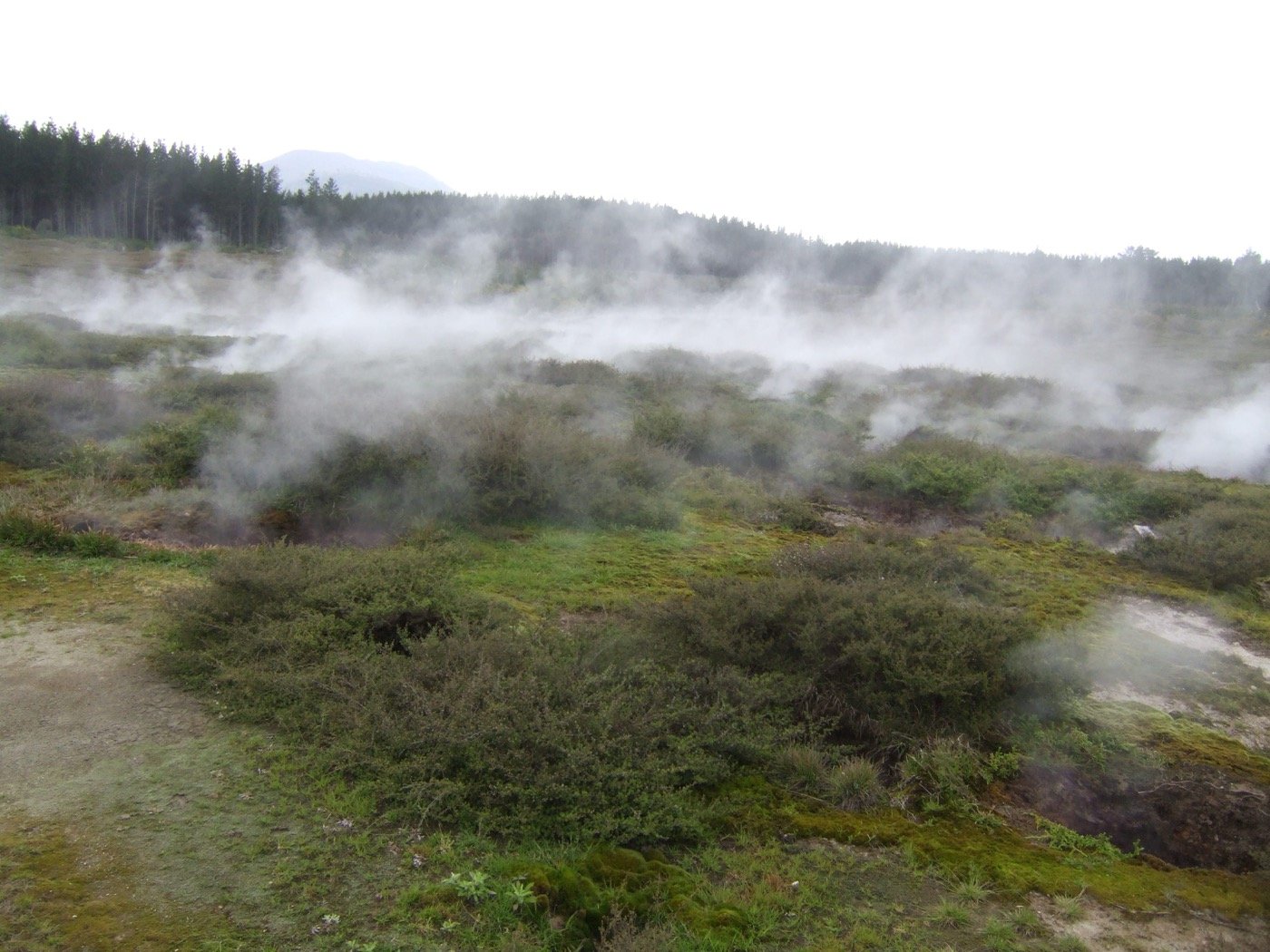 Our last stop of the day is called the Craters of the Moon. This area contains craters of boiling mud and steaming vents that give a surreal landscape to walk through. By now the light is starting to fail and it’s clear the rain wouldn’t hold off much longer. We return to our accommodation before the rain gets too heavy and reward ourselves on a successful day with a big mug of tea and enormous chocolate muffin from the bakery. The sound of more torrential rain outside makes us happy to stay where we are for the rest of the evening. There’s only one thing left for us to do to top the bungy jump and we plan to tackle that in the next couple of days!