Taupo: In search of Noah’s ark in the Hidden Valley

It didn’t take too long for the bad weather to catch up with us in Taupo. Judging by the disgust we’ve heard from every Kiwi so far, we’re privileged to be here for the worst Spring weather in recent memory. Not that we’re strangers to torrential downpours – Dublin tends to be quite waterlogged. But it’s hard to stuff enough into your rucksack to cover both the warm and cold climates. We definitely didn’t manage to fit in a canoe for this kind of rain. It’s time to accept an inevitable drenching every time we venture out. At least the bad egg smell of Rotorua isn’t following us with the rain.

The view of the lake this morning as we walked into town was a little different to the day before. It was like looking at one of those before and after photoshopped images where you have to figure out what’s different. In this case someone had removed a whole mountain range as the snow-capped mountains clearly visible yesterday were completely hidden by cloud and mist. In light of this, it was no suprise when it was confirmed that taking a day trip to Ruahepu for snowboarding this week wasn’t likely to be a viable option. 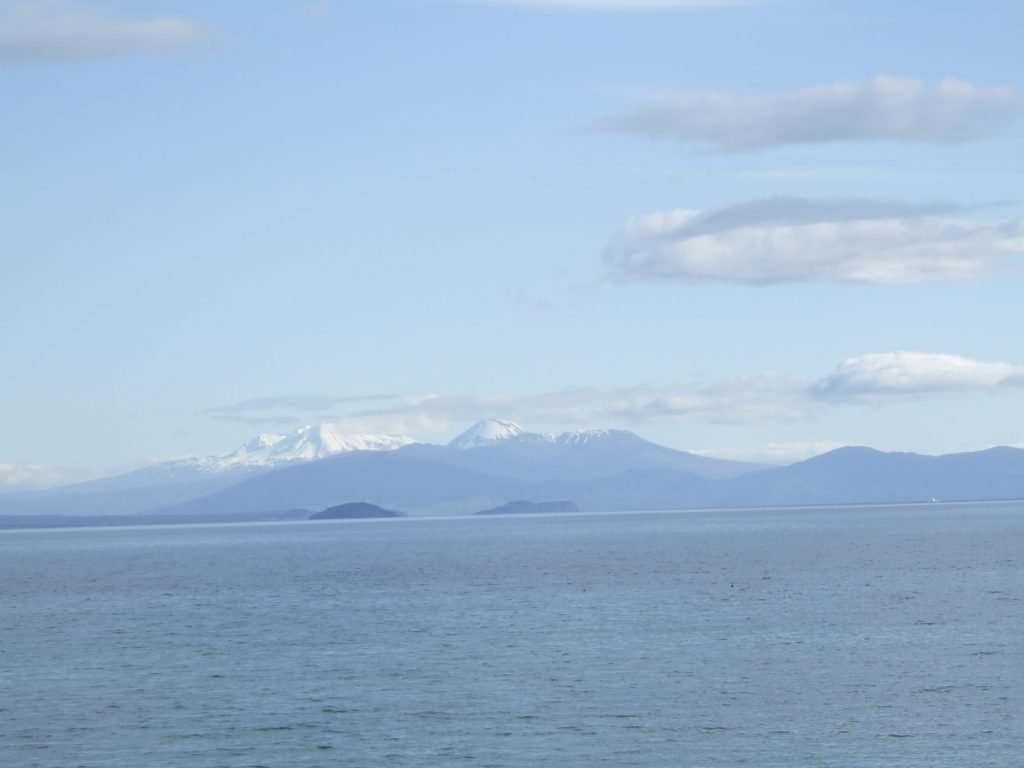 We decided to pay a visit to the Hidden Valley – Orakei Korako this afternoon despite the rain. It was recommended to me as being worth a visit by my friend Mark. Not having our own transport, I began dialling numbers from the various fliers accumulated over the last couple of days at tourist offices. Eventually I got Gus on the phone. Gus is a one-man transport provider around the Taupo area. Gus also had absolutely no interest in who I was, or any details of what we wanted. He would be at our accommodation in 30 minutes. This wasn’t sounding terribly promising, but having warned Brodie that we could be dealing with a mad man, we waited on the porch in the rain to see what would happen.

Sure enough, 30 minutes later Gus rolls in. After trying to take the van around the back of the lodge despite our clear comments that it was a cul de sac, Gus headed off confidently. Where we were going, we weren’t quite sure. Not one for chatting, Gus didn’t see a need to verify that he had got the right destination on our static-filled phonecall earlier where his eventual understanding was that I was called Peter. So we were a little worried when he pulled up into a driveway 10 minutes later and wandered off in, checking the mail as he went. Could he have heard ‘Hidden Valley’ as ‘take us to your home’?

Eventually Gus (or Gus 12 as his displayed photo id stated) returned with a few umbrellas, and without further discussion we took off in another direction. With the confidence of someone who never thought they’d get out of Eygpt in one piece on a previous holiday, I decided to enjoy the rain-soaked scenery while waiting to see what was in store. No deserts to be abandoned at in this country after all, and my mobile phone was fully charged. 20 silent and rather long minutes later we turned off on a road clearly marked Orakei Korako. Brodie finally stopped shooting me glances that implied that we were going to get murdered or mugged in the middle of nowhere and it was going to be MY fault. We returned to wondering just how soaked we were about to get.

When we pulled up to the cabin where the ferry departs, it was clear that Gus would not be accompanying us in our foolhardy date with a lot of rain. He decided we would take exactly one hour to see the area and return to meet him. Ok so. After purchasing tickets, a short ferry ride deposited us at the start of the trail we were to follow. This began a water-laden trek along the tracks to see various thermal attractions. The place was impressive despite the weather, though tough to navigate while trying to use an umbrella to keep the camera dry and avoid falling into the rivers of water flowing along what was supposed to be the track. 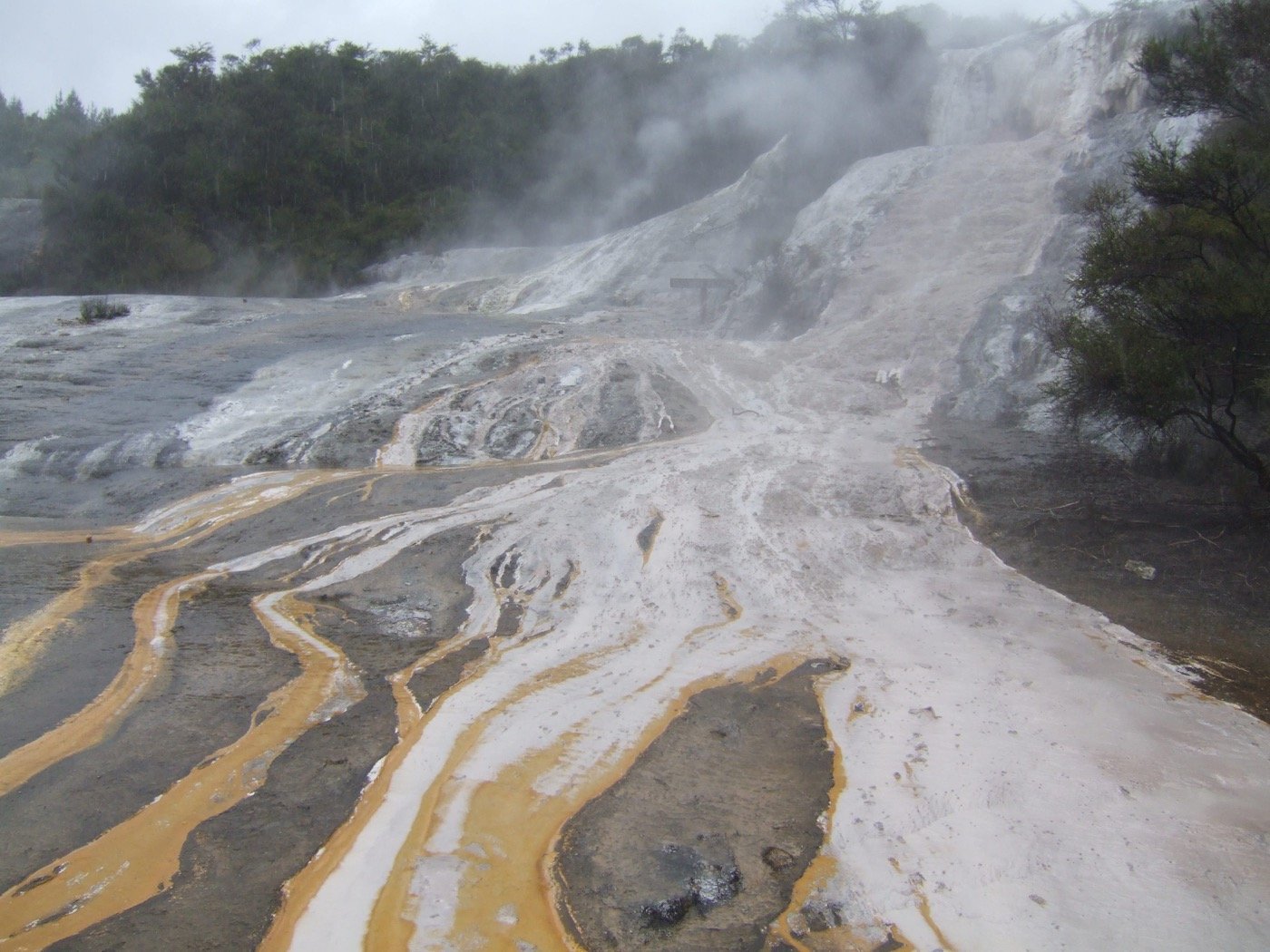 True to Gus’s prediction, we double-timed it along the track and were signalling the ferry back in less than an hour. Somehow avoiding any slips or tumbles even though our clothing was soaked through by the end. We located Gus in the cafe where Brodie eventually got his attention to indicate we were wet enough to be ready to go now, thanks. We got a brief conversation back to the bus before returning to our uncompanionable absolute silence all the way back to the lodge. A steaming jacuzzi bath did the trick in getting warmed back up and we deposited another large load of wet clothing at reception for the dryer. 12 hours hours later my phone had dried out enough for some of the buttons to work again, but it looks like most of them died somewhere out there in the rain. 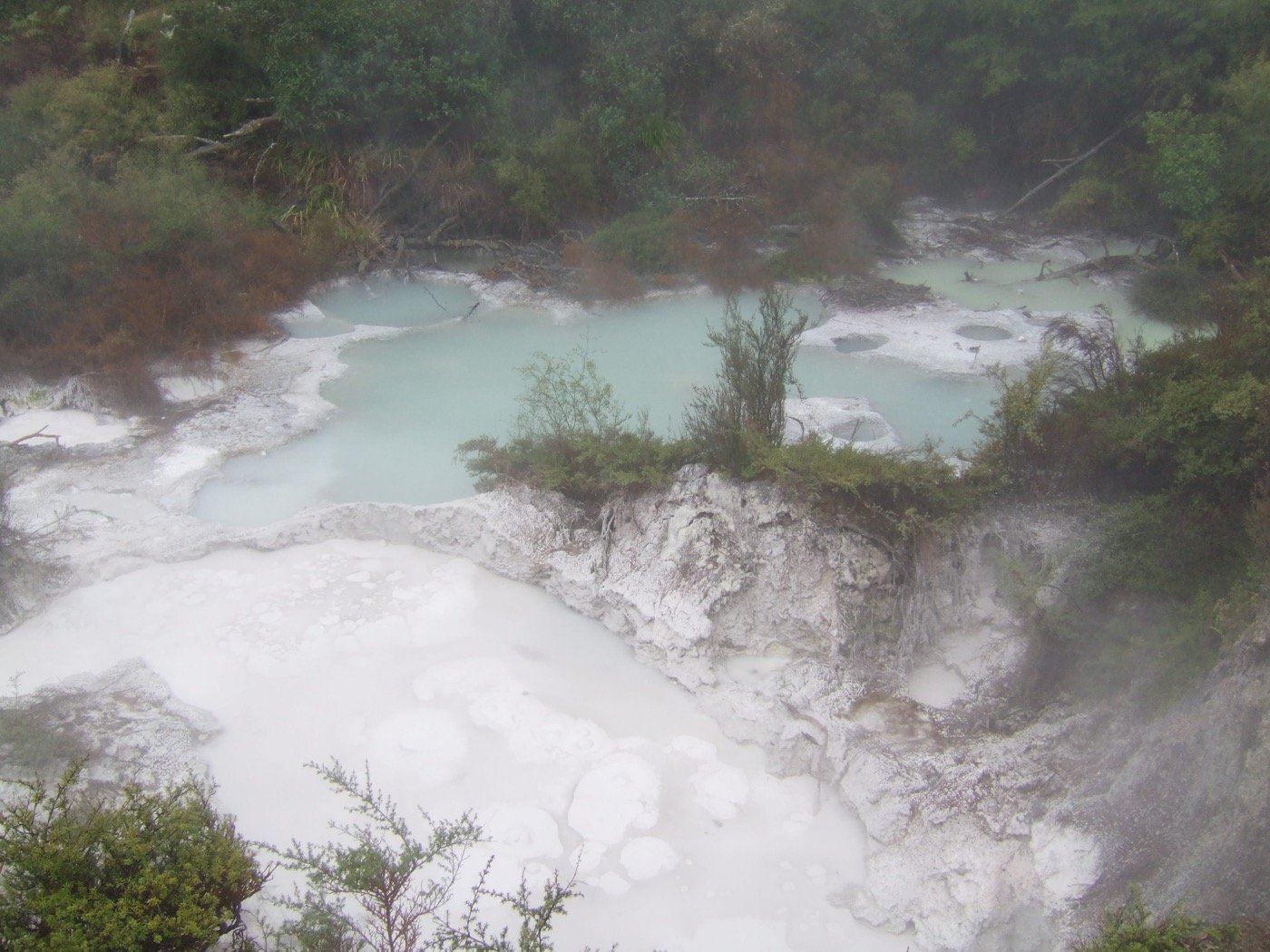 There’s so much to see at Taupo, even with the wet weather that we decided to extend our stay through to the end of the week. Stay tuned for some of the more strenuous activities that can be undertaken here.