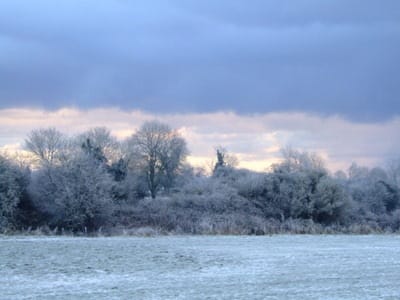 Things became somewhat surreal as the usual nine to five working day went out the door. People arrived into work in dribs and drabs, most disappearing off again at the slightest sign of more incoming snow. Every journey outside of the house was an opportunity to bear witness to someone else’s misfortune as cars revved almost all the way to the top of hills before stuttering to a stop… and slowly sliding all the way back down again. Others found their normal maneuver around a roundabout turn into making an unplanned landing on top of  it instead.That’s not even taking into account the poor pedestrians gingerly picking their way along slippery paths and meeting misfortune more often than not.

Each day Met Eireann’s forecast was a repetition of the one before. The weather was expected to last at least another 10 days. There was still no end in sight. Gradually the predictions built up to a height and there were dire warnings of two days of heavy snow storms ahead. With this in mind, we reluctantly went on a shopping expedition on a Saturday afternoon to stock up on supplies should we find ourselves housebound for the next few days. Obviously everyone else in the city seemed to be doing the same. The hordes of people and queues for everything made it seem like the Christmas shopping rush all over again. The line of cars waiting to enter the car park stretched out towards the main road and things got vicious as cars endlessly circled, waiting for an opportunity to pounce when someone else inched their way out of a parking space.

The grocery shops were no different with queues extending in every direction. Shelves were starting to look rather bare as people carted off supplies. The veneer of civilisation was starting to slip. Things can get nasty when there’s the slightest hint that the supply of food just might not meet demand. Luckily for us, we were using a super scanner as we went and had only a short wait before we could pay for our goods and get out of the mayhem. Back in the multi-storey car park cars were still stalking pedestrians, sticking so close that it was hard to cross to your car without getting run over by them. Satisfied that we wouldn’t have to repeat this ordeal for at least another week, we fled the scenes of desperation and went home to fill our shelves with what we’d bought. Fully prepared, we settled back and waited for the weather to bring its worst, as promised.

So of course the following day dawned brighter and clearer. Rather than flurries of snow, it was rain-bearing clouds that finally came rolling across the skies.  The rain steadily set to the task of washing away the icy residue. Instead of the drifts of snow we were expecting, within 24 hours the roads were swept clear and it was as if snow and ice had never existed mere hours before. The ice age was over, things were quickly getting back to normal across the country. All that was left was a lingering sense of just how bad things might get should an apocalyptic scenario really occur. Perhaps it’s time to stock up on canned goods and petrol.  Those paranoid people with bomb shelters and huge food stores just might be on to something…