This, is Ile de Ré 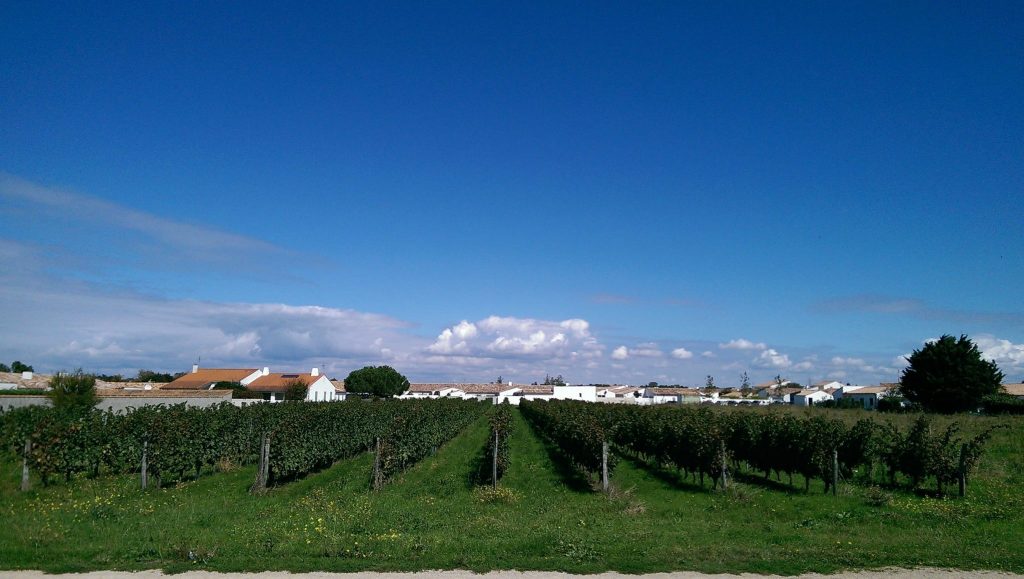 I’m hurtling along on a rickety bike, out in the peaceful open countryside. Coasting easily through flat fields, the grass gently waving in a fresh breeze that takes the worst of the heat out of the sun. Airplanes trail a criss-cross pattern across clear blue skies. Air rushes past as we climb up gentle slopes, and speed easily back down the other side. We travel in a companionable convoy. Only the snickety-snick of wheels turning, an occasional jangle as bike encounters rut or bump. A clank as gears change, signalling an incline that is just steep and long enough to remind us of how much more strenuous cycling can usually be. Not here though, as we race along dedicated tracks beside the roads, smugly watching cars chug past. Cars that unexpectedly give right of way to any wobbling cyclists that invade their road. A far cry from battling through crowded city streets in fear for your life. Here, the bike reigns supreme on the road. On we go, just our little posse. Headed nowhere in particular. Travelling at our own pace with no set schedule. Often we have only a vague sense of what lies in each direction. But on a small island there’s a limit to how lost you can possibly get. It’s a special kind of freedom travelling under your own steam, through picturesque landscapes of tranquility. But our responsibility follows us around too. A brightly coloured ‘carriage’ attached to the rear keeps precious little cargo safely away from the glare of the midday sun. A face peers inquisitively out at the passing scenery. Later in the day he stretches back in comfort on a bed of bags and jumpers, happy to let bigger legs do the work while he dozes. Periodically our convoy crosses paths with another group of cyclists. Each headed off on their own kind of adventure. There are grins as they pass us by and hear a high-pitched crooning coming from within the carriage. An enthusiastic rendition of “Let’s go fly a kite, up to the highest heights…”, on endless repeat, accompanies much of our travel – indicating a content toddler within. Those passing by with their own carriages rolling behind, slow slightly as the occupants take the opportunity to peer curiously across at each other. A fleeting glimpse of other little faces speaking strange languages. The scenery around us is in constant flux. Along the coast, dark rocky shores look out on ocean waters filled with pleasure craft sailing between island and mainland. Further along they give way to calm sandy beaches, where you can while away the hours with the soothing hum of waves in the background. Quaint villages with carbon copy buildings. Egg-white walls. Big wooden shutters in a restricted palette of any shade between deep green and pale turquoise. Farmers markets do a busy trade in all manner of fruit, vegetables and rotisserie meat. Boulangeries are not difficult to find. Coffee and fresh crusty croissants are in abundance here. And of course icecream. The preferred fuel of all holiday cyclists. Then, from bumpy village streets, the terrain changes to country fields and coastal routes. To smooth roads that purposefully connect the handful of villages. Cycle paths wend their way off the beaten track. Stream of cyclists head out in all directions along them. The less fit holidaymakers huffing and puffing, while the elite athletes overtake them in their designer sportswear, impatiently ringing their bell to clear the path ahead of them as they race at high speed. Leaving everyone else behind in their dust. Literally. Those wheels kick up a lot of it. Fields of vegetables bloom – plump and bursting with colour. Cool leafy woods. Vineyards with row upon row of bruised purple grapes hanging precariously off the vines. It’s a literal advertisement for fresh and healthy living off the land. Other paths meander through oyster farms, bringing a less than savoury stench to our nostrils. The heat is more oppressive here. It beats down relentlessly without the respite of the wooded patches. Towards the end of the day it’s time to head towards the nearest village. At the thought, legs pump a little faster up inclines, racing towards the promise of dinner in one of the bustling restaurants locked within the strong stone walls. Down by the port we wander through streets comparing menus. Fresh fish and mussels are always available. But you can also indulge in pizza or burgers if the decadent icecream parlours haven’t already enticed you into using up your daily quota of unhealthy calories. The restaurants are busy – the service a little slow at times, but always friendly. The food is fresh and good. There’s time to sit and people-watch for a spell. Crack open a gooey chocolate fondant dessert. The sun slowly crawls low towards the sea. Then it’s back to the breezy paths that hug the coastline. Frisky blue waters race by our side. A golden sun casts all shades of pink and purple into the sky as it slowly sinks on the horizon. A sky that without fail provides a brand new watercolour canvas each evening as the clouds roll in and cast new hues. It’s tempting to stop and stare, but it’s getting late. Moving faster along quieter paths now, inland and back across to the far side of the island. Anxious to beat the incoming darkness that chases at our heels – you can feel the nip in the evening air. Like nocturnal creatures, the cyclists have all gone home for the night.

Ahead, a church spire rises majestically into the sky – a welcome landmark indicating that the end of the journey is nigh. Beds await us nearby. The end of another day of island living. Slowly traveling about, purely for the pleasure of the journey. This, is Ile de Ré.