“Where’s the buggy?” and other adventures with a toddler in Dungarvan

Like many people, we’ve done quite a bit of travelling abroad but have been lazy about visiting all the best parts of the country we actually live in.  We keep meaning to stay home, but the lack of consistent weather makes it a risky prospect.  There’s also the desire to travel further afield while it’s more convenient and cost effective.  Travelling as a couple is definitely a lot easier than travelling with an infant, which is much cheaper than travelling with one or more 2+ year old children.  The closer to home the better for us at the moment with a clingy toddler that doesn’t do well with disruptions to his daily nap.  However staying at home indefinitely isn’t much fun for the adults in the house.  We were happy to pick up a great deal with Supervalu breaks for a three night stay in Dungarvan at the start of March this year.  Due to family connections we typically don’t stray further south than Wexford, but I’ve heard good things about the Waterford coast and Dungarvan in particular.

It’s only about a 2 hour journey from Dublin (or 3.5 with diversions, because the adults miscommunicate resulting in an exhausted toddler too tired to eat, too hungry to sleep).  March is not the optimal time for vacations in Ireland.  Snow was falling in Dublin as we sped along the motorway heading south through a black deluge of rain.  It wasn’t looking very positive for the weather so far.  Water pelted the windscreen, obscuring any lush green countryside we were passing through.  However, just as the bridge over the river Suir loomed ahead of us, the sun broke through the clouds and the rain faded away – leaving a chilly, but bright and freshly washed day before us.  The Rascal finally snored in the back of the car.  We pulled in to a petrol station and obtained a massive croissant that was sure to console him when we arrived and had to wake him from a very brief nap.  The other half also managed to pick up a couple of calorie-tastic muffins to boost our sugar levels after dealing with the rear seat whinging and crying for half the journey. A few short minutes later we pulled up at the Park Hotel, still brushing muffin crumbs from our clothing.  Check-in was quick and simple.  The hotel was packed to the gills on a Sunday afternoon, but was due to quieten down in the next few hours.  We had a family room on the first floor with a double and single bed.  These were easily pushed together to give us a super duper king size bed.  With an adult on each side, the Rascal wouldn’t require the barricade of cushions usually needed if I have to share a double bed with him.  I had been a bit worried the quality of the hotel might not be great with the deal we were getting, but there were no complaints from us about anything in the room.  Well, apart from the obligatory mini kettle that sounds like its powered by a single battery.  Minor issue, at least they had a kettle!  The hotel is situated on the banks of the river with nice views across it.  It’s only a short walk into Dungarvan town, or down the road to the playground.  The hotel itself has a restaurant/bar and a leisure centre so there’s plenty to do with kids without going very far. We had a dinner included in our deal and thought we’d use it on the first night as typically we find hotel meals aren’t as good as eating out on holidays.  This time however, we were pleasantly surprised to have our best meal of the trip served in the hotel bar.  We had wonderful steak and chips with pepper sauce followed by cake, while the Rascal got fruit, chicken (chips he won’t eat) and a massive bowl of icecream we had to assist him with for fear he’d  be racing around the hotel high on sugar for the next 28 hours.  Service was a little haphazard, but the food was delicious.  We found the breakfast options were great for us too.  A hearty bowl of porridge is our usual start to the day, so it was nice to get a decent serving that wasn’t all watery.  A cooked breakfast could be ordered and there was a self-service buffet with the usual choices.  Aside from having to negotiate with the Rascal about how the super duper big bed would be divied up, it was a great place to stay.

So what to do with a toddler in Dungarvan?  The internet offered lots of suggestions, including Learner Mama‘s tips from their family holiday.

In order to respect the golden daily nap, we could really only get out to one place each day.  So we only did a little of what we could have on a three day break.  The first option is to explore Dungarvan itself.  You can take pleasant strolls down along the river admiring the scenery. There’s the convenience of shopping centres and the old reliables of Lidl and Aldi.  The town has lots of places to stop off for coffee and cake when you want a rest.  There was much croissant-eating by the Rascal, who loves the opportunity to sit in a bustling cafe and people-watch.  The hotel facilities were good too.  We didn’t use the gym or sauna, but the swimming pool had been a prerequisite for choosing the hotel.  It was a great opportunity to give the Rascal some swimming time without the hassle of going to crowded pool at home.  The staff were friendly, though there was that one older lady who tattled to me that my husband had refused her offer of armbands for our son.  She was quite horrified that I didn’t storm off to lecture him about safety.  She didn’t seem to have heard of Waterbabies.  Definitely not impressed with us as parents.   But that didn’t stop us from continuing to use the swimming pool and the playground nearby to fill in the post-nap time before dinner.  It was convenient to have so much to do right beside us. We could easily have spent a couple of days relaxing and doing nothing else but use the local amenities. 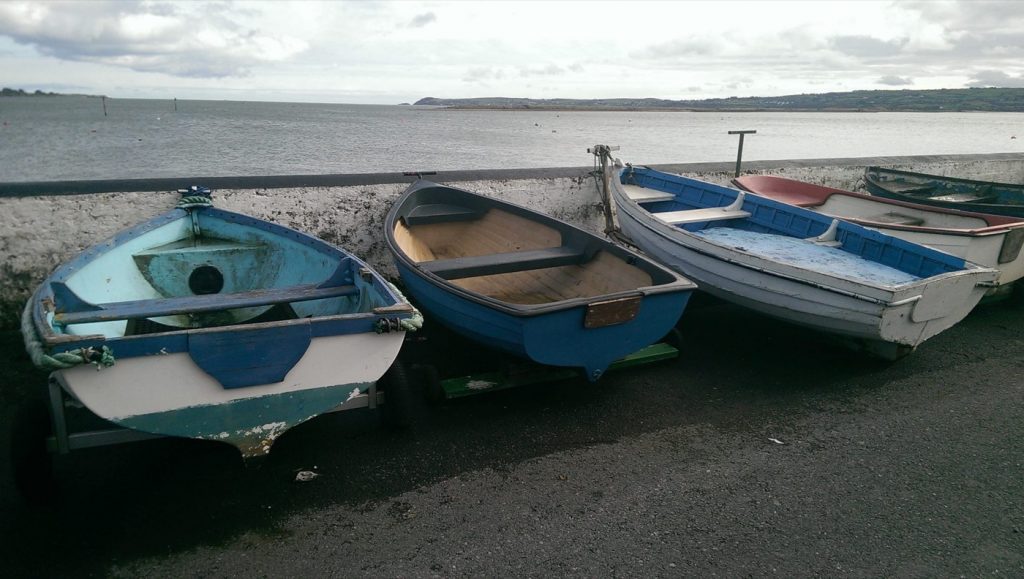 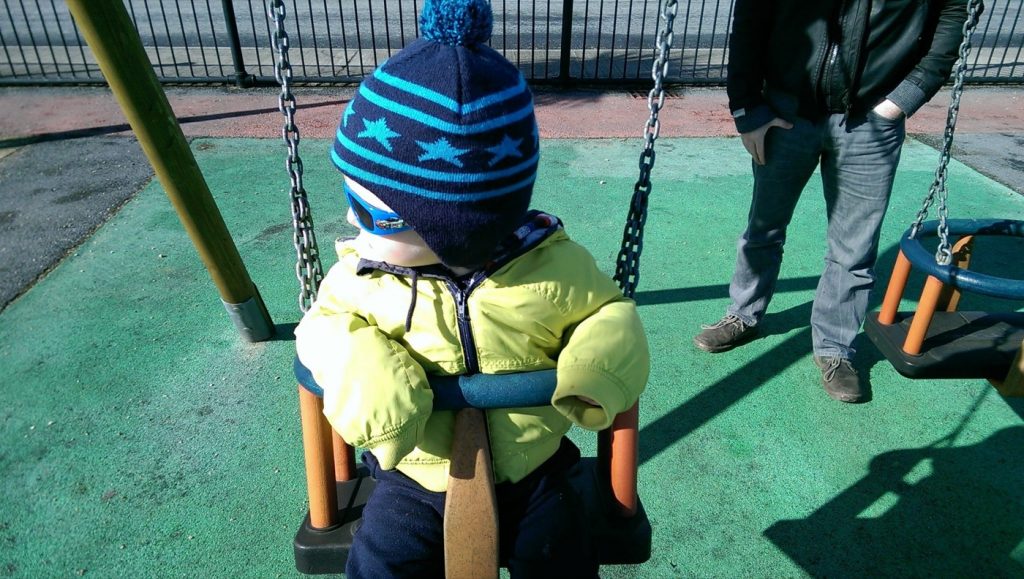 Wind in my hair

We took a scenic drive along the coastal route (when we could find it) from Dungarvan to Tramore.  There are some beautiful spots along the way.  Our first stop was Clonea Strand which was almost deserted.  There was a stiff breeze, but we were well wrapped up and the sun sparkling on the water was spectacular.  The Rascal loved it, jumping in puddles of water and examining seashells.  Typically he exhausted himself and conked out as soon as we got back in the car.  He missed the winding roads, and stopping off to admire the green cliffs and frothy blue waters.  We eventually arrived in Tramore which is your typical seaside holiday town you can find around Ireland.  Piles of brightly coloured metal lay about waiting to be constructed into fairground attractions for the summer tourists.  We struggled up the hills to get a nice lunch, then went for a stroll along the promenade and stocked up the caffeine tank before returning back to the hotel.  It was a nice way to spend half a day. 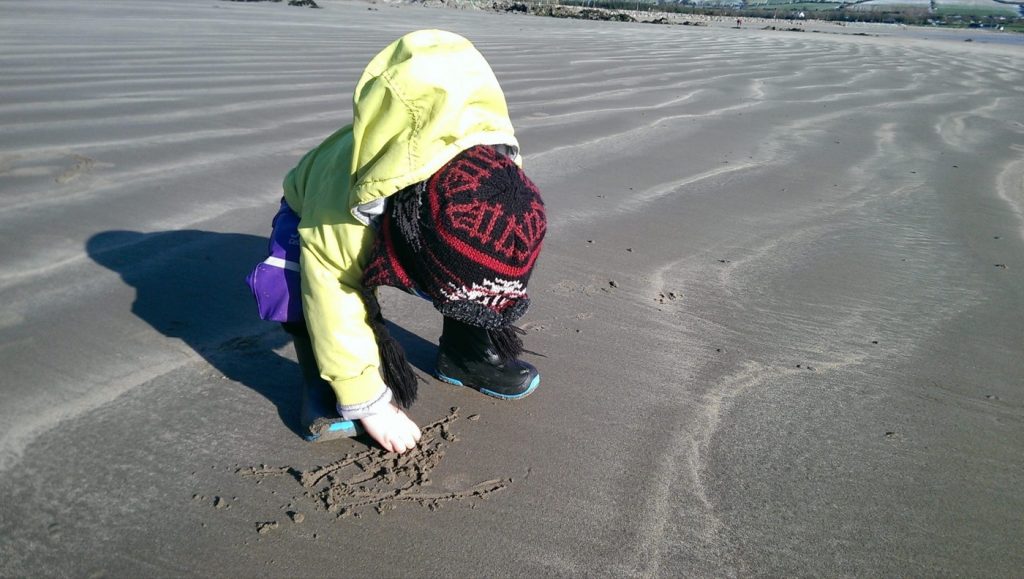 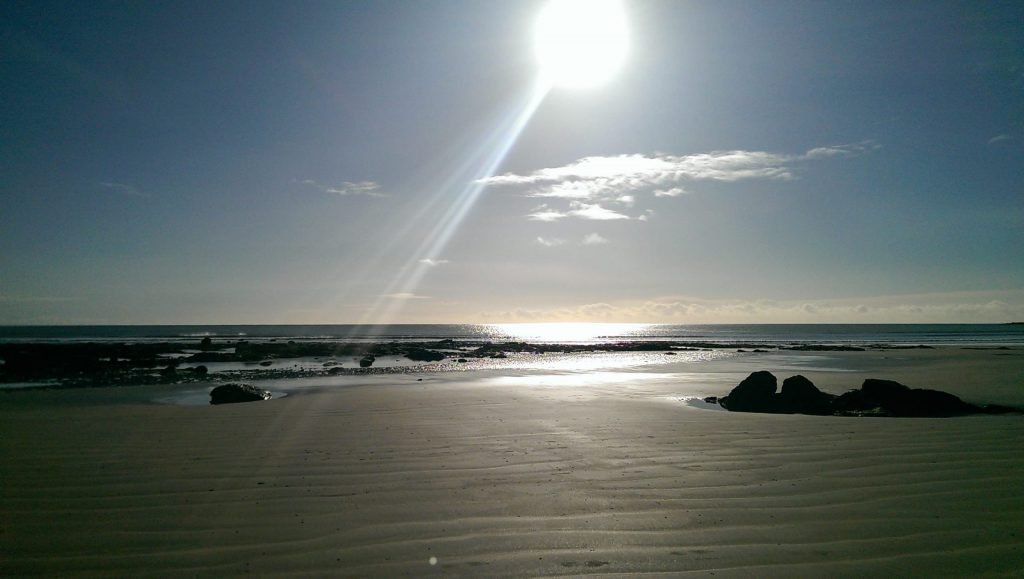 We drove out to Colligan woods for a bit of fresh air and exercise.  It’s close by, and offers a couple of trails up through the forest.  However our adventure almost ended abruptly in the car park.  I was busy locating various items of rain and wind gear in the back of the car for a few minutes.  My husband got out and was pottering about, so I was surprised to find he hadn’t taken the buggy out yet when I met him at the back of the car with the Rascal.  When he turned to me and asked, “Where’s the buggy?”, I thought he’d lost his mind.  “In the boot, of course”, I said.  This is the battered and worn buggy that no longer has a working brake on it.  You can probably figure out what had happened based on that.  We looked at each other for a couple of seconds, realisation dawning, then turned to survey the area around us.  We eventually spotted a lonely buggy further down a slope, in a big puddle, at the side of the road.  It was quickly retrieved before a) becoming road kill or b) anyone spotting it and passing judgement on our parenting abilities. 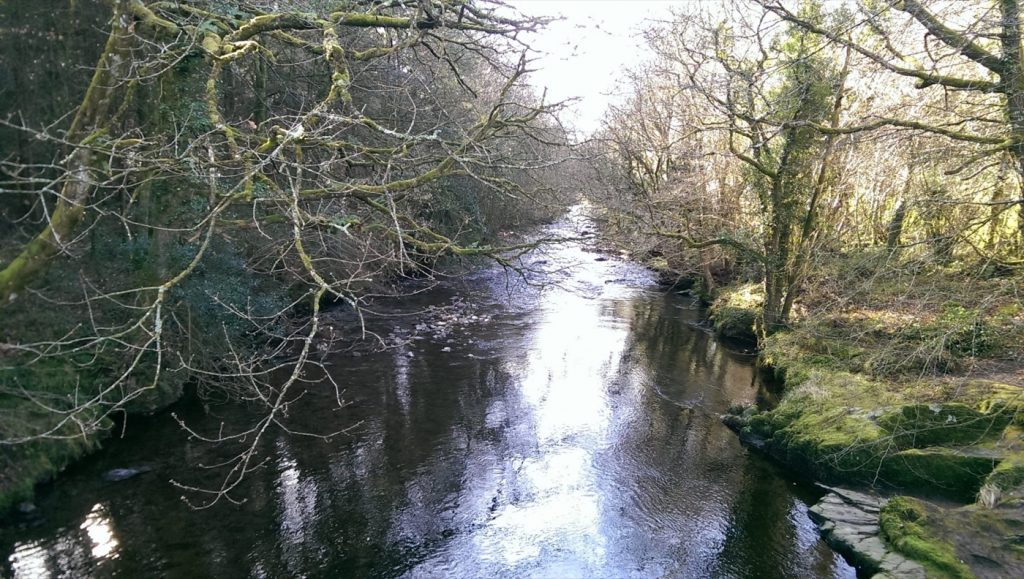 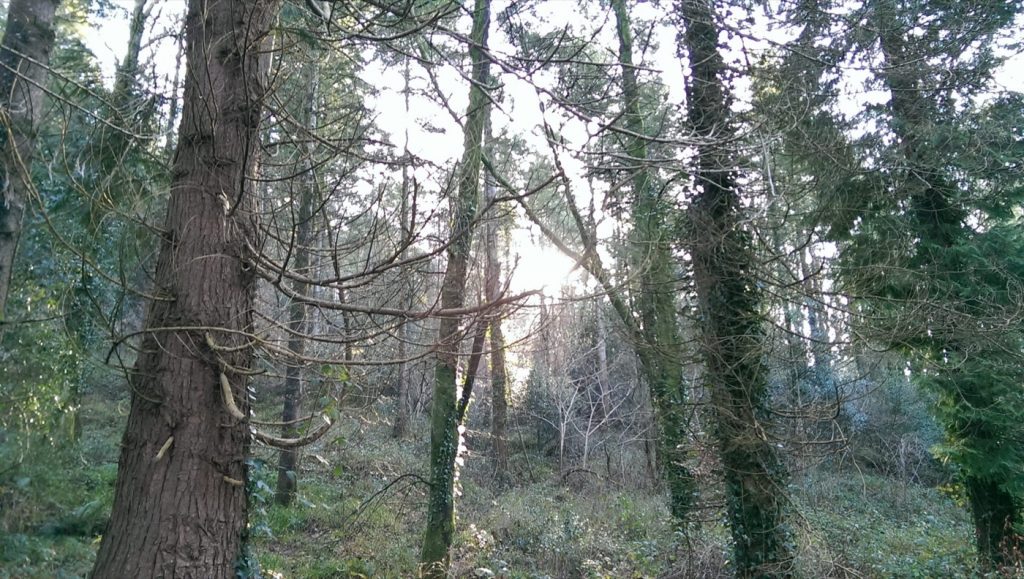 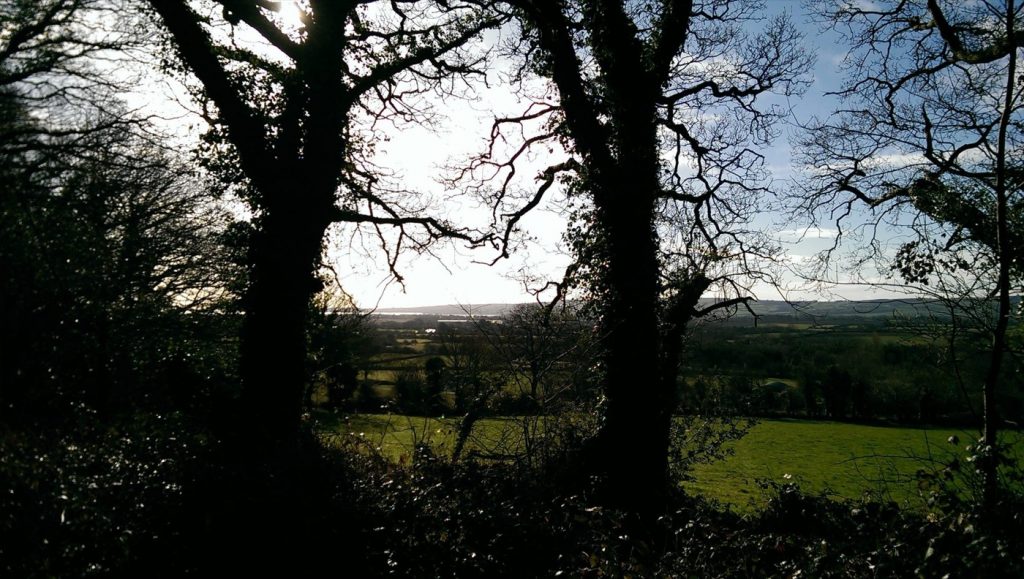 Disaster narrowly averted, we set off on the shorter trail up through the woods.  The Rascal bumped along in the buggy as he was a bit tired, and I was definitely not volunteering to carry him in the sling up steep terrain.  Up we went along the trail and back around.  A good bit of exercise  with lovely views, and a great way to tire out any rambunctious children.

On our way back to Dublin we thought we’d check out the Mahon Falls and let the Rascal have a runabout before the car journey home.  The day didn’t start too well as the Rascal was up at stupid o’clock.  Then a combination of road signs pointing in the wrong direction and google map’s complete incompetence outside of larger cities, meant we took the most roundabout route EVER before finally arriving at what we assumed must be a car park.  Of course the Rascal had fallen asleep again by now.  Of course he was a bit miffed at us for stopping after he’d nodded off.  OF COURSE the path was too waterlogged for us to make it more than 500 metres down the trail after all that.  We saw some nice sheep though, and a nice sweeping view down to the coastline.  We settled for peering at the actual waterfall itself from a distance.  Then returned to the main road to find we’d accidentally missed the place we wanted to stop at for food and petrol.  This necessitated an unplanned visit to Waterford itself where we were consoled by an excellent lunch in the Granary. 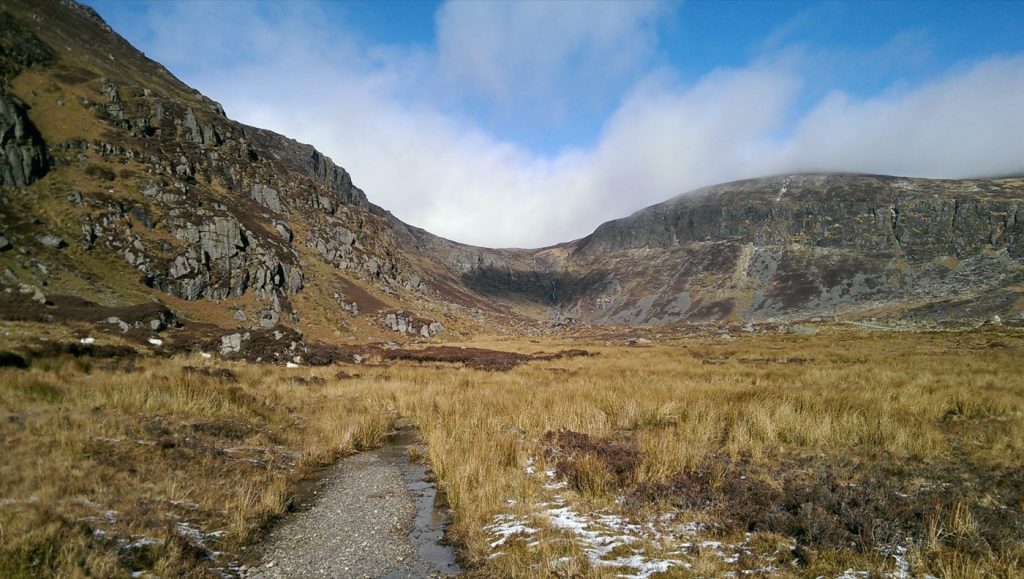 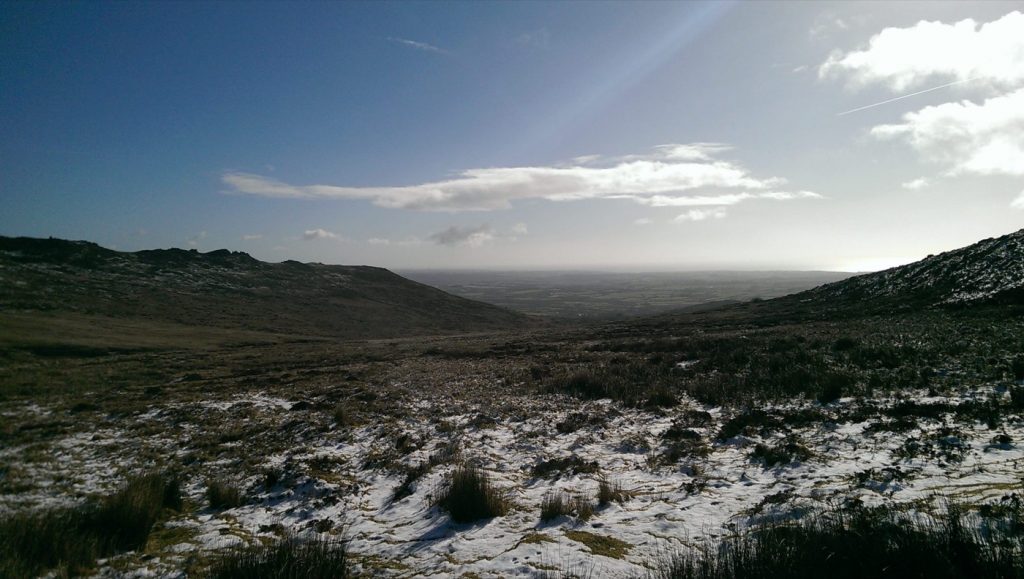 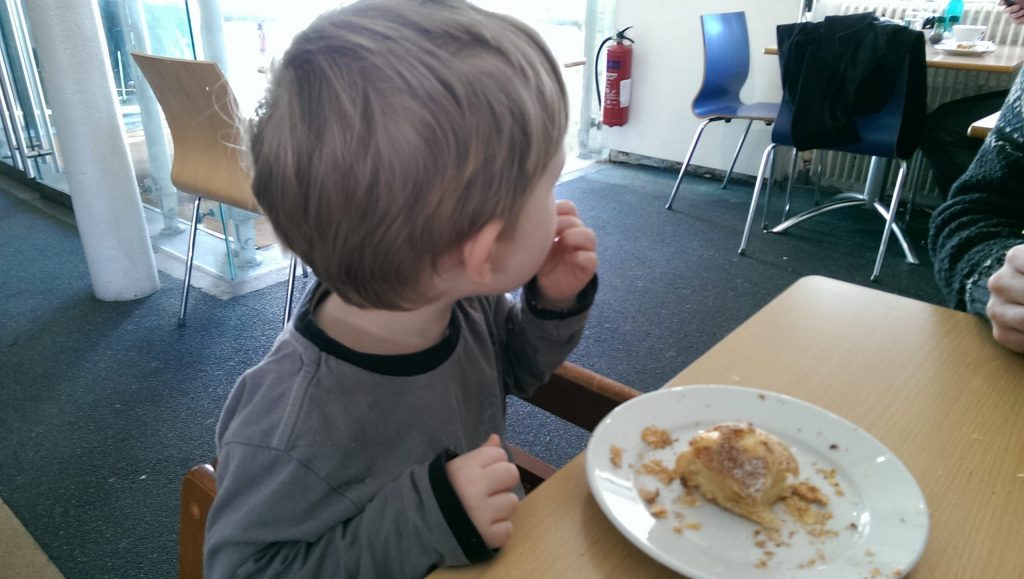 That which we didn’t do

There were plenty of other things we didn’t get to do due to time constraints and the time of year.  For example, we would have loved to visit one of the open farms in the area.  They have a variety of animals, playgrounds and all kinds of activities that would keep older children occupied for a really long time.  The Waterford & Suir Valley Railway was also out of action until the summer months.  The good choice of restaurants and activities coupled with the beautiful outdoors means there are plenty of options for spending your time in Dungarvan.  It’s definitely on our list for returning again.  Preferably when it’s a bit closer to the summer season and more amenities are open.  If that’s not enough to convince you to visit – check out these images of Dungarvan.