Toilet training adventures: And this one is dedicated to…

January 11, 2016 0 Comments
Do you ever find yourself in the middle of a conversation with your child that is perfectly normal and logical in your house, but would make you sound totally bonkers to anyone else?
“I have a poop”, says my 3 year old. One of my least favourite phrases to hear, but obviously a massive improvement on “I did a poop in my pants”. So off we go to the bathroom where I assist in pulling down clothes and that awkward mount onto a toilet seat reducer. My job is to make sure nothing accidentally escapes the toilet while the hard work is being done. Perched awkwardly on the seat, clutching a car or animal in each hand, my 3 year old pronounces through gritted teeth that “this one’s for Lightning McQueen”. “Ok,” I say. “And this one’s for Mater… And another for Colonel Hathi”. Serious eyes regard me, making sure I’m taking note of exactly what has been assigned where. I carefully repeat back the instructions. Then suddenly I find myself imagining what this would sound like to a stranger, and how we ended up here.
We haven’t taken the conventional toilet training route in our house. The ‘toilet training’ began early when the potty was first introduced to our son at around 5 months. It wasn’t long before virtually all of his bowel movements went straight to a potty or toilet. He would pee in the toilet, but only if it was instigated by an adult. He was happy to announce that he needed to poop, but no chance of him announcing a pee. Having tackled the worst part of using nappies, he was left to progress at his own pace with the rest. If it hadn’t been the end of summer I might have encouraged him more, but who needs any extra hassle during the long dark winter months? We continued using a combination of nappies and toilets which worked well. Apart from a total regression as the terrible twos hit where he absolutely insisted on doing everything in his nappy just because. That, thankfully, didn’t last for too long. It was a nasty shock to go back to the foul dirty nappies.
And then suddenly he decided almost overnight to ditch the nappy. He’s amenable to wearing a pull-up at night, though he’ll insist on getting up to pee in the early hours of the morning anyway. So we have toilet training more or less accomplished with little fuss. There’s just a few rather odd concessions that we’ve made along the way to get here…. It all began with a red car called Lightning McQueen. We didn’t intentionally let him into our house, but he was emblazoned across the chest of a hand-me-down top from a friend. A top that we had difficulty removing from our toddler long enough to wash. It was only a matter of time before he realised that Lightning McQueen was out there in the world everywhere. The first sighting was in a book store. He proudly exited the store clutching the Cars 2 story. That book, sadly, did not survive being brought everywhere for long as Daddy drove off leaving it on top of the car one day. A traumatic experience for all involved. But there were plenty more toys and books to replace it.

Anyway, toilet training had been child-led and progressed very well up to the point where our 2.5 year old would pee in the toilet and poop in the potty. Part of the progress was due to the bright red Lightning McQueen toilet seat reducer, and an offhand suggestion one day that the great Lightning McQueen himself runs on ‘petrol pee’. Obviously frequent deposits are required to keep Lightning McQueen in sufficient fuel for races. This idea caught our fire in out toddler’s imagination, and 6 months later he still announces loudly that he needs to do a ‘petrol pee’ regardless of where we are, or who might be listening. But he was adamant that he wouldn’t poop in the toilet. Not even for Lightning McQueen. No petrol poops. Those were still destined for the potty.

Eventually we got past the plateau and he now wears Lightning McQueen or Spiderman underpants (courtesy of Penneys) and produces ‘petrol pee and poop’ for Lightning Mc Queen and his pals. This notion really appeals to him and on some days the entire cast of ‘Jungle Book’ will also be beneficiaries. You really never know what things you say will stick in your toddler’s head. For better or worse, it looks like these weird ‘dedication ceremonies’ are going to be a part of everyday conversation for some time yet.

This one’s for… EVERYTHING! 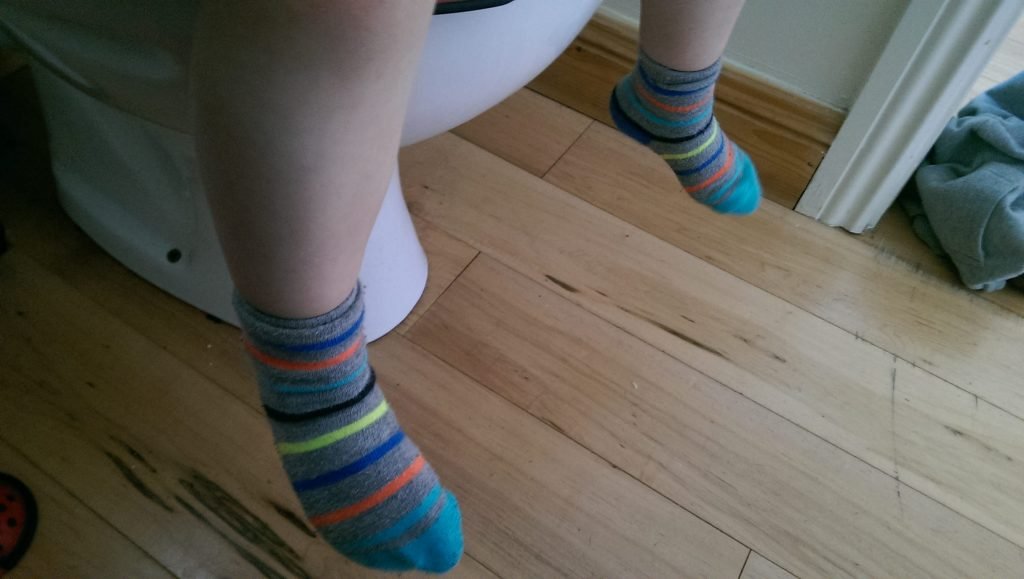 Not that this is a particularly bad thing. I’ve heard of much worse rituals around toilet training children. If it works, don’t knock it. Just expect a lot of strange looks when you’re out in public…