The second in a short series of posts about my experiences with the Irish property market over the past few years. I continue with a look at the unscrupulous tenants out there, hope that you never have to deal with one…

Landlords beware! When it comes to the law regarding tenancies in Ireland, it is all firmly on the side of the tenant. This makes sense if you approach the situation with the assumption that landlords are, by definition, so well off in comparison to their tenants, that they can afford to bear the brunt of any financial burden. This was probably the case when the laws were written. Not so anymore. Being a landlord isn’t necessarily all that profitable, especially if you’re unlucky when it comes to the tenants in your house. If you’re a reluctant landlord you’re probably losing money on a monthly basis when you factor in all the hidden costs. It’s worrying that the law is so skewed in favour of tenants that landlords effectively have no real rights at all. If you take a look at just a few examples of disputes between landlords and tenants it’s clear just how precarious the situation is for a landlord if their tenants aren’t acting in good faith.

Of course it’s all fine if you have a decent landlord and tenant who don’t disagree about much. And there are still many situations where a law-abiding tenant gets stuck with a disagreeable landlord. But ultimately, no matter how awful a landlord is, a tenant always has the choice to walk away. Admittedly a tenant first has to find somewhere else to go, but they do have the option. A landlord who finds themselves with a tenant that won’t vacate the property and won’t pay any rent doesn’t have any kind of choice at all within the law. Other than begging the tenant to leave (with rent, bills and possibly damages left unpaid), the landlord faces a lengthy, costly, and stressful battle before the law will ultimately rule in their favour and allow for removal of the problematic tenant.

The house we’re in (for at least another week) was last occupied by a family who stopped paying rent when times were hard, but wouldn’t leave. Conversation with the letting agent revealed that it took about a year with zero rental income before they could be legally evicted. And they left the house in a complete state. We found this out because the cleaning service that was promised before we would move in didn’t happen. With a just-crawling toddler on the loose it was a necessity to do all that cleaning rather than wait on arguing it with the letting agency. The walls had been painted and the floors replaced before the house was put back up for rent, but we ended up scrubbing the grime and dirt from every kitchen and bathroom surface, every cupboard and wardrobe, before we could place any of our belongings in the house. This was particularly annoying as I’d spent a week cleaning the house we’d just left so well that our landlady was literally skipping about in happiness at the condition it was returned in.

Because we follow the conditions of the rental lease, we usually leave a house in better condition than we received it. Otherwise we risk losing some or all of our security deposit. Once you’re dealing with a tenant that withholds rent, they have absolutely no motivation to do anything they couldn’t be bothered with doing before leaving. It’s very common for tenants to just leave suddenly without telling their landlord. Eventually the landlord will have to break in to the house. But not without jumping through hoops, because shame on you for breaking in to a house you own that appears vacant and hasn’t been paid for in months. And the landlord is legally obliged to hold any belongings left behind for a length of time because technically the house has not been officially vacated. Just because the tenant hasn’t been paying rent and has disappeared, doesn’t absolve the landlord of their duties according to the law. As I mentioned, we took the PRTB mediation route when our tenant stopped paying rent and was disinclined to vacate our property. The tenant reluctantly engaged in some discussions with the mediator. Mostly focusing on how put out he was by only getting several months notice that he should find a new house to live in. Eventually we heard that he would not be paying any rent arrears and expected to move out on the Friday of the following week. This was not the first ‘moving out’ date he had given us, but we hoped it might be the last. It suited him to hand back keys at 1pm on the Saturday. We could either accept those terms or the mediation was over. We didn’t even get the choice to accept though, because the tenant then stopped responding to any communication from anyone.

No answer to calls from the mediator or any letting agent. No response to texts or emails from me. Absolute refusal to confirm he was leaving, or if he planned to give back the keys at all. We’re not talking about a difficult person here, or some kind of unfortunate misunderstandings. We’re talking about a person who has actively chosen to be spiteful and go out of their way to make life difficult and miserable for us. All because it’s inconvenient for him to move house and start paying market rate. He doesn’t acknowledge that we’ve tried to be as accommodating as possible. Because how dare anyone consider their needs at all if it goes against what suits him? Why would we be entitled to want to move back into our own house when his family would like to stay there? We should be able to drop and change our plans at no notice to accommodate what he wants. Anything less, and we’re being terrible people. We didn’t choose to let the house to this particular person. We paid a letting agent to vet tenants and choose ‘a good one’. Hah! However you can never be sure about letting someone into your house when you have no legal means of checking their rental history. The PRTB won’t tell you anything. Asking for a reference from a previous landlord doesn’t work as they can omit ones they’ve had bad blood with, or choose a current landlord that is desperate to get rid of them. It’s really a leap of faith. Not only can you not properly vet a potential tenant, you have no recourse if they screw you over. The PRTB won’t give you any assistance on chasing a tenant that has already left your property. They’re free to move on to some other sucker landlord, and you won’t be given a postal address to send a bill to them.

So we’ve waited and waited for this to play out the the bitter end. Starting a full legal dispute is such a massive cost in time and money that it’s not something you want to do without exhausting any other possibility. Our last best hope has been for the tenant to run away to scam a new landlord and leave us to figure it out. Off out we went to ‘inspect’ the house, with toddler in tow, praying it would be obviously vacated. Maybe the house would be empty. Maybe it wouldn’t. Maybe it would be destroyed before they left. Maybe we’d be able to break in and regain possession of the house. Maybe we would be racing next week to complete a move to the other side of the county in a very short time. Maybe we’d be starting a lengthy legal process, living with others indefinitely, paying for our furniture to sit in storage somewhere. Because god forbid our tenant would spare us any hassle whatsoever.

I had texted and emailed that we were coming over at the time the tenant requested, but had received no response. We arrived an hour early to have a look and were relieved to see signs of activity that gave the impression they might actually be leaving. We retreated for a coffee, then came back. At this point we just wanted the keys, and for them to be gone. The tenant was still trying to play that ‘oh woe is me, I’m a stellar guy and you’ve been horrible to me and my family”. Complained at how he and his pregnant wife were ‘harassed’ by having the mediator ringing regularly trying to get an update on their plans. He mentioned that the gas had been disconnected ‘by accident’, but he was sorting this out on his own account. Uhuh, and that’s a flying pig over there. Needless to say, he’d been paying no utility bills at all for the last while, leaving us to contact the suppliers, and face the reconnection fee. 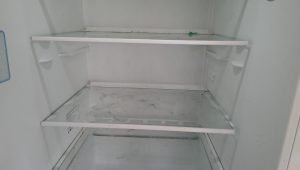 A grimy fridge of bad smells 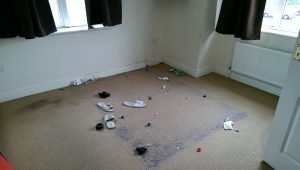 Whatever you do, don’t look under the bed 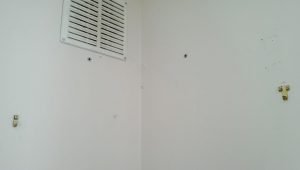 Holes on every surface

The house was left… well, not in a very liveable state. It also hadn’t been cleaned much in the last few months (at least). Not a wall or surface that hadn’t been pocked hole from hooks and fittings. The dirt and grime in some places suggested they’d never actually been cleaned at all. The garden was in a sorry state. Any furniture remaining looked contaminated by god knows what. And the junk. Here, there, everywhere. We took a quick look, then requested an extra couple of weeks from our landlord to try and make a dent in the mountain of work that needs to be done. As painful as that will be, we’re very lucky that our unscrupulous tenant is gone and we can start repairing and moving on. The sense of relief that we have finally made some progress is immense.

We left our house primarily due to problems with its location. After almost four years of renting ourselves, I have to say it’s so nice to walk around a house (albeit a worn-out, stinky and stained version of what we once knew) and know we don’t need to seek permission to make minor changes. We don’t know exactly how long this house will be our home for again, but at least we can make it into a home for that time. Just as soon as I’ve scrubbed the remainder of our unscrupulous tenants off of every surface.