The last city in our Canadian travels was Vancouver. This was really just a short stopover.  Originally we’d planned to spend a couple of days here, but ended up allocating more time to Niagara Falls to meet with friends. From what I’d heard of Vancouver, I thought that we would probably enjoy Montreal and Toronto more anyhow, but after a long 6 hour flight from Toronto we were glad to get out of the skies for a break.

Vancouver is over on the west coast of Canada and feels quite different from the rest of our trip through Canada. Flying over the city you can see a vast expanse of city stretching out into the distance until it finally meets either sea or mountain. It’s not really surprising that the main attraction for Vancouver is the great outdoors. When you’re not surrounded by high rise buildings, it’s the distant mountains that dominate the sky. Unfortunately we were confined to downtown Vancouver for our days exploration so we didn’t really get to see the best of what the surrounding areas have to offer. 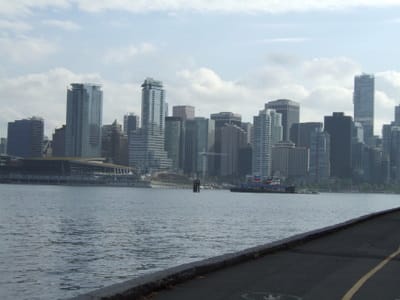 Downtown Vancouver itself has a lot of high rise buildings crammed into a small space. To the West you have Davies St which offers some great restaurants with food from all corners of the globe. Cutting across the city you have Granville St which is a good place to find some of the big shops. On the East side, where we were staying, the city is less pleasant. Vancouver has a massive homeless problem. It’s impossible to avoid beggars wandering the streets – the vast majority of whom clearly have some mental issues.  It’s quite disturbing watching some picking up all the cigarette butts on the pavement and others engaging in obscure behaviour like constantly ‘throwing out a fishing line and reeling it in’ as cars pass by in the street.

I could swear most of the rest of the people out on the streets in that area were quite stoned – including our incredibly smiley pizza server, and the guy on reception in our ‘hotel’ which would barely qualify as a hostel While the clearly inebriated guy slowly filled out forms he enlightened us that it was his birthday. Our sincere commiserations on spending it working in such a dive. Unfortunately, despite his comments on how we must be very tired after all the travel, and our clear lack of interest in doing anything other than just getting checked in – he was in a chatty mood and terribly fascinated by Brodie’s unusual surname. Eventually we wrested the key to the room from him, got an explanation on how the bizarre taps worked, and were left to get some much needed rest.

Escaping the concrete jungle, the nicest part of Vancouver that we got to see the next day was Stanley Park at the North end. This is a vast recreational area with a 10km route winding around the edge where pedestrians, skaters and cyclists circle around.  t offers the best views of the surrounding mountains and sea. We had our obligatory random meeting of someone from back home there when a school friend of mine who was on a 2 week holiday happened to cycle past the bench we were sitting on and recognised me. Which was quite impressive as we’ve only met once since leaving school over 10 years ago. 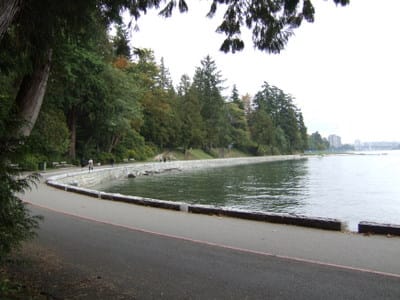 And that concluded our quick introduction to Vancouver. Overall, I definitely preferred Montreal and Toronto to what I saw of Vancouver. But beyond downtown Vancouver there’s a vast wilderness close by just waiting to be explored, along with plenty of mountains for skiing and boarding. The consistent thing throughout Canada is the feeling of great openness and space. I’d be quite happy to spend a lot more time getting better acquainted with it. Apparently so would Brodie, as he threw himself (rucksack and all) down the hostel stairs in a grand attempt to break enough limbs to keep him there on the last morning. He failed to break any limbs, but turned a nice shade of black and blue down one side to keep as a souvenir of his efforts. 10 out of 10 for effort.