A long week, but we have moved house

There have been quite a few bumps along the way, but we have moved house. Finally. It has not been pretty, but it’s done. Tick that item off the list. We’re shaking off the renter/landlord shackles and taking back up the house owner reigns.

We’ve moved house four times in the last few years. First move was to here from literally up the road. Very little furniture. Difficulty level – simple. A leisurely move of several car loads. Second move was from here towards the city. Difficulty level – easy. Complicated due to the snow that started falling as we moved about a quarter of our possessions out. We found ourselves stranded in a rental house for a couple of weeks where the heating did not work, and we couldn’t get back to retrieve our warmest clothing. Third move was from the city to the southside with a baby. Difficulty level – medium. Much of our possessions had been purged by now. Like travelling, moving house has a way of convincing you that you really don’t need so many possessions. However the baby alone accounted for more than half of the items that required transport to our new abode.

Move number four with a toddler and some heavy pieces of furniture was clearly going to involve more than just our own set of wheels to take us all the way back again to the very north of the county. There was no disagreement, we were hiring help for this move. So off I went to get some quotes for house moving. Any responses involving someone coming out to assess the workload were immediately dropped. Followed promptly by the ones who considered themselves an elite moving corporation, and charged accordingly. It wasn’t all going to fit in our car, but if we were that loaded we wouldn’t be living in rental accommodation in the first place. The cost-effective option remaining was your stereotypical ‘man and a van’. I never thought I’d ever respond to an email asking ‘how many men do you want to order?’, but I did. The answer was two, in case you’re wondering. Originally the other half was starting a new job the week before and was probably going to be unavailable when we got our surprise move date. As it turned out, he’d already quit that job and was off for a couple of days before starting his new new job. We were already exhausted from running about packing badly, so we were happy to leave our two new friends to grab anything that wasn’t affixed to a wall. They quickly and efficiently stashed as much as they could fit into their van. If you’re looking for a man (or two) with a van, talk to ManVan.ie. They also know how to dissassemble and reassemble recliner sofas the easy way. (I know now too, it only took a very time-consuming failed attempt where I unscrewed a bazillion screws before youtube showed me the error of my ways… and I had to rebuild an uncooperative sofa again). In hindsight, despite all that did make it into the van, there were still many more carloads of smaller items left. Next(!) time, I’d opt for a second van load a couple of days later. And maybe be organised enough to have time to pack efficiently beforehand. Still, one way or another, we and our belongings were all relocated a few days later, leaving one empty house to scour clean before handing back keys, and a cluttered eyesore to rest our weary heads in.

So, this is now home (again). It was not left in a particularly attractive state for us. 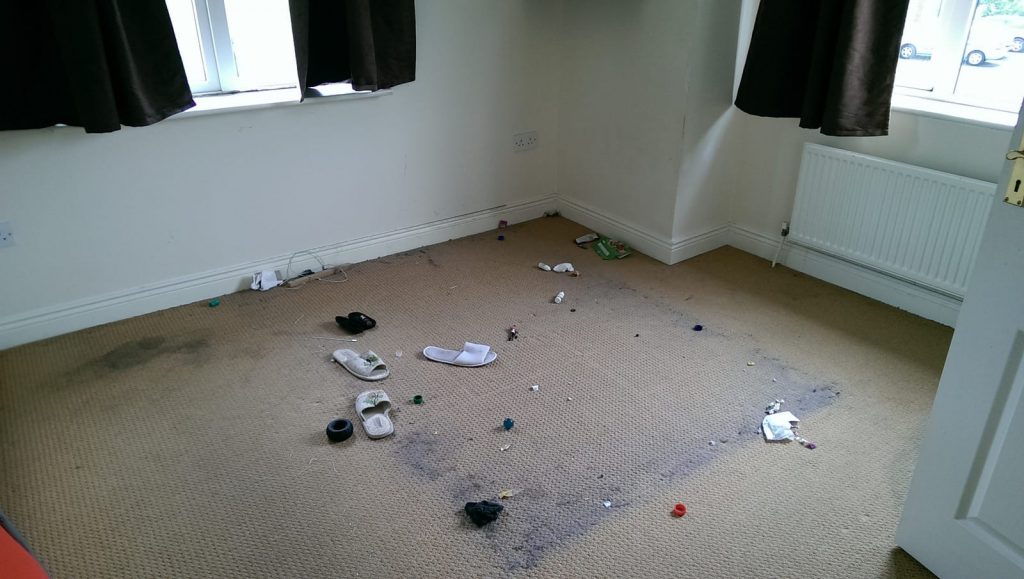 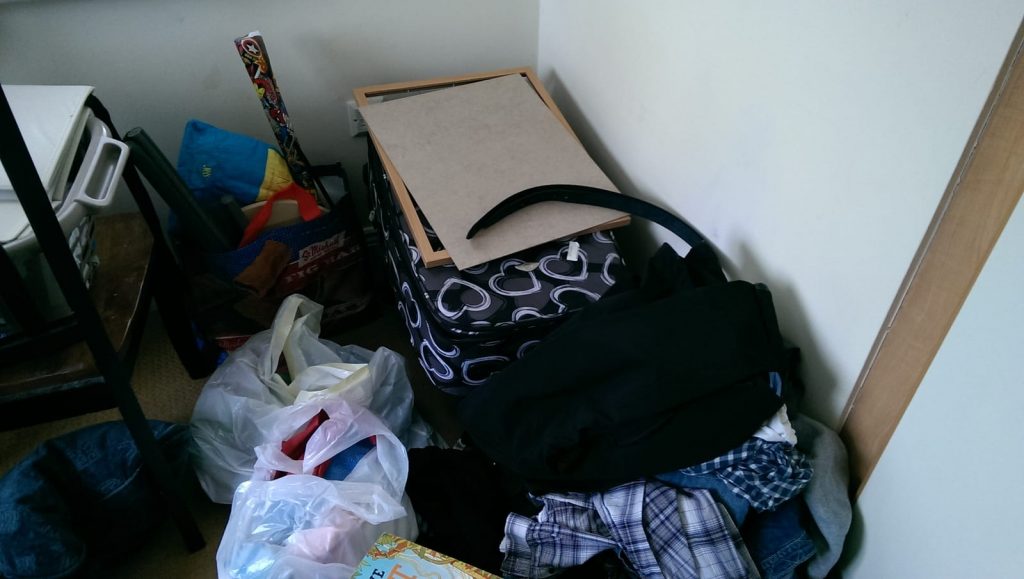 We have had no gas (or hot water, or oven or hob) for five days. We have no bin service yet – the remains of our dinners are covertly disposed of in random litter bins on the side of the road. The bottle and clothing banks nearby are getting daily deposits as I sort through what’s been discarded by the tenants as not worth bringing with them. We are falling over piles of junk in every room.  Must get around to hiring a skip. The newly replastered portions of walls make the interior of the house look like it has a bad case of chicken pox. The garden is a minefield with piles of junk everywhere – pieces of partially dismantled furniture, sheets of wood, bags of jam jars that smell like they were used for brewing illicit beverages. The carpeting has so many unidentifiable stains that we’re wary of walking around barefoot, it’s literally coming to pieces as we wait for new carpet to arrive and replace it. Appliances and cupboards remain partially filled with random filthy objects and an unbecoming layer of dust and grime. 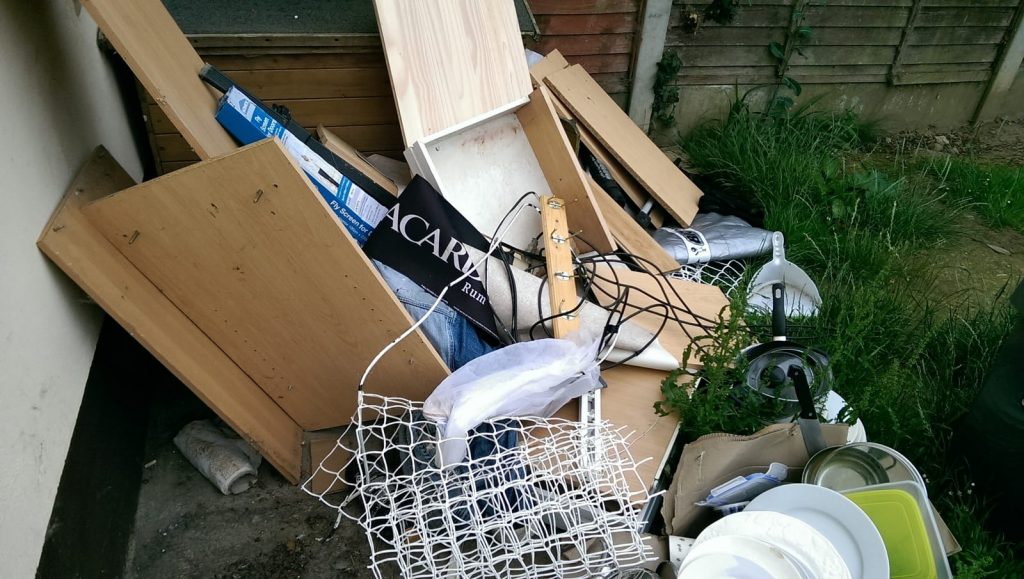 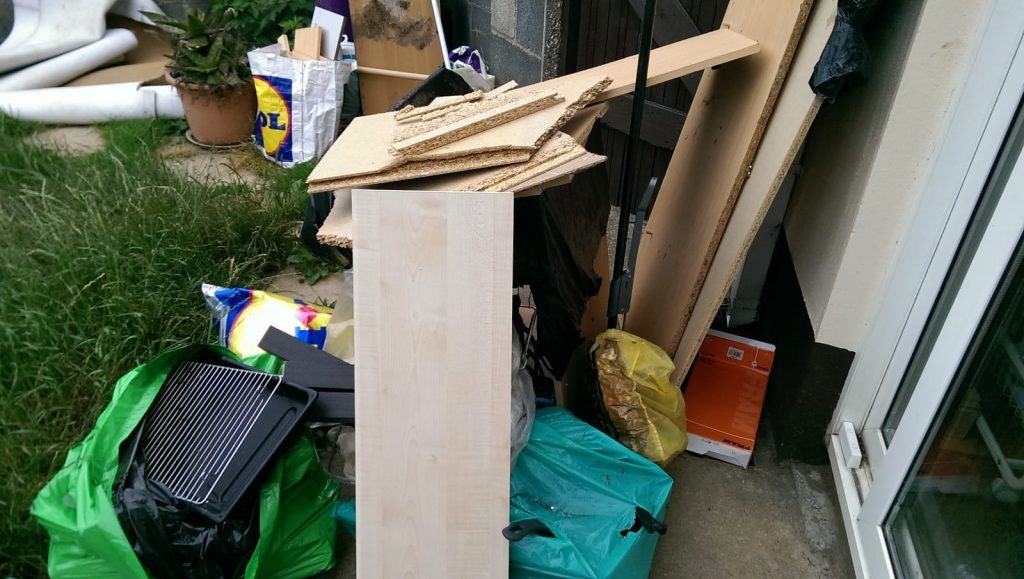 There are boxes and suitcases filled with our belongings everywhere. I can’t find anything I look for. I have called umpteen different service providers to update my current address. Updating our bank accounts, all with one single bank, involved talking to a minimum three departments each. There are to-do lists of to-do lists. Scheduling things to be done over the next couple of weeks is a massive project management undertaking. My poor neglected toddler is living dangerously ‘playing’ with whatever he happens to find buried in the next room while I attempt to paint scarred walls quickly, but properly. It’s a rush to paint before the new carpet arrives. There’s this odd sense of deja vu living back in what was our home for some years, became the home of others who didn’t take good care of it, and is now ours once more. The local petrol station is gone, Lidl has arrived in the area. The private bus network has flourished and considerably cut the horrendous work commute. Our favourite restaurants are still here (we know, because we’ve had to eat out every night so far due to the lack of gas for cooking). The names of shops and stores have changed, but the products inside still seem to be the same. We’re a different version of the us that once lived here. And the two of us have become three of us. Everything is the same and familiar, yet it’s also new and strange. We have cleared a little corner of habitable space. Just don’t look behind any doors! But… we’re here. We made it. Lots done, lots more to do. And then, when we finally have a presentable house to call a home… we plan to sell it, buy another, and start the whole moving and ‘fixing up’ process again. But that’s a plan for another day. Today, we’ll just focus on tomorrow. By the end of the week, perhaps I can cook our dinners again.  Wash some clothes. Perhaps we’ll even be able to shower?! We’ll take the small victories this week.