When your toddler sabotages your pumpkin carving

I’ve never even bought a pumpkin before. They just weren’t part of Halloween traditions in my house when I was growing up. But this year, I have a toddler obsessed with pumpkins. They’re everywhere this time of year, and he points out every single one of them to me. So when we saw them on special offer in Lidl, I decided to give it a go. There has been a lot of excitement (from the toddler) about the prospect of making this pumpkin. Not having a clue how to actually do pumpkin carving, I did my research on the internet. Admittedly I only looked at two pages, but I wasn’t aiming for a very accomplished end result

Step 1. Find serrated knife and cut a lid into the top of the pumpkin, holding the knife at an angle so that the lid won’t fall in later. Success!

Pry the lid off and use the knife to cut it smooth.

Our first look at the inside of a pumpkin. It looked… slimy.

Step 2. Take a spoon and start scooping out the insides. After a few minutes, reluctantly find myself scraping out gunk with my hands.

One bowl for general slime. One bowl for slimy seeds which the internet claims are great toasted.

Step 3. Decide that the scooping out part is taking forever. Return to the internet which helpfully suggests an icecream scoop. Definitely the way to go.

Step 4. Declare the insides removed and get a black marker out. Negotiate with the toddler about about what it should look like. Draw several designs on paper before he decides he wants the first one. Roughly mark the outline on the pumpkin.

Step 5. Feel quite proud that you’ve got this far without completely destroying the pumpkin. You’re on the homeward stretch now. It might even turn out okay.

Step 6. Fetch a knife and prepare to start carving. At this point, the toddler starts screaming. The kind of scream where he’s totally horrified and outraged that you’re doing something you thought was totally reasonable.

Step 7. Start a long discussion where it transpires that after watching you spend a good hour preparing this pumpkin for carving, your toddler is quite adamant that you will NOT be doing any carving. Sure there’s a perfectly good face drawn on with marker already.

Step 8. Go back to the internet and wow your toddler with pictures of all the cool carved pumpkins lit up with candles and explain that this requires cutting out the face.

Step 9. The toddler informs you that no, you are still not carving this pumpkin. Regardless of how cool all those internet ones are. 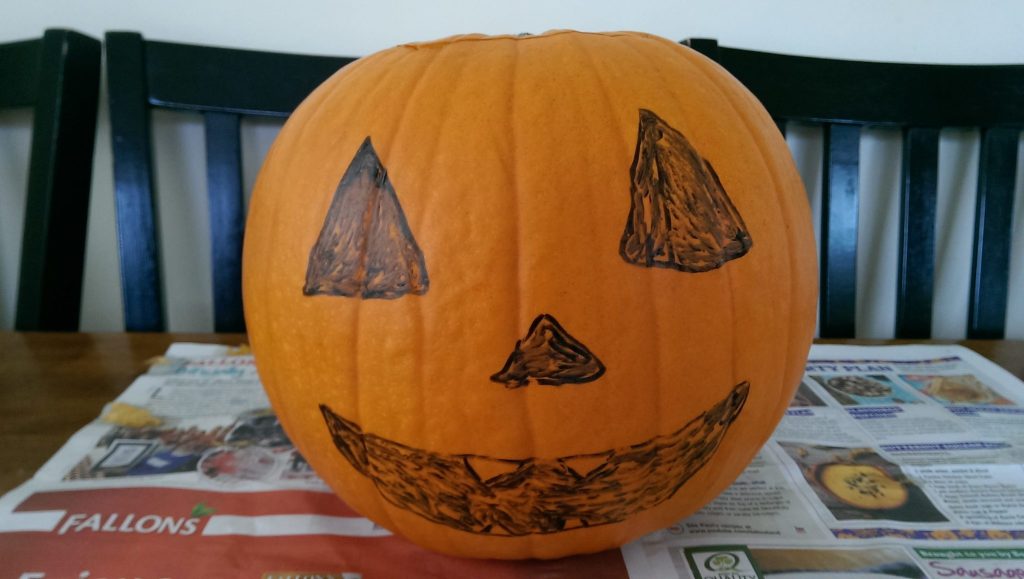 Step 10. Give up. Scribble in the rest of the face on with a crappy black marker. Point out to the toddler that it’s not a particularly great pumpkin like this. He disagrees.

Step 11. Clean up the pumpkin mess. Set aside the seeds for toasting later in the hope of salvaging something out of all that unnecessary mess and effort.

Step 12. Swear you’re not going to waste your time doing ‘crafty’ shit with your toddler ever again.

So there you go  – our first ever pumpkin carving… without any actual carving!